LM: Aftercharge is a 3 vs 3 online competitive game in which one side is made of invisible robots and the other is made of invincible guards. It has a lot of cat and mouse game elements to it. If you love shooters, bright lights and asymmetrical games, you should enjoy it.

Could you tell us a bit about the lore behind this conflict, the humans battling against the robots?

LM: A long time ago, an energy company called Aftercharge found the planet Dusk 11 where an infinite source of energy existed. They created a special line of worker robots called the workonics to settle and build automated energy extractors all over the planet to exploit it. Once the job was done, they left the planet, leaving the robots behind, discarded.

After decades, the robots were reactivated by seismic activity on the planet. Now that they are back up, they are mad at their creators for leaving them behind. Attacking the extractors and destroying them is a way to get their attention. Learning about this, Aftercharge sends enforcer to stop that uprising.

What sort of modes are present in the game upon launch, are more planned for later?

LM: Right now we have THE mode. Aftercharge is all about the 3 vs 3 mode where one side destroys and the other protects. This is not just a game mode, it’s the core of what makes Aftercharge different. We do have plans for other modes in the future but we’re not making any announcements. 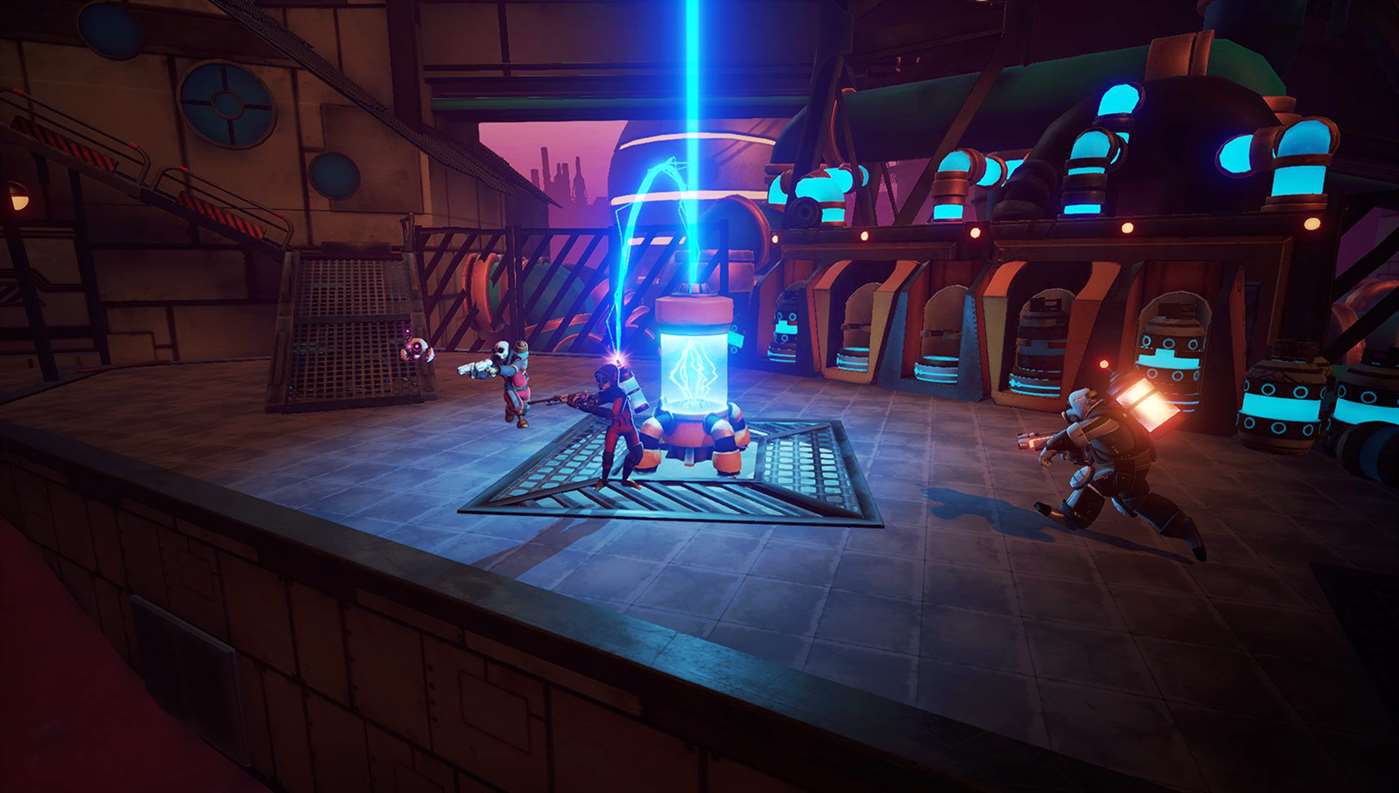 Could you give us a brief overview or the two factions in terms of what tools they have, do you have a favorite item you like to deploy from either side?

LM: So, on both sides, players can choose between 5 characters, each with their own abilities. Each team has the core abilities relevant to their side — workonics or enforcers. Robots are all invisible, they can all revive each other.

Guards all have two different abilities and must recharge their weapons at the extractors. I play a lot of Liquidator on the enforcer side. One of his ability is a tracker shot he can apply on a robot to keep track of it, it’s really useful when your enemy is invisible.

There are a number of maps present, what sort of environments will we be competing in and what were some core design philosophies when developing them?

LM: In every map, we try something different in the layout so the strategies employed must be different. For example, our map Refinery is multi-layered with 3 set heights players can fight on, and Glacier has trenches that are very dangerous for robots to go through. In terms of environment, you’ll be exploring different areas of Dusk 11. You’ll see it’s quite a diverse planet. 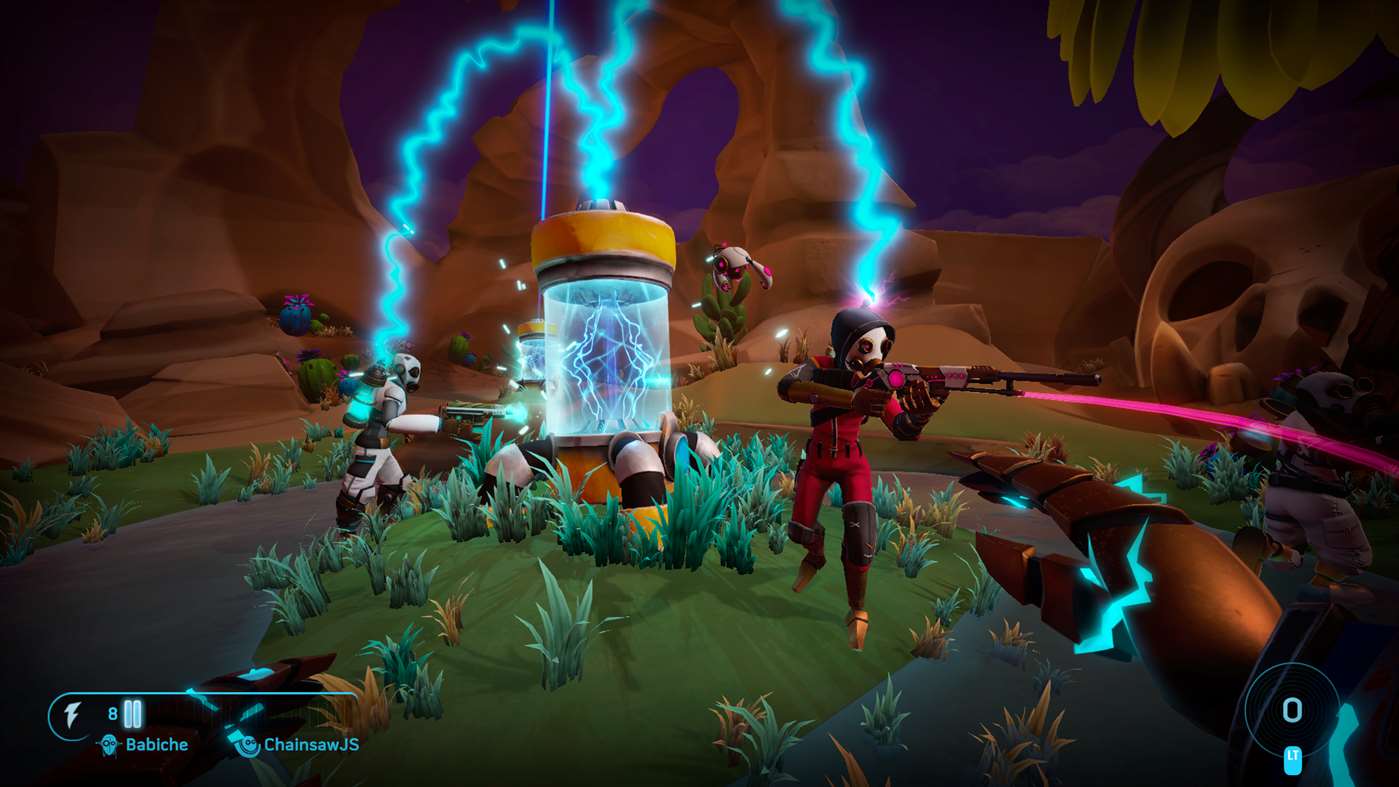 This is a very different type of multiplayer game featuring more strategic and less violent gameplay. Was the specific style of competitive play to make it more appropriate for all ages or was it generally a design choice?

LM: To be honest, we didn’t really aim for that to happen, but we know our game is one of the friendliest shooters out there. Only one of the two sides have guns and they are shooting objects ( robots ) and not other humans… and they are not even destroying them, only turning them off. We think that having small teams ( 3 ) will also help groups of friends to play together and create, I think, a better competitive environment. One that’s less toxic than other games, hopefully!

I really like the setup of humans needing energy to be effective and robots being invisible until they get “spotted”, was there difficulty in balancing the two sides?

LM: Oh it is! It will always be difficult. We’re already working on some tweaks at the moment. It’s hard but it’s a fun challenge. The biggest challenge comes from the fact that new players are learning enforcer way faster. So at first enforcers win more but when people get to learn the robots better, it evens out. For launch, I think we attained the best balance ever with only a 57% win rate for enforcers vs. robots.

The title is set to be on Xbox Game Pass, do you feel this service will be beneficial to the release of Aftercharge on Xbox One consoles?

LM: Of course, it’s a HUGE help. We get hundreds and hundreds of new players every day, we get visibility on the store, and we get help from Microsoft. We couldn’t have asked for a better deal. 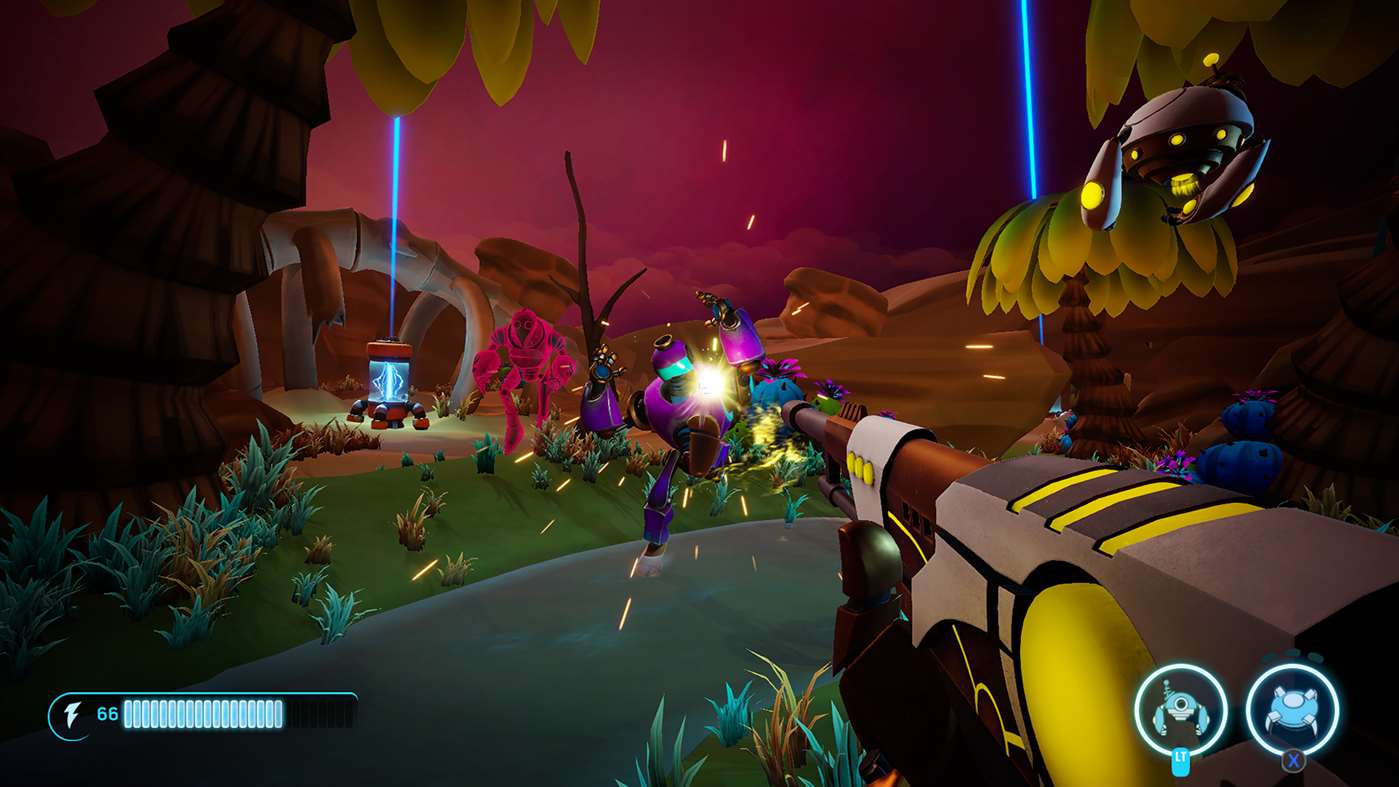 The gaming space is always crowded, what is a specific aspect of Aftercharge that you feel will most likely entice players to check it out?

LM: Its unique mechanics. We feel that people have played shooters over and over and while they like the genre, many games are pretty much doing the same. There are different maps, different visuals and different characters but it’s the same game at the core. Our game is very different it’s only half-shooter. I hope they’ll like the breath of fresh air in that genre we love.

LM: The game is live now! If you think it’s up your alley, please check it out. We have a GREAT community going on on Discord, you can join even if you don’t purchase the game and chat directly with our other players and see what they have to say about the game ; ) www.discord.gg/aftercharge