We're now introducing a series of paid promotional options for Publishers, Developers and everyone else that has content they would like promote or advertise on Gamerheadquarters which reaches 60,000+ unique average viewers each month in primary regions across the world. Adsense noted almost 11 million page views for 2019. Our giveaways include over 2500 regular users.

We also have a Youtube channel we work with over 43,000 subscribers that's focused on gaming content. We have a number of options available below, reach out to "jasonstettner @ gamerheadquarters.com" to inquire about any of the packages which are all in USD and fairly affordable. This will help support the work we do on the site and help it grow further.

Sponsored Review or Sponsored Video Content
-Send us an email with details of what you're looking to have displayed and we can go from there. We offer options for paid promotional game, tech, movie reviews, articles showcasing content as well as video content in a review format. The video style is gameplay review which is typically a ten or twenty minute informative commentary on the specific game. You can see an example of the sponsored video below (that sponsorship value was $3.68 USD per 1000 views). We also now offer in-video integration mentions as well.

Promoted Above Nav "1 Month" ($1750)
-This an image or animation style banner shown above the nav/header part of the site. Can be viewed on desktop or mobile on almost all pages. It can be linked to a site when clicked upon. Image example below with the grey boxes being an example area. 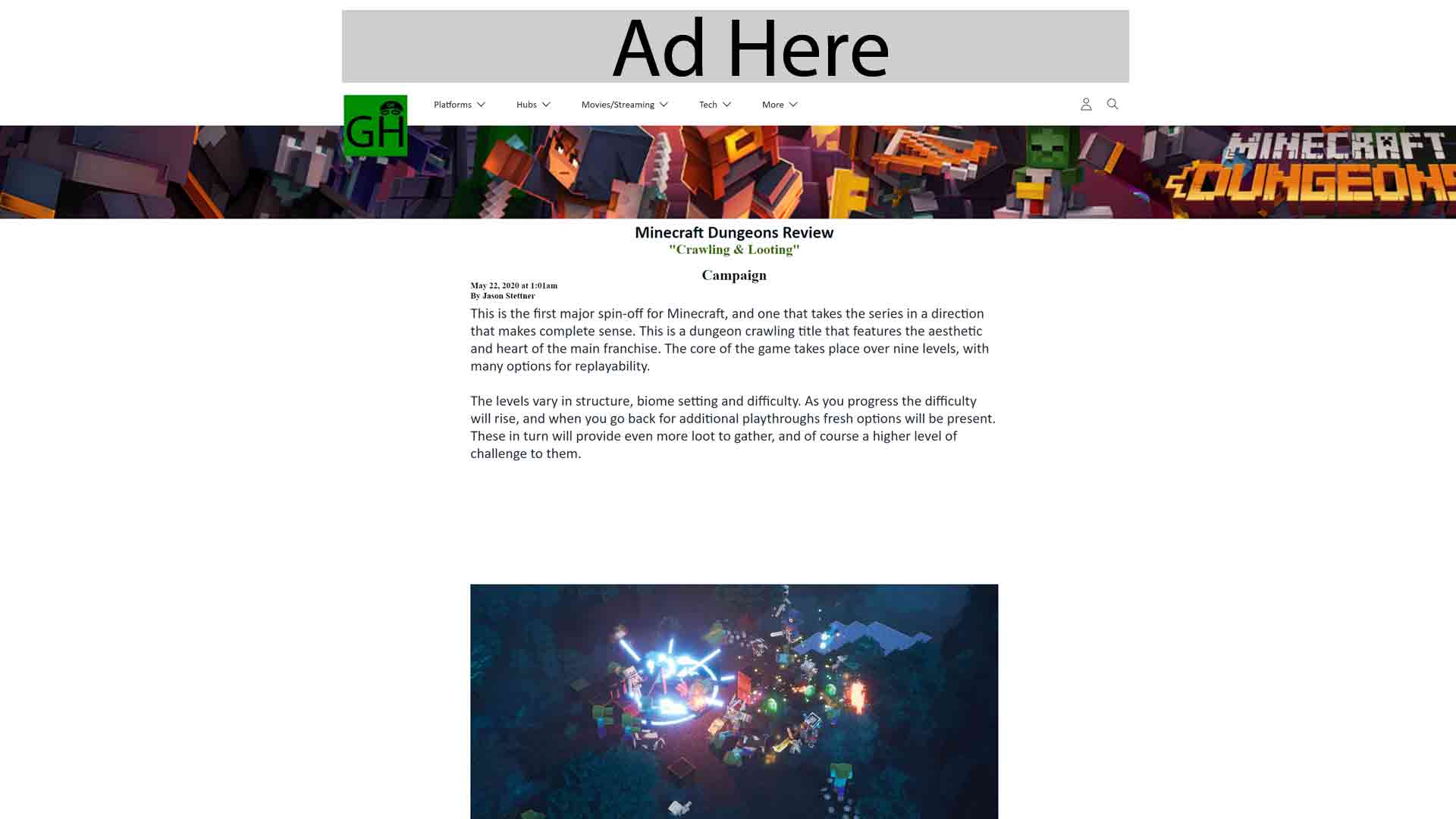 Promoted Wrapper "1 Month" ($1550)
-This is an image style ad shown across all of the article pages of the site, doesn't show up on mobile. Instead an advertisement banner can also be given and placed above the article titles for mobile devices, with the same features to follow. Like many sites it is a wrapper that can be of an image style taking up the left and right hand sides of the pages. It can be linked to a site when clicked upon. Image example below with the grey boxes being an example area. 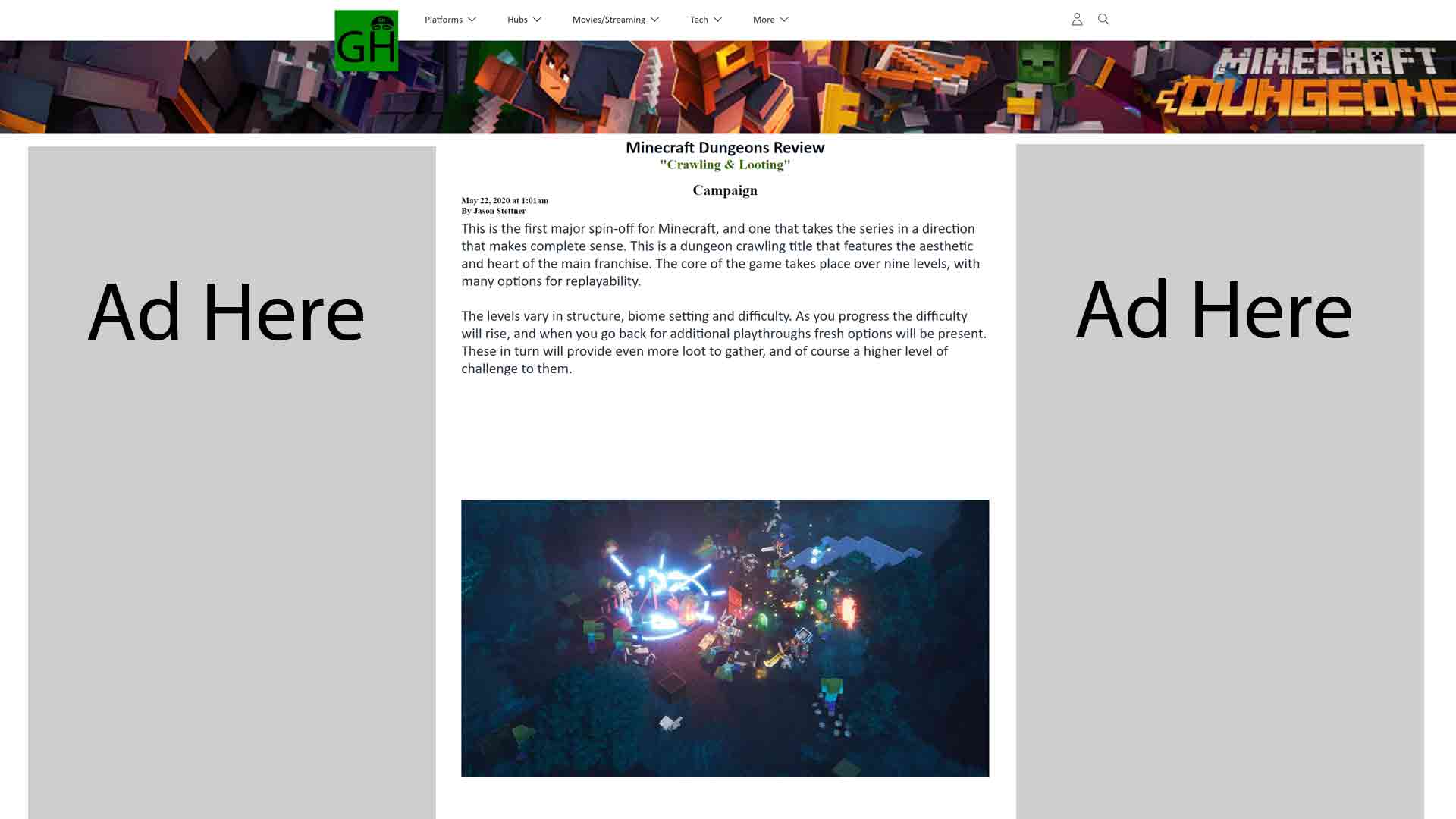 Promoted In-Article "1 Month" ($700)
-This is an image style ad shown across all of the article pages of the site. This in-article option is shown on all devices as the primary viewing ad showcased on the pages. It is often nestled above an image or within text. It can be linked to a site when clicked upon. Image example below with the grey box being an example area. 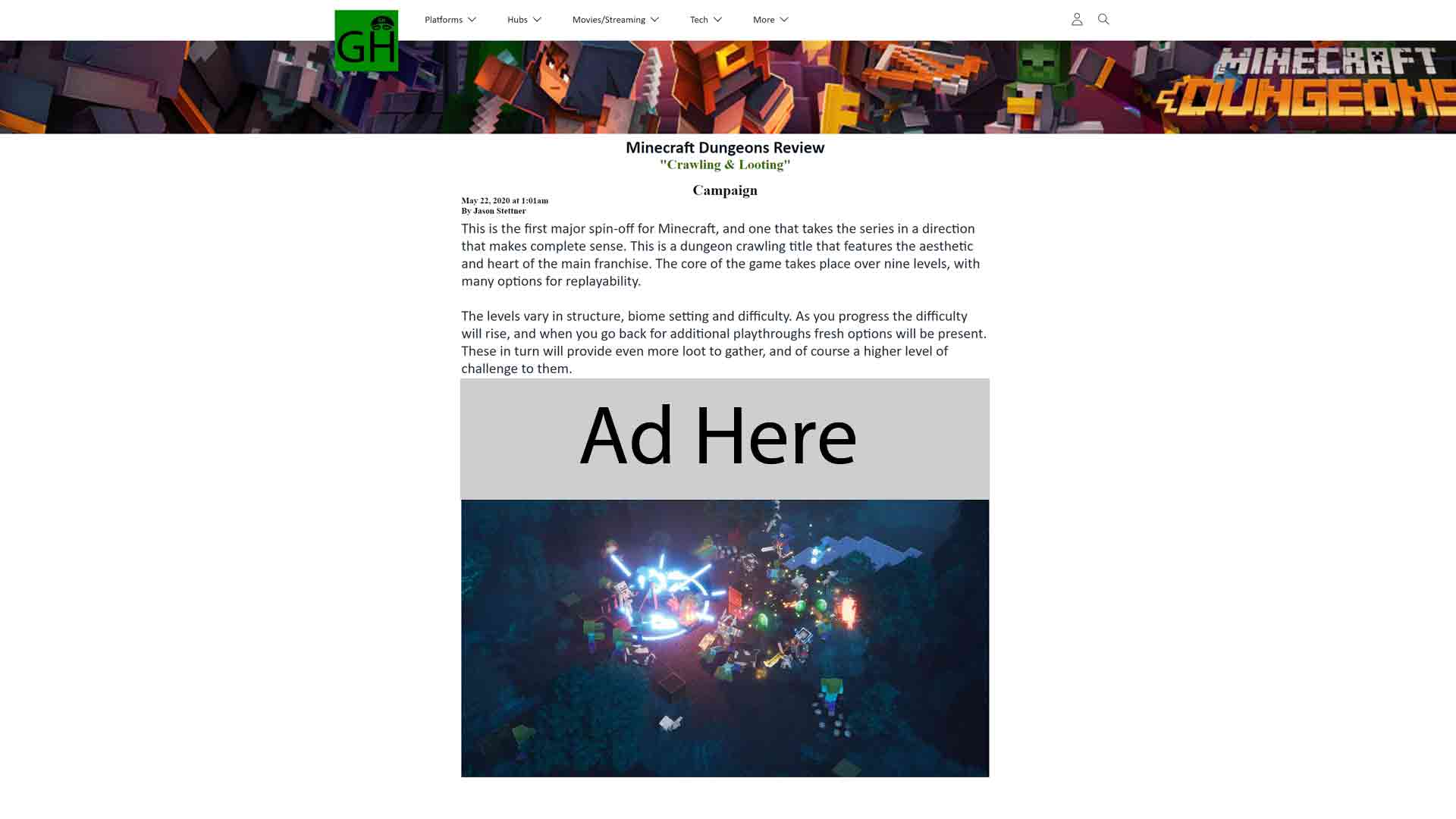 Front Mini Right Image/Video "1 Week" ($30)
-This is where the video on the front page usually is, for desktop browsers only. Large bright image or video of your choosing on right hand side of the screen.

Game Indexing ($5)
-Have details about your game available on the site, a page dedicated to your game whether that's a video game or a board game. This includes full games, mobile titles, or anything tabletop such as board or card based. Example: Halo Infinite Page

Article Posting ($37)
-An article posting going over details about your game, movie, tech or event. Can include an embed video and link to store pages, due to being a sponsored posting externals links are Rel nofollow. The article will be listed as being "sponsored".

Promoted Movie "1 Week" ($35)
-This is the promoted image found in the navigation bar under movies boldy shown on all devices, the time to get the image and link changed is quick. The link can be set to one of our existing movie or review articles. For $40 it can be directed off-site to a movie page or promotion page for a film and this is up to the discretion of the site.

Front Home Image "1 Week" ($75)
-This is the absolute front of the site with the beautiful full image screen that links to an article on the site. This area is proudly the first thing visitors see on any device, two images are presented with one for desktop and the other mobile. I'll also note that Jens Bergensten of Mojang stated "That's a pretty slick website :)".

Promoted Hub "1 Month" ($50), "2 Months" ($70), "3 Months" ($100)
-This is for the frontpage where all the recent articles, videos and hubs are assembled in square rows. We highlight some games and movies in the hub sections, but don't have room everything. This will get you a spot in that area.

Game/Genre Hub "Longterm" ($35)
-We started hubs in late 2016 which is a place of collection for particular game franchises and games themselves. We have a wide selection of game hubs present on site though there are many games out there and we don't have time to build a space for them all. This is basically a promoted type option where we give a link to your Publisher/Developer/Game page and allow choice of initial video to display. We of course update the page with articles and any new video content we produce or trailers of the titles over time.

Game/Movie List "Short term" ($7)
-The lists are our premier sorting option for players to find games or movies available for their platforms or services. This pushes your particular content as an advertisement to the top of the lists, it will be shown first up for two weeks on all filter lists. The link can go to content on the site or an external link (not for backlinking and limited, it will have a Rel nofollow). The pages are listed below in the long term area.

Game/Movie List "Long term" ($5)
-The lists are our premier sorting option for players to find games available for their platforms or services. We can't include every game as the lists could get too crowded, if you're game isn't listed it's just $5 to have it added as a filter option. Current lists; Xbox Backwards Compatible, Xbox Play Anywhere, Xbox One Game Reviews, Playstation 4 Game Reviews, PC Game Reviews, Nintendo Switch Game Reviews.

More promotion options to come in the future.