Jongtae: We, like half of the gaming world, are big fans of battle royales. The last man standing format is awesome and we love how no two matches ever really play out the same way. But we also know that these games can be really frustrating for some if you don’t have the best shooter skills like reaction speed and aiming.

We wanted to make a battle royale that takes more strategy and item combinations into consideration rather than just the player's hand-eye coordination. We want to broaden the genre by bringing in players who otherwise won’t stand a chance in today’s standard battle royales.

Looking at Battlepalooza, is there any sort of lore and or a background story that sets the stage for this experience?

Jongtae: We were heavily influenced by Ready Player One. The basic premise is that the whole world is connected by the Network. Players are able to move freely around a parallel world and exist everywhere thanks to the Network. The concept of boundaries does not exist in the Network, anyone can be anything, anywhere can be everywhere.

Most of the denizens of the Network participate in the Battlepalooza game show, where anyone can participate. There are many reasons to participate, some want fame, some participate just to watch, some just enjoy the game, but most players participate in order to get the chance to win the grand prize.

Tonally, we chose the more light-hearted route. At the very core of Battlepalooza, we never want people to forget that it is a game -- it should be fun and social. It isn’t about saving the universe or anything heavy or gritty.

The game is infused with zany characters, like a robot bear, a pixelated chicken, and an even character that is made up of beat-up old cardboard boxes. We have even wilder weapons, like you can throw a sticky honeycomb at your opponent to slow their movement, summon Tetris-like blocks to barricade in your opponent, or hex your opponent that temporarily turns him into a kitten cat who can’t do anything but run away. 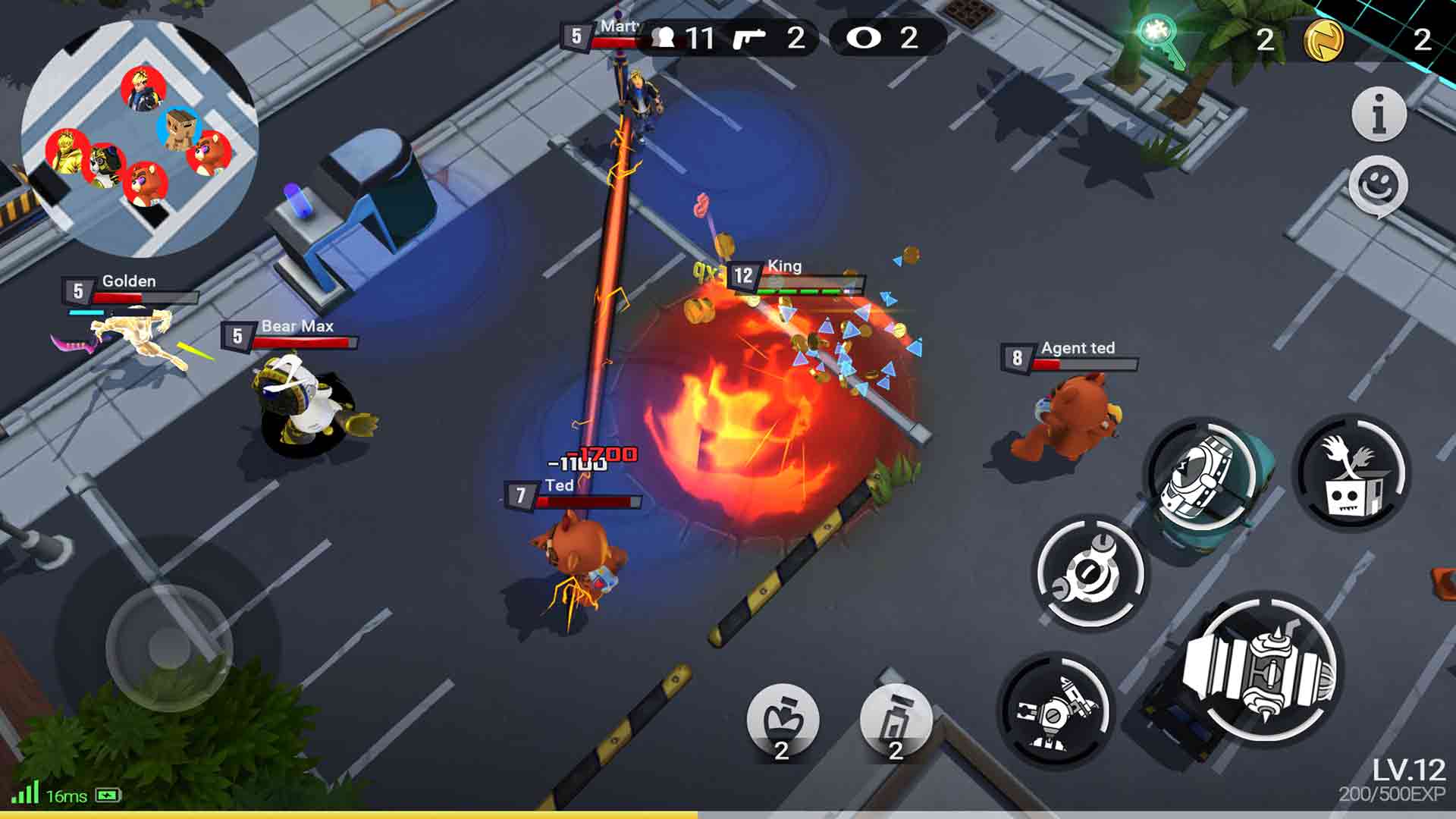 To quickly get an idea of the setup, being in the battle royale genre tell us a bit about how matches start and progress, alongside the quantity of players facing off?

Jongtae: Players create their own loadouts and participate in Battlepalooza by selecting their characters, weapons, and various combination items from their inventory. Currently, up to 24 players can participate in a match. When the match starts, players are randomly spawned at the edge of the game map. Players can acquire experience points, HP potions, and energy potions from special objects in the map, and level up their characters and equipment to better their chances of survival.

We want to layer on this additional mid-match progression and strategic element that is common in MOBA into our battle royale design. To win, players will have to farm for resources, think strategically, and invest in skills or items mid-match to gain an advantage. This is one of the ways we’re making Battlepalooza more accessible. So if you don’t have the same twitch skill as a 14-year-old, you still have a good chance of winning this battle royale game.

Could you go over the UI, general types of weapons and how players battle against one another in general matches?

Jongtae: Players can create their own playstyle by combining characters and items from the inventory. The characters and items have a skin system, so players can decorate their weapons according to their own taste. The shop offers products that help players grow every day. Battlepalooza supports not only solo but also team mode. When players create a team, they can play with their friends using a team code and communicate with each other through chat and emoji.

The use of Google Maps geospatial data is fascinating, could you tell us how this works to provide real world cities to battle in?

Jongtae: Through a partnership with Google Maps, we were able to implement real-world data in the game, and customized it for game level design. The road composition of the game map of Battlepalooza has the same composition of actual streets.

In addition, players can see real location names provided by Google Maps in the game. We believe that these elements will enhance the player experience and will help the player get more immersed in the game. We will further add more to this immersion by actively using these real data for new city maps in the future. 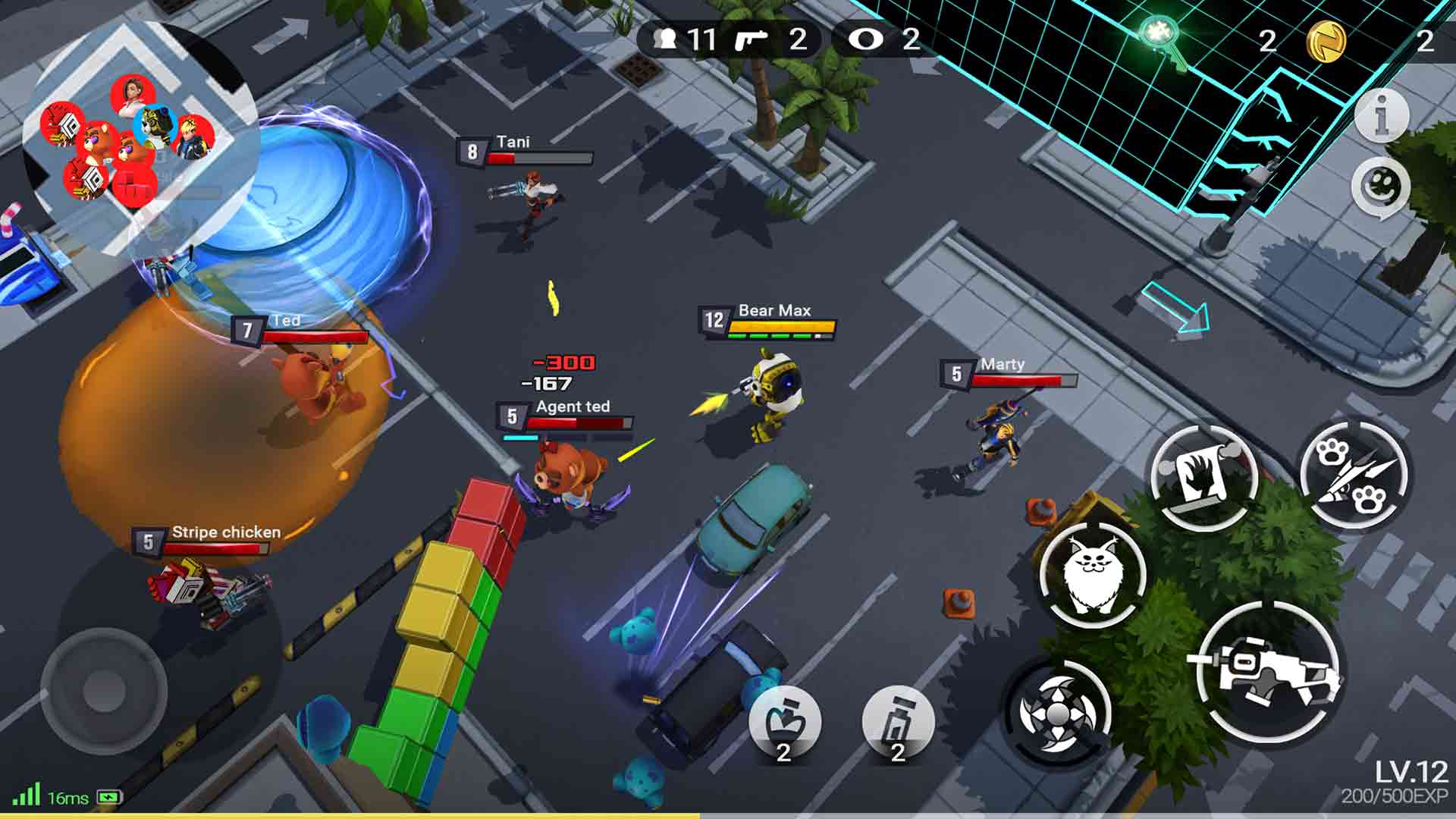 It would be great to hear more about the types of gear, and skins that are present within this one alongside how players acquire this content?

Jongtae: In Battlepalooza, players can obtain NCoins by winning the battle royale. With these NCoins, players can purchase special themed skins for characters and weapons. Players can also exchange the skins back for NCoins with other players in our marketplace. We have also made some skills available purchasable by other goods, so players do not have to worry too much about not being the top dog in the game.

The battle royale genre has become very busy these days, what sort of unique features do you feel helps make Battlepalooza stand out from the crowd?

Jongtae: Battlepalooza has less demand for control than other battle royale games. The game has RPG-like character equipment loadout system that allows players to equip different skills, weapons, and a variety of crazy items before entering the arena. This allows players to pursue the use of weapons and items in a more strategic and in a timely manner.

We want to provide a fun experience while playing with a strategy rather than a game that requires pure twitch skills. The prizing system is also unique in which players can collect NCoins and unique skins that can be traded in the game’s marketplace. And also, we have arenas that are based on actual real-world locations, so that’s a bit different, which we think is more immersive.

Jongtae: The team behind the creation of the game had a ton of fun while designing and developing Battlepalooza. We enjoyed testing the various types of items and there were a lot of funny and breath taking scenarios along the road. We think our players will be able to enjoy the game even more if they challenge themselves creatively by combining various items and teamplays.