Maciek: First of all, Bee Simulator itself is a very unique project. It merges an action game with elements of simulation and education. For a significant part of the team it is the first full-scale game that they have been involved in. The team itself is another interesting feature of Varsav Game Studios.

At the beginning it consisted of almost only women, currently the team is around 30 developers and still about half of them and almost all managers are women. Quite unique proportion in game development. The cooperation of battle tested veterans with “newbees”, who are full of ideas and youthful energy, gave us Bee Simulator. Have fun! We had a great time working on the game, now it's players turn.

Where did the idea behind presenting bees in a simulator setup come from?

Maciek: The original idea for the game, came from the Founder of the company – when he read a book about bees to his daughter. The final design of the game came from the need to make an unusual game, unlike any other, and the desire to prove that games do not always have to be an meaningless entertainment. 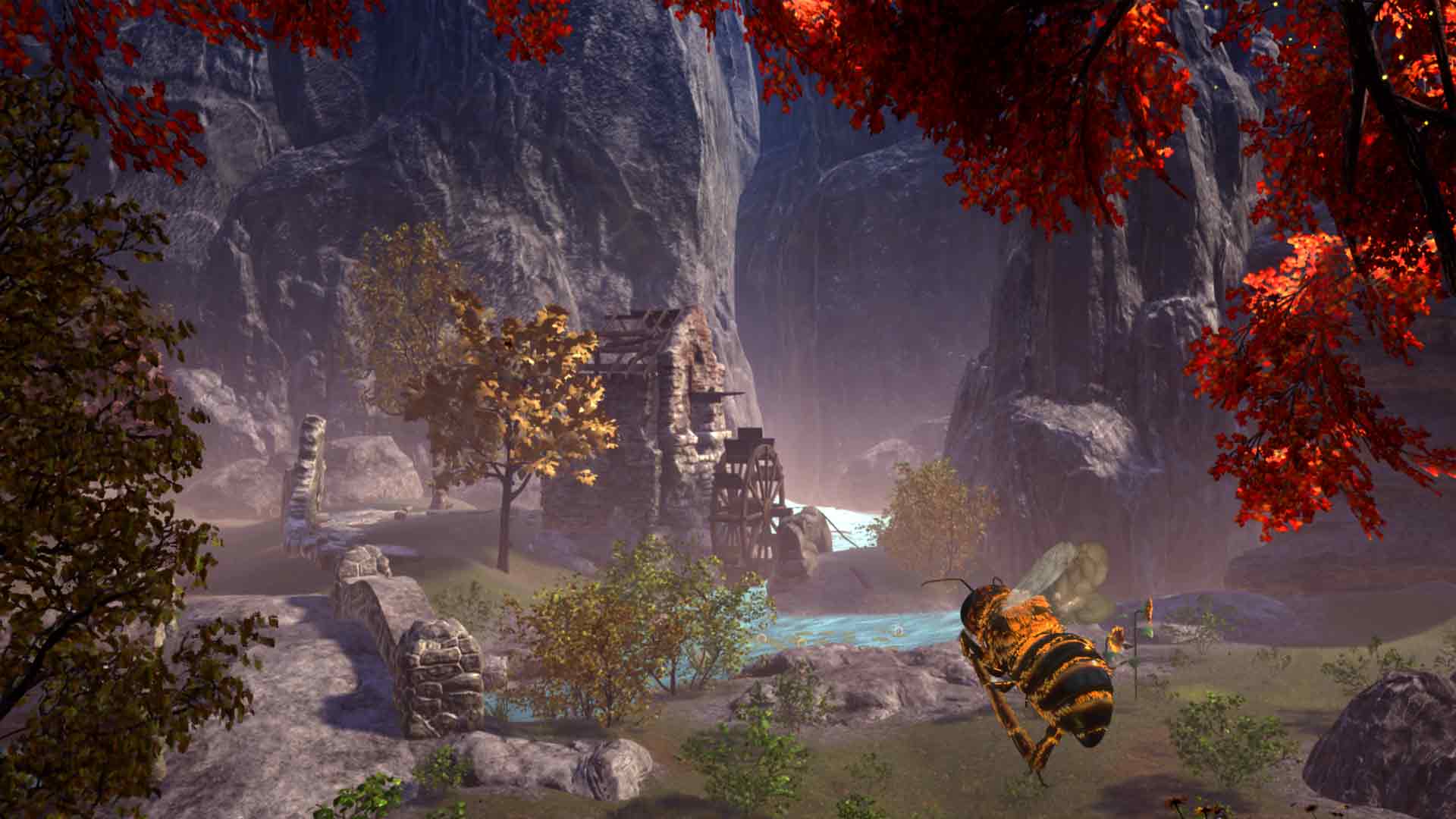 While this is a simulator type game, it does tell a story. What real world inspirations came into play when it comes to the missions you go on?

Maciek: Although from the beginning of development we had a strong belief that the life of a bee is a ready to go scenario written by nature, one of the major challenges at the early stage of production was to find a narrative key, precisely common value for the bees and for human players. The common denominator has become the community value, namely the family.

Bees are a very interesting species, but to tell the truth, for people without a thorough knowledge of their nature, these animals are hardly understandable and have an hermetic model of behavior. Often, when we observe bees, it is difficult to find out what they are doing. Consider, for example, bee dancing. For an outside observer, this behavior is quite strange. One bee swings around her abdomen and the individuals around her seem to be watching in utter silence.

After a thorough study of bee behavior it has been discovered, that this dance is a complicated message encoded in motion, addressed to other workers from the hive. It contains both information that the bee has found a valuable resource, but also shows other bees the direction and distance so that they can find it. There are many such examples. The main story line and the missions in the game revolve around the bee family and the threat that people poses to it. It is a universal tale of cooperation, danger, solidarity and working for a common goal, understandable by both young and adult players.

I really liked that there was an educational aspect to Bee Simulator, what was the research process like and do you feel this was an important addition to the gameplay?

Maciek: This is one of the most important aspects of our game. We tried to combine education harmoniously with the gameplay, in a manner, that would not tire our players. Knowledge about bees is ubiquitous in Bee Simulator: it is present in the gameplay itself, narrative elements, hints, dialogues, side missions, and the glossary. Each member of the team had to read the book The Life of the Bee by Maurice Maeterlinck. This is a great and very interesting work in the field of natural philosophy.

The suthor for decades observed the social life of insects, discovered and explained many of their secrets only by hanging around the meadows with a magnifying glass and almost all his findings are still valid until today. In addition, every Fridaywe were watching films about wildlife and nature programs with the whole team. Plus, last but not least, we had the support of professional beekeepers. Learning about bees was not an unpleasant duty. They is a really fascinating species whose hives are treated by some cultures as one huge organism with common consciousness, despite the fact that it consists of many small individuals.

Could you go over some of the mini games, or well side activities that players can take part in while playing?

Maciek: If someone is in a hurry, they can beat the game in few hours. But we hope that players will not be in a hurry, because there is a whole lot morecool content. Player can race with other insects, fight, dance, we have several special characters, such as a florist and a bully boy. All these mechanics differ in the game modes dedicated to children and adults.

For instance, fighting in children's mode is easier, based on rounds, in adult mode takes place in real time. Most players love our wardrobe, where you can customize the look of your bee. We have side quests and numerous challenges. We have collectors' items. We also have the glossary, which is filled when we meet animals and find plants on the map. We have dozens of species of flora and fauna in the game.

There are rewards and achievements. In addition, we have three separate split-screen maps: city, palm house, and water mill. It is a part of our game specially dedicated to families, intended for parents and children to play together. Plus, after completing the campaign, the game does not end, you can explore as much as you want because free flight and sightseeing alone, pleases many people. 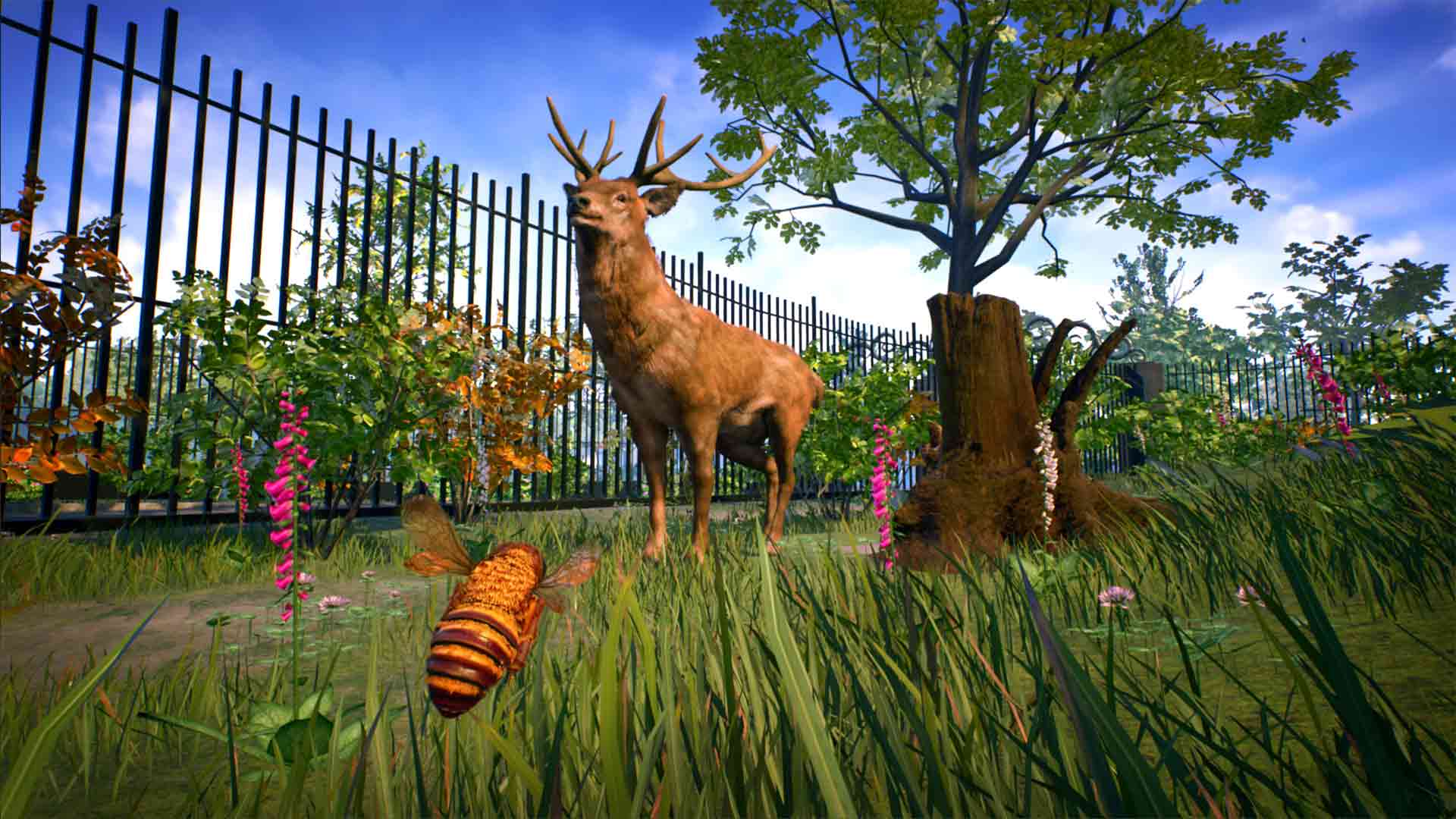 This is a fairly large world to fly through, with many unique areas to visit. How did these locations get picked and what was the process like in filling them up with people or other creatures?

Maciek: This is an aspect of the game that brings us back to our childhood memories. Imagine entering a large sandbox with a huge bucket of toys. You have everything there: people, animals, machines, trees, flowers, cars, buildings, various props, whatnot, you name it. And so you start. You prepare the terrain, make hills, dig cavities, place lakes and create the whole landscape, and then reach into the bucket and set your toys in an interesting scene. Especially if you can put this scene in motion and observe from every angle, add new ideas, change and expand as desired. This is how building the game area looks like. It's fun.

There are some fun easter eggs in this, could you go over the process behind adding those in and if there was a particular reasoning behind a personal favorite?

Maciek: We have several references to mass culture and some internal jokes, but this is something that players must look for themselves, we will not reveal all the details. Maybe you will find a computer game in a computer game, who knows? Anyway, in our game you can interact with various objects and sometimes the effects can be ... funny and amusing. For now, we focused rather on the game base, along with the development of Bee Simulator, more of such motives will appear. We do not lack ideas, that’s for sure.


Where can people go to check out Bee Simulator and play it themselves?

Maciek: Everywhere. Bee Simulator is available on Xbox, PS4, Switch and PC, both in digital and physical distribution. As the Christmas season is approaching, it may be worth looking around, on the store shelves, because we are sure that the Bee Simulator in the box version is an excellent Christmas gift. (smiley face emoticon)

Maciek: You have not mentioned anything about sounds and music, and this is also a respected aspect of our game. The music has been created by MikołajStroiński, the composer of music forgames like The Witcher 3: Wild Hunt or Vanishing Of Ethan Carter and many other famous titles. It illustrates virtually every aspect of our game with separate melodies.

All his compositions has been recorded live by a full-line symphony orchestra, assembled of musicians who are also enthusiasts of computer games. The voices of many Varsav Game Studios team members can be heard in the game. And, what is unique, the game has been translated and localized fully in thirteen language versions.