Jonathan: Colt Canyon is not about the story, but all about the gameplay. I always focus on making games that feel good to play with the story being only incidental or mere there to give the game some context or the player some initial motivation.

Could you tell us a bit about the Colt Canyon story, what kickstarts this adventure and what are the goals as you play?

Jonathan: The game takes place in a Wild West canyon. Your partner gets kidnapped by bandits and now it’s on you to fight your way through this hostile canyon in order to rescue your partner. 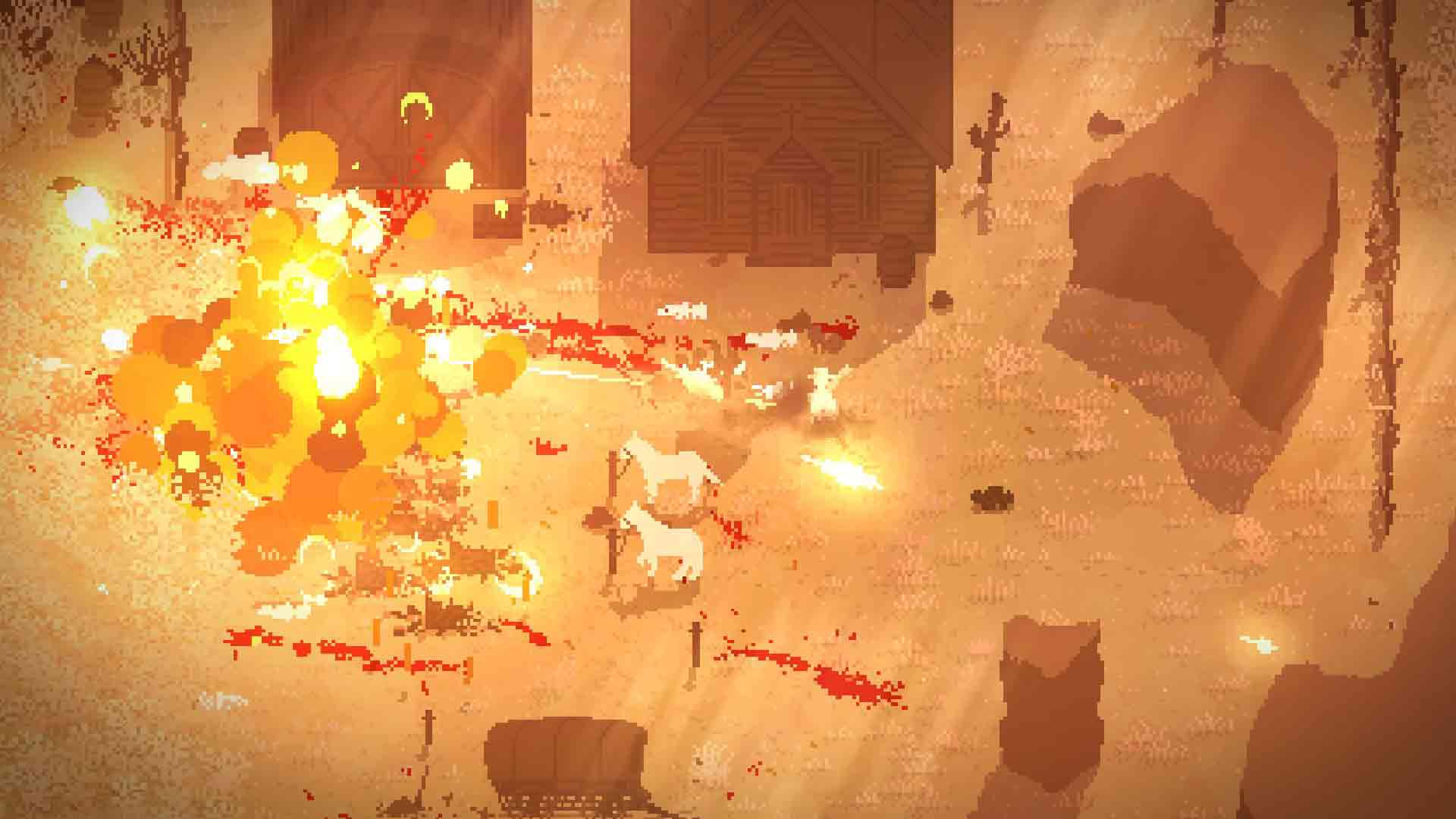 I very much like the visual aesthetics of the game, what was the process like in creating them and were there any inspirations for the style?

Jonathan: Thank you. My first commercial game had a very similar visual style with minimalistic, monochromatic pixel art. I am a huge fan of these aesthetics because they can be mixed well with modern light and particle effects to create visually pleasing imagery, all while not requiring a lot of artistic talent.

This way I can create most of the art and animation for the game on my own. Sometimes it’s not easy to get the pixels right because there is little room for error with so few pixels to work with but on the other hand you can also save a lot of time by only having to animate silhouettes.

The color palette was inspired by the game Sandstorm by Daniel Linssen. I just really like how well it is able to convey the feeling of a desert with so little detail.

The setting is really interesting, and I liked the variety within the environments. Was an authentic atmosphere important for this western type game?

Jonathan: Yes, getting the atmosphere to where it is now played a big role in the development of Colt Canyon. As mentioned, the color palette and visual style already provided us with a solid base for a desert-y atmosphere.

But really the subtle particle effects, animations and sound effects are what makes this canyon so atmospheric. I think it’s important to capture this atmosphere right because the game is not always about shooting and action, and the calmer parts of the game only work and are enjoyable when the atmosphere and mood feels authentic.

With this having rogue-like elements could you go over how that works in gameplay and the permadeath factor?

Jonathan: Colt Canyon is a skill-based action roguelike with real-time combat. You must get familiar with the game and all its mechanics in order to successfully rescue your partner. The game might seem simple and random at first, but after some time you will notice that most things follow certain rules and have a surprising amount of complexity that you have to get familiar with.

With every death you learn new stuff that will give you that little bit of extra information for your next run. Unlocking new characters or starting loadouts will only help you if you know how to use them. This game is not about grinding a couple hours to unlock a permanent upgrade that will help you with your next run. In your very first run you already have everything you need to successfully complete it available to you. 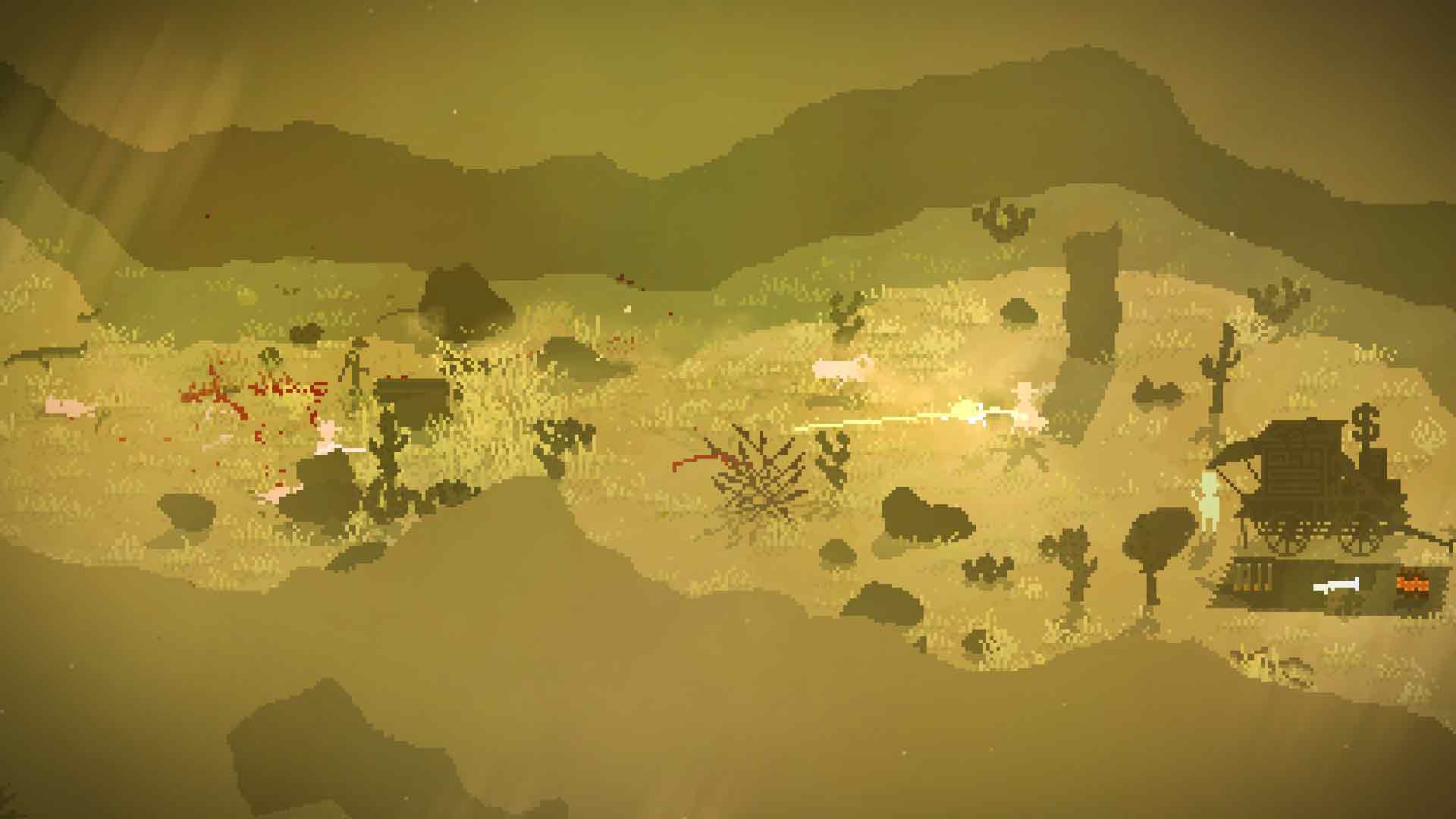 I found the companion system to be interesting, for those unfamiliar with it could you describe how that works and what other options are present if you don’t want an additional follower?

Jonathan: Every level has a prisoner that you can rescue in order to unlock an upgrade for your character for this run. One upgrade option might be the companion upgrade that will make this prisoner fight on your side. You can give him a weapon and he will use it. The better the weapon you give him the stronger your companion will be.

Over time the companion will also level up and get additional health and skill, so while they might not be very strong at first, they can become quite powerful later on, especially since you don’t have to share your ammo with them. To give you even more options you can command your companions to attack or guard a position. This can be used to draw the enemy fire on them instead of yourself, because if a companion dies you can always revive and heal him, but when you die the game is lost.

There are some really neat segments that you can come across randomly, could you describe some of them and perhaps what your favorite is?I personally thought the ambushes were wild.

Jonathan: Ambushes are there to prevent players from just sprinting through the game and avoiding all combat. Because the player is free to move on to the next level whenever they feellike it, they could complete a level in mere seconds. This wouldn’t make much sense because you need better loot and your upgrade, but I want to give the player as many options as possible.

However, in order to not make just running right through be the best option I added ambushes that are more likely to occur if you move on too fast. Surviving these ambushes requires a lot of skill but is not impossible. You can also avoid ambushes completely if you make sure to clear out the previous level as well as possible. 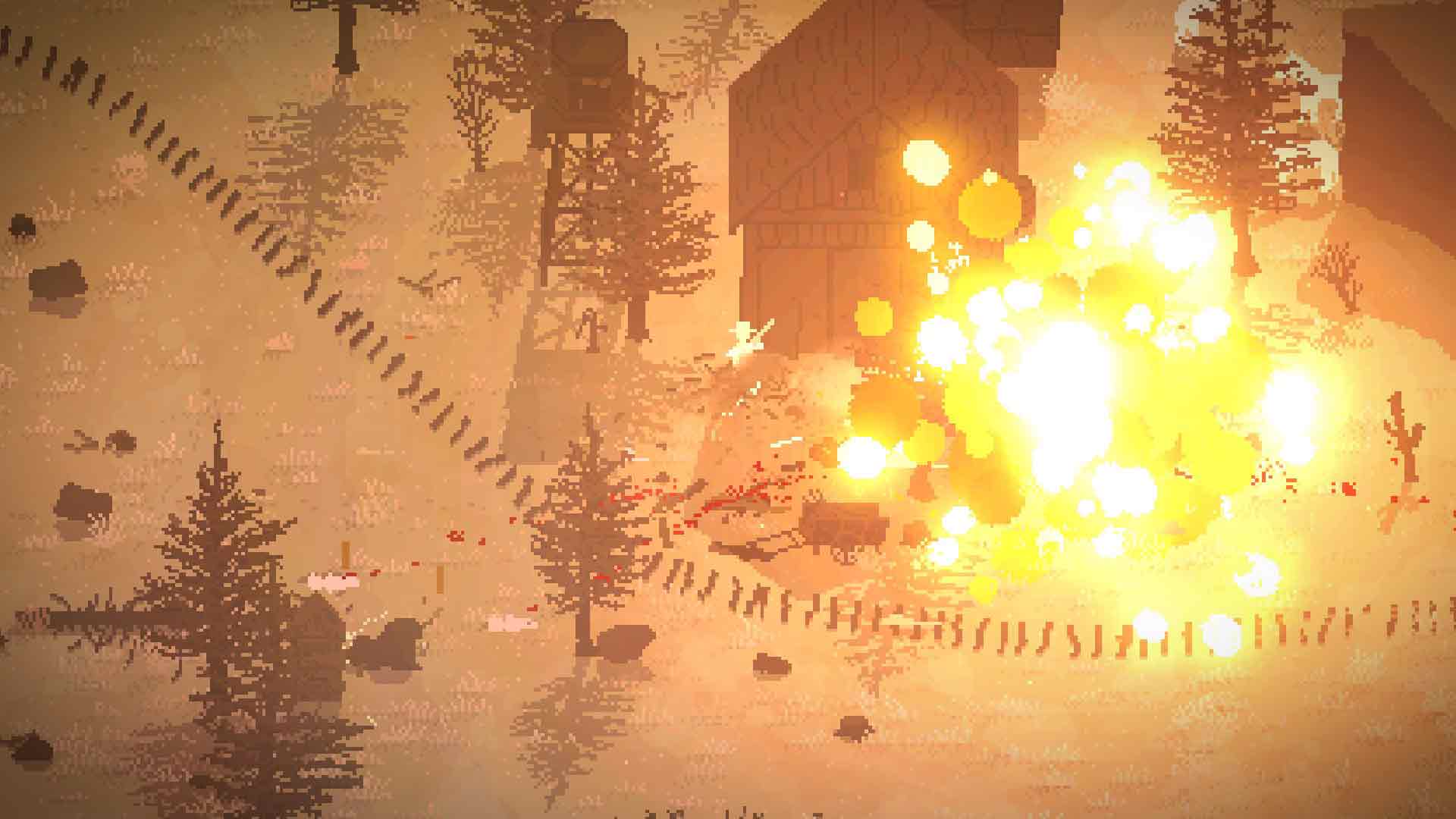 The horses, would you say they could be deadly during gameplay?

Jonathan: Yes, players always try to ride the horses or at least set them free. But the horses in this canyon don’t like you coming so close. I would avoid going anywhere near them.

What part of Colt Canyon do you feel most helps it stand out from the competition?

Jonathan: There are so many things that make Colt Canyon unique, I don’t even know where to start. The level structure and game loop alone are already so different to other roguelikes. The levels are not dungeons. They are not even rooms. They are large, open and organic areas that can be explored freely and are persistent. You can and will come back later. The mix between exploration, stealth and action is also rather unique and plays an important role in Colt Canyon.

Obviously, the setting is very unique for a roguelike on its own. I don’t know of any other wild west roguelike with such a relatively realistic approach to enemies, weapons, upgrades and items.