For call based interviews we try to present the conversation replies as close to verbatim as possible, for context.

A staple I do in all interviews in order to start things off is to ask that you elaborate a bit about your work, and this particular role for those not familiar with it?

Emily: I am Emily Woo Zeller and I am a voice over actor as well as a stage actor, dancer, singer. We're here because I recently played Panam in Cyberpunk 2077.

In Cyberpunk 2077, you provide the voice for Panam Palmer. Could you tell us a bit about the character and the situation she finds herself in?

Emily: Well I think that depends a little bit on gameplay. I can’t comment on that, but I can say that she is a very rough-edged loyal human who is part of the Aldecaldos and lives outside of Night City. She really loves her machinery and her people. So yeah, adventures may ensue.

With a game like Cyberpunk 2077 players have their choice of character customization, did the V (character) you’re potentially chatting with have any impact on how you were aiming to deliver lines?

Emily: Well, characterization as I understand, and I haven’t had a chance to play the game yet myself. As I understand that’s all aesthetic. Of course you have choices for how might respond to a situation. So when we were recording and when we were working out what scenes may happen Panam responds to each possible scenario. So in that sense, yes, but in terms of like what a player might make themselves look like, no. So only in terms of the actions that a character takes would that determine the path that you would take with Panam.


When preparing to voice Panam, were you given any initial direction in regards to the character? Just in terms of any examples of prep work to get into the mind set of this particular performance?

Emily: Yes and no. So, it wasn’t like I was given the whole script beforehand and then had even any time to prepare before you get to the studio. That is pretty typical in situations like this one because of confidentiality concerns, but then also it’s just because of the way the workflow happens. I think often for things like video games and animation. When I got into the room during the audition process I was given some information about who, and what kind of characteristics she has.

Then once we were in the room with the director, he was the one who provided information about what was happening and with whom. It was go time, so yeah, it’s a lot of very instinctual performance that is directed by said director so they helped shape what direction to take the performance in. I did not do any pre-work with any lines that were given to me beforehand, it was all in the studio that the work happened.

To somewhat build upon the previous question, were you aware what type of game this was going to be ahead of performing? That being the whole Cyberpunk type of universe, did having that knowledge of this different type of futuristic world impact how you thought of the dialogue you were providing?

Emily: I mean, I didn’t know really what I was auditioning for. It wasn’t until we had booked the job that I was given any information on what the game was, and then yeah I was familiar. I’m familiar with, not Cyberpunk 2077, but Cyberpunk in general as a genre and a concept.

What do you think of the genre of Cyberpunk?

Emily: In general, I mean it’s fascinating. It feels very closely adjacent to our world now. So it doesn’t feel like a really big stretch. It seems like a natural extension of where one might go if they were thinking about a potential future.

To keep an eye out for, and I mean this is obviously based on the role playing game from back in the 80’s I believe. So even before then, this concept has been around for a long time and we just keep inching closer and closer to that reality. So ever since, I don’t know how close we were back in the 80’s, but certainly now forty years later it feels like we’re quite close.

When performing the role, were there any particular lines or moments that really stuck out to you? Whether that’s a behind the scenes moment or from the dialogue.

Emily: You know we had been doing a lot of her really big scenes, or perhaps big is the wrong word, her very loud scenes. Where she’s just like right up in somebody’s face about something, and then we got to do a scene in the cabin or at the bar and all of a sudden we just got to go super intimate and that was really special.

I felt that was like, that felt unusual to me to get to do that range with her. That they let me do it and they encouraged me to do it. So that it wasn’t just her being big and bold and out there all the time. That you also just got to see her when she’s like, hey you know what, I’m done with the day I just want to kick back. 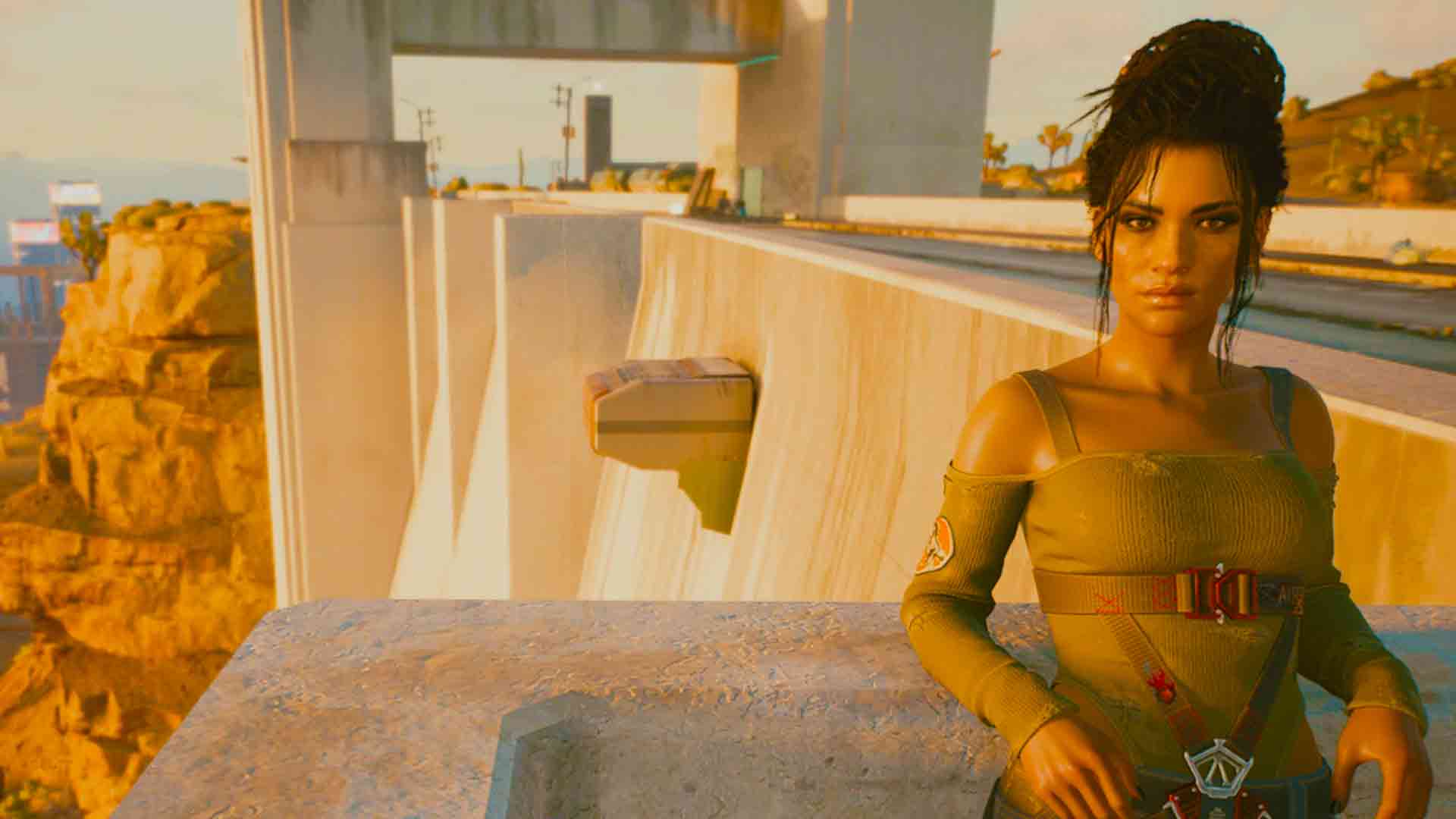 What’s it like to see your voice attached to a game character?

Emily: I mean, I love this job. I feel very proud to be a part of this obviously. This is the biggest game, certainly that I’ve been involved in. So it’s exciting.

With that, there’s been a lot of praise that I’ve seen for Panam. Were you surprised by the fan reaction?

Emily: I was just going in there to do the job and I loved her. I mean, the director and everybody loved her, like she’s obviously a really cool character. We’re like yeah, we get to do more and we would get in there and do it, and have a lot of fun. I definitely was not thinking about how it was going to be received in any kind of way, it was just work. I mean, that’s the way that I approach any job.

I don’t need to worry about how it’s going, the reaction that people are going to have necessarily. I mean, unless there’s like something seriously upsetting about the content. For the most part my job is to just deliver really well on the best of my ability. Whether that’s well or not, but to the best of my ability to whatever the task is or whatever the project is. Then let it go you know , and then it’s what people think of this is what people think of it.

Do you see yourself being interested in additional game related performances in the future?

Emily: I still have my agent, it’s been ongoing work. I’ve been in the voice over industry for fifteen years so yeah I don’t intend to leave anytime soon.

What are other voice over characters that readers might know you from?

Emily: So I started in Hong Kong and while I was living out there I dubbed for anime and some live action work. Then various voice over things such as commercials and government messages, things like that. The majority or our work out there was in anime dubbing. There were a number of shows, I mean we did a show every single week for an entire season. My Melody, Ginban Kaleidscope and Yakitate!! Those on the top of my head, I mean this was a long time ago now.

Yeah, but then I came to the States and I did some dubbing for Pokemon. I was in the movie XY. I played the princess character in that and then in the one season of the show I was Bryony. Then in 2009 I picked up audiobooks and started to do that full time in 2012. So the majority of my work has been in audiobooks. I’ve recorded about five hundred titles I think so far.

Yeah, so it’s been the bulk of my focus, but like I said I do have an agent for animation, voice, video games and commercial work. Yeah, I was recently in The Last of Us Part II. I was just a few random characters, no major character there but I was in that game. Yeah, and then many years ago there was a game called sync, it goes s-i-n-c, I never got too much information about it but I played a general in that game. Nice, yeah so those are what I think are sort of the major things that are the other voice work that I’ve done here. 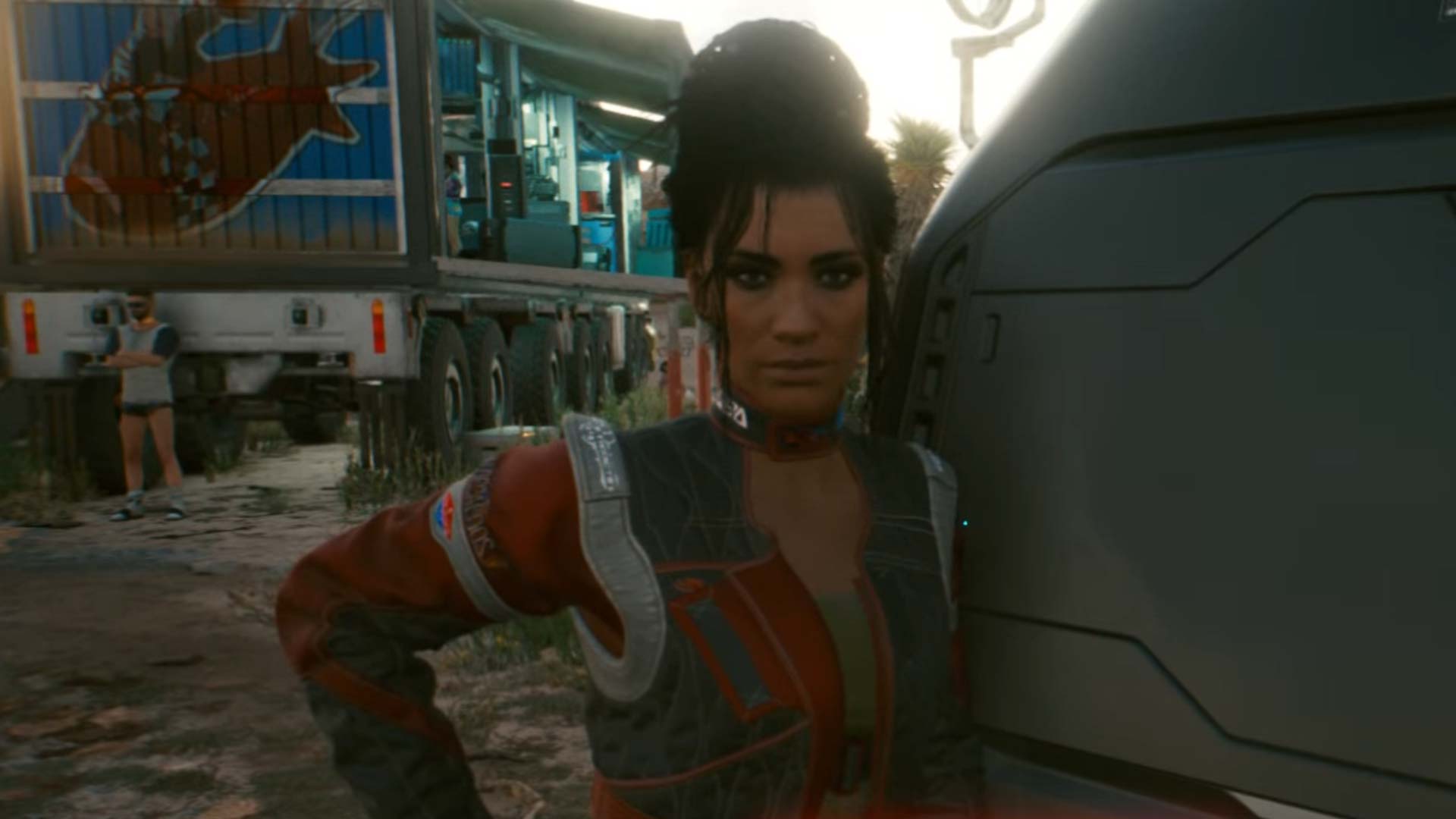 Would you be interested in reprising the role of Panam if she were to appear in some sort of future Cyberpunk 2077 expansion or other medium?

Emily: Oh yeah, I’d love to do her forever. She’s so cool, any chance I could if I were offered I would for sure.

Have you seen the character in action in any way such as gameplay wise?

Emily: Yeah, so I have seen, I mean obviously there’s a lot of video upon Youtube. There’s actually quite a bit so it was really cool to see the visual as I had no idea that she was going to be drawn or animated so beautifully. So when I saw for the first time I was like, what! Yeah, and so I’ve gotten to see several scenes that are fully fleshed out and people put up on Youtube. That’s been cool.

Emily: I recently produced a romance and erotica short story collection. I know (with fun expression), I have a co-producer. It’s me and Gabra Zackman, she and I actually did an AMA last week. The show is called, or the season is called “Nice & Naughty”. Go figure I know, the premise is really cool actually. So each episode, there’s five episodes in the whole season, each episode forty-five minutes long and the first half is a romance so it’s sort of light and fun to get to know the characters.

Then the second half is the erotica so it’s a morning romance to sweeten your coffee, and then an erotica to spice up your evening wine. So you can choose if you feel like one or the other is not really for you. You can just skip that chapter and move on to the next part. We’ve kept it really clean and separate, so that if you’re not comfortable with one or the other, there’s a way for you to do that and then in between there’s a very silly double entendre recipe that’s connected to the story as well.

So we find it a lot of fun, it’s based in, the story is based in Sunnyside, Queens. Which is where Gabra is based, and so it’s hugely diverse and just really fun. There’s just constant action and interaction and so yeah, that’s something that we did and that’s available where that you can get audio books. So the whole thing runs four and a half hours, it’s not a long commitment and you can also get individual episodes if you want to.