Jean-Marc: We had the opportunity to work on various genres in the past. In the early days of Madonna, we did a funny airport simulation called Airline Tycoon and had some great times developing isometric tactical games such as Desperados and Robin Hood. Then we mixed in even more genres with some open world experiences: Arcania, a fantasy RPG and Fade to Silence, a harsh survival in a corrupted world, frozen in an eternal winter.

This was our latest game before we worked on Destroy All Humans! Before that we also did some cool side-scrollers with Giana Sisters - Twisted Dreams (a revival of the C64 era classic, with a twist) and Rogue Stormers, a rogue-lite Run ’n Gun in a diesel-punk fantasy world with hordes of crazy orcs and goblins to blast away. So, in fact, besides some few aspects of our previous games, nothing predestined us to the pleasure of reviving Crypto!

With Destroy All Humans! being a remake, I was curious about the process of getting this production rolling. What sort of sparked this effort to remake the game and what strides were taken in regards to bringing that original experience to the modern era?

Jean-Marc: At the end of the day it was always a careful deliberation on what to keep, where to include improvements from the sequels, and what to create from scratch. Our goal was not a 1:1 remake of the original, but to capture memories players have of the game.

Since games have evolved a lot in the last 15 years, our initial approach was fundamental research. Every team member played the games in this series to a certain degree and were asked the same questions: What was good? What should be improved? Which features are a no-go for modern games?

Each team also approached its playthrough with a different focus. Game Designers focused on the mechanics of the original, and how they compared to the sequels. Level and Mission Designers looked closely on the world design and mission beats. Then the teams incorporated their findings into the remake. Where we saw that Pandemic improved certain features in the later games, we decided to keep them. We also looked at which features would make sense to add to the remake which originally were added in the sequel. Where we found outdated components, we looked at player expectations in modern games and adjusted accordingly. Most obviously some quality-of-life features like save-points and the focus-mode, or a more reactive environment.

Our Mission designers examined each mission and started to rework the level beats to improve the general flow of the game. Another team focused on Crypto’s movement. Another one on boss fights. The overall goal of each team was to make the combat, with all of Crypto’s abilities, as dynamic as possible and enable players to use weapons and abilities at the same time.

One prime example would be the S.K.A.T.E. feature. Originally it was a jetpack bug where Crypto just slid over the ground without gaining any altitude. But seeing the opportunity it presented, the team fell in love with the feature and decided to improve and polish it. The result is one of the most favored features in the game. 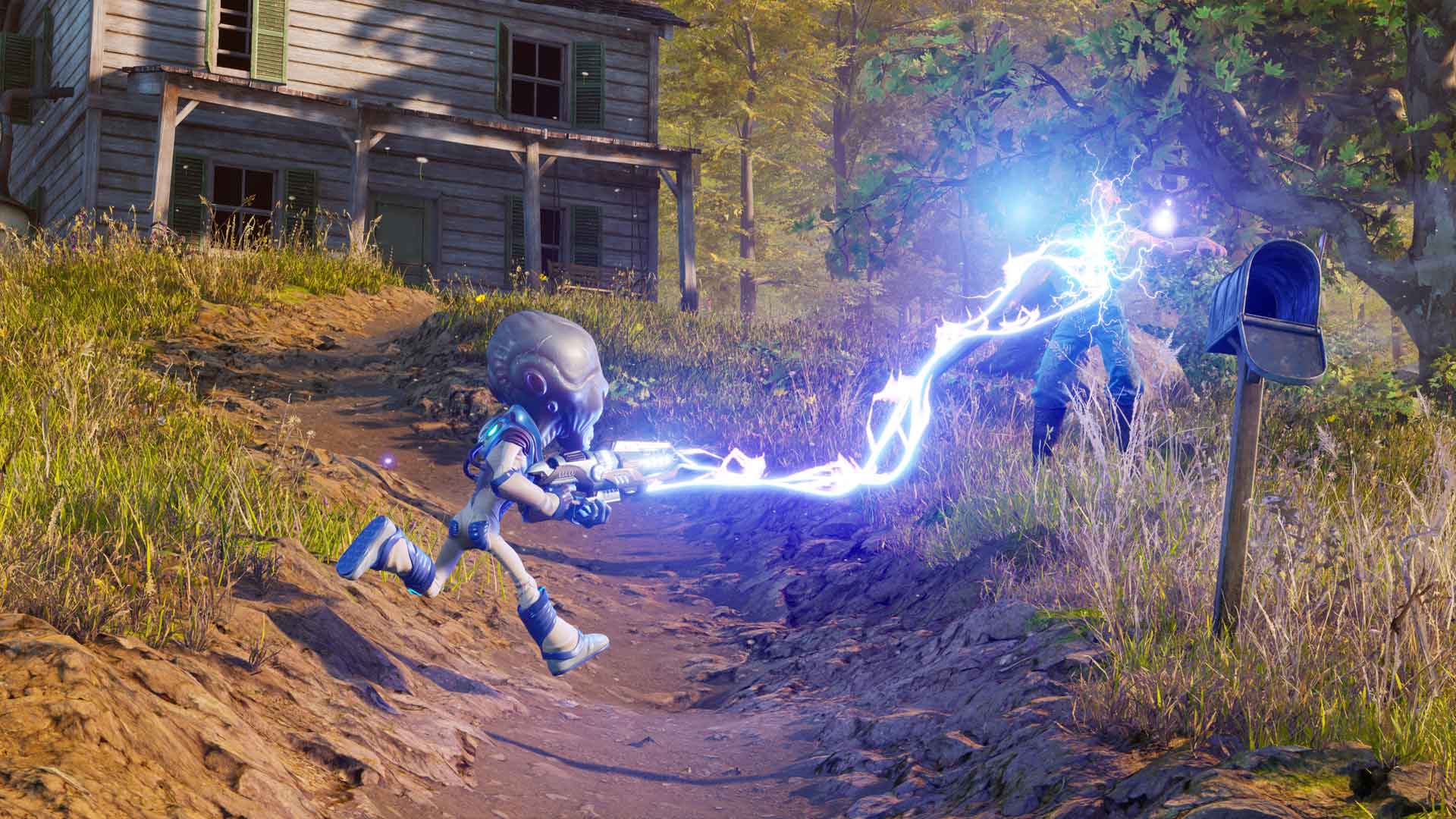 From my E3 2019 meeting there was a discussed interest in more Destroy All Humans! remakes, or even original sequels. Since the project is now complete, is that still of interest to the team? To possibly remake an additional entry, or is there a preference to do perhaps something new in the series instead? I do understand this could possibly not be talked about, but if you had a personal preference for either which route would you like to see taken?

The meeting also went over getting the original voice cast back, what was that like and did they have any trouble in preparing for another round as the iconic characters?

Jean-Marc: It was never really a question whether to keep the original recordings or not. They are such an integral part of the Destroy All Humans! experience that it would have been a shame to alter them. There were some instances, however, that required new voice lines – the tutorial for example. For that we had one recording session with J. Grant Albrecht and Richard Steven Horwitz. I was not there personally, but looking at the outcome, I think they picked up their roles right where they left off and did great. :)

When going to remake this type of game, what was it like balancing that original classic style and also trying to enhance that for the designs of today?

Jean-Marc: In general, pulp novel covers, 50’s art and artists, movie posters, and advertisements helped us get into that particular era’s mood on the visual side. Modern CGI-animated movies, especially comedies, helped us a lot to tailor the overall look and feel of the environments as they are just as important a part of the game’s “scenery” as the characters. For the humans to destroy, the idea was to portray them as silly, practically make them as pathetic as Crypto 137 saw them. The voice-acting in the original game is iconic, and we wanted to pair it with a good amount of caricature-stereotyping with exaggeration on animations.

The art team then replaced, piece by piece, the original assets with the ones we produced, and spiced everything up with additional assets. During this process, we used the original data as a reference for the proportions of buildings, making sure concept artists’ work for new assets still matched the layouts of the original game. 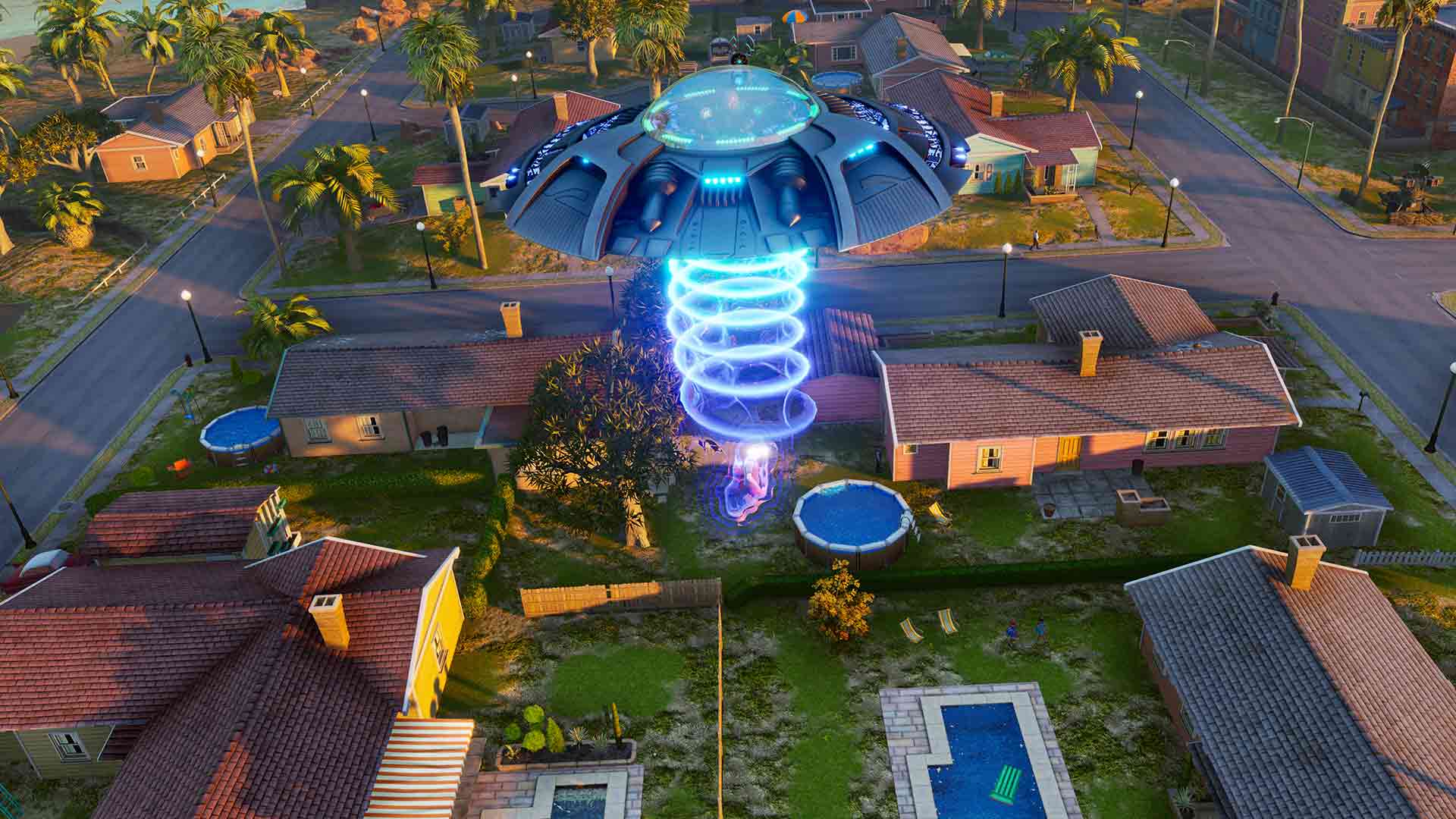 I really liked how the abilities were handled, much easier to unleash upon those pesky humans. Were there any key goals in regards to updating mechanics and enhancing that for players of today?

Jean-Marc: We altered gameplay whenever we had the impression that the original implementation was either too clunky, outdated, or did not match the ‘nostalgia goggles’ version of the feature. Even then, we checked whether Destroy All Humans! 2 had already fixed the issue to stay as close to the original as possible. For example, we added the ability to sink and rise with the Saucer and the hypno-blast power “Defend” (which causes an armed human to become your ally).

Both were part of the original Destroy All Humans! 2, but not the first game. An example for our own design choices is the new Psychokinesis-system that can be used freely while flying with your jetpack, shooting your guns, or popping a human’s brain. In the original, you were locked into the ability, which limited freedom in combat and made the game less dynamic.

I understand that some cut content was worked on for this entry. What was it like to take a look at things from so many years ago, and then fully realize that vision of missed out on content from the past?

Jean-Marc: When we went through the source material, we found unused audio from a shelved mission as well as some designs. This inspired us to restore a mission in Area 42 that wasn’t in the original game, as it also fills in a gap in the story players probably didn’t notice back when playing the original.

And, in a way, it was our homage to the original development team. We know the myriad of circumstances in game development resulting in something getting “cut”, so we took this opportunity to “uncut” that, and we hope the result is close to their original thoughts.

For those that have perhaps not played this series before. What’s something within the game that you personally find really fun, or wacky that you feel others might get a kick out of?

Jean-Marc: The lightweight humor of the game offers a very welcoming break from the harsh realities of #2020. Pandemic did such a great job making fun of the space invader tropes, the red scare, and MacCarthyism of the 50s and turning the tables so you play the grumpy alien invader! We had a lot of fun working on this remake and we spent a lot of efforts to enhance its entertaining nature. Every decision we took was always bound to the same principle: no matter what, make it fun! 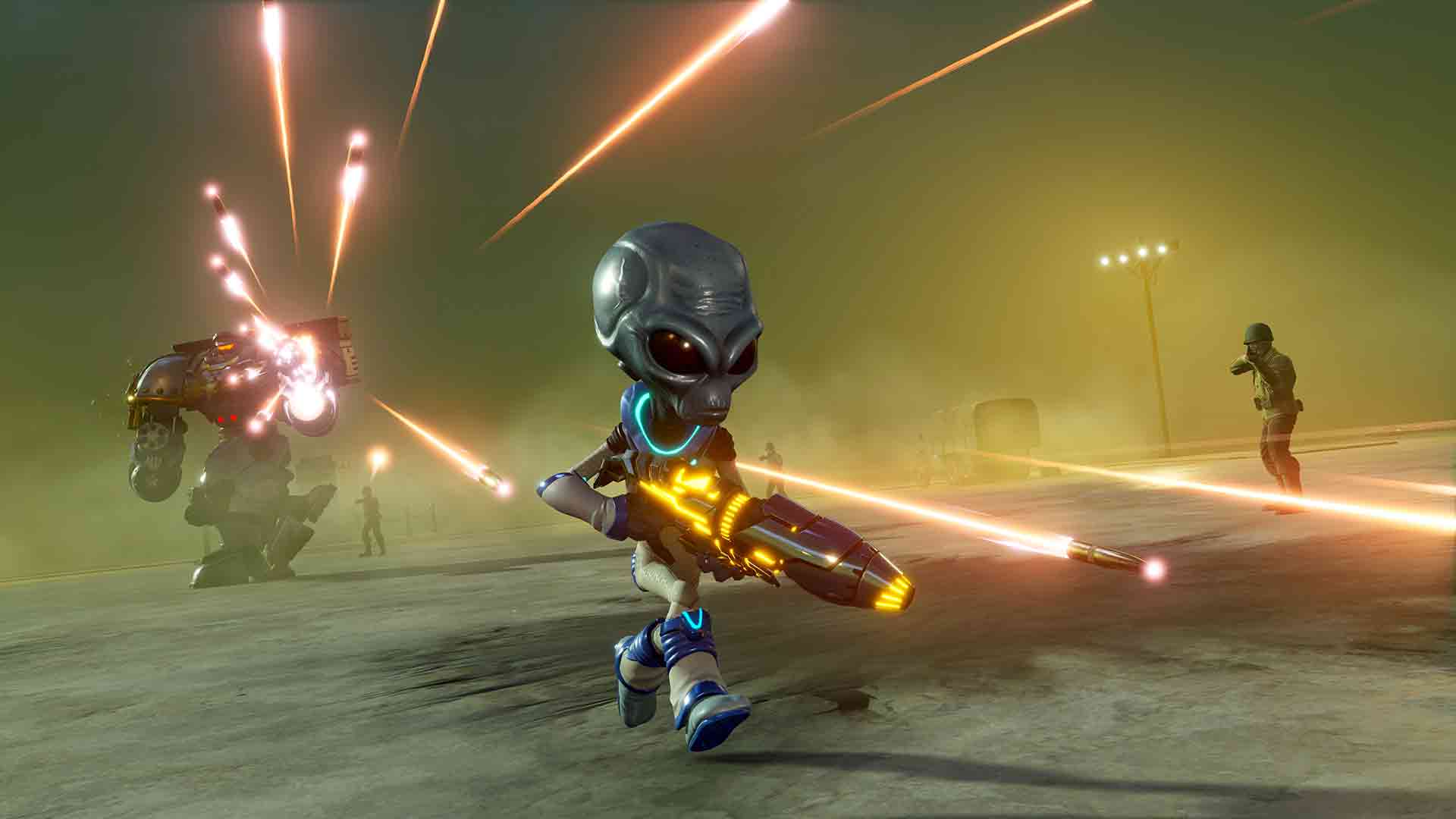 Are there any plans to upgrade the game for Xbox Series X or Playstation 5 consoles?

Jean-Marc: Currently we are working on post-release game maintenance. A next-gen port of Destroy All Humans! is not planned.

For a more fun question, do you prefer running about on foot vaporizing folks or are you more of a flying saucer blasting the ground from above sort of Crypto?

Jean-Marc: Both are fun! While the saucer portrays the invasion fantasy the most, I really dig the ground combat, particularly since we managed to combine so many actions you can now perform in parallel. It’s such a blast to zap a cop while extracting a soldier’s brain and grabbing an agent with PK all at the same time while gliding through the air with the Jet-Pack and dodging a bullet with a quick dash! The Furons’ superiority over earth monkeys is pretty unquestionable (rosy cheeks smiley emoticon).

Jean-Marc: We’re really amazed to see so many players enjoying our remake. This is such a great acknowledgement of our passion and efforts. I would like to use this opportunity to thank all the players who spread so much love about our take on Pandemic’s game.