I certainly didn’t expect to see a RTX update for Fortnite, but alas here we are. This particular upgrade to the game brings some subtle, yet interesting visual tweaks. It also packs in NVIDIA DLSS and I’m going to be going over the performance you’ll see across a range of options.

For context, my setup is a RTX 2080Ti with an i9 9900k. I had everything set to a 4k resolution with all settings on. A sort of push for what this game provides. Without RTX on it was essentially a locked 60FPS with split second dips at times with it snapping right back up to that set FPS line.

The initial test was running with ray tracing on, that presented about 15-20FPS which is basically unplayable in my opinion. Adding DLSS performance I was able to get around 40FPS. With the balanced mode I was hitting 30FPS and with quality it was about 25FPS. I did go further testing wise, but couldn’t go as in-depth as I wanted.


That’s in regards to trying lower resolutions as I was faced with some crashing when aiming to add recording or getting it running for whatever reason. I did get 1440p running and that provided about a 10FPS improvement across the board.

I think if you were to go lower resolution wise it’s possible you could get this running at a 60FPS. Or playing around with some of the settings to lower them and their demand. There are some RTX selections to make that could impact performance. The point of my tests were to really push things and see what you can get out of it.

In my opinion the game is probably best played without this one if you’re playing it competitively. It’s really quite neat from a visual perspective however and I’ll be diving into those specific details shortly. Keep in mind that in the future this will become more of a standard feature, and it takes efforts like this to get the technology adapted. 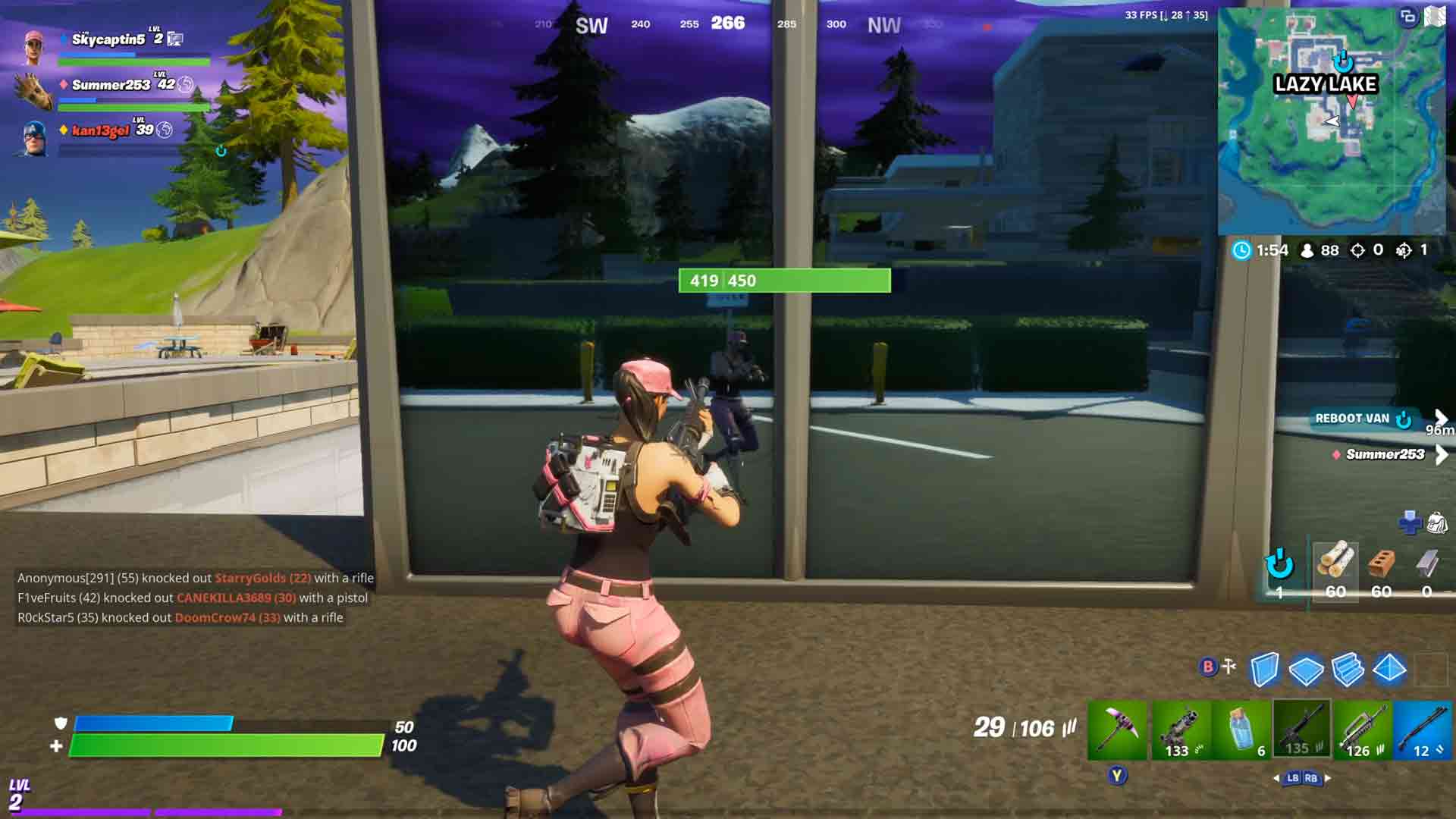 This is a good continued step towards better running. I would even imagine the new GeForce RTX 30 series could handle this perhaps fine with the DLSS assist. So what you’re getting here in terms of upgrades are reflections and shadows. With reflections you get to see windows come alive and become helpful.

They’re perfect mirrors of the world, and you could watch them to see others behind you whereas in the regular game they’re essentially useless. There’s even particle smoke from weapons, it’s an exact replica. There are also tiles that reflect, smaller items do as well when on metallic shelves. Another reflective point is in pools of water or the rivers.

It’s an enchanting effect, and adds a level of realism. A strange thought for a cartoon type game, but every little bit makes a difference. I actually imagine most players were wondering what I was doing looking at mundane objects or windows while playing. I didn’t notice much of a quality dip reflections wise across the DLSS options so that’s good.

Next up were the shadows, perfectly cast and long ranging. Every little object has shadows, and that changes based on the time of day. I should mention at this point that night does impact performance a tad further, though only by a couple FPS here or there.

It’s quite intense seeing those details throughout the environment. All of those real shadows from players, houses or even each little objects out there. Next up is the ray traced ambient occlusion. This makes smaller details pop with a little extra bit of vibrancy. It’s not too noticeable, but something that stands out if you’re looking for it. Finally, there’s the ray traced global illumination.

This takes the world a tad further lighting wise, adding what I felt was a soft baked lighting to the overall experience. Here its additional bounced light that otherwise wouldn’t be present within the environments. With that, be sure to read our preview of another game with the RTX upgrade or the title’s franchise hub for additional coverage of what this ever expanding free to play battle royale has to offer.