Going back to just Screamfest 2020, and dropping the HEX (Halloween and Entertainment Expo) portion of the title the well known Calgary event continues onwards. It runs from October 22-25 and then October 29-31 at Stampede Park around The Big Four building.

It’s good to get a variety of day options, and it was somewhat what I had hoped for from the concept last year. I basically had the idea of splitting the HEX on one weekend with Screamfest and then doing the latter event multiple times in the month. Whatever the case, things are definitely different this year due to COVID and they’ve certainly adjusted in an appropriate way.

I was actually fairly impressed by their efforts to make it safe, and keep it clean This included sanitizing for each game, and every house entrance with periodic house cleanings. On top of that, direct requirements of wearing a mask indoors and outdoors which was enforced.


For context, I just got back from the initial night of the show to compile this review of the event. It was a rather chilly evening, so it wasn’t too busy at the show yet there was still a solid quantity of individuals taking in the sights. All things considered, it was decently trafficked.

So you start by going outside to handle tickets, be sure to bundle up if it’s a chilly day since the houses are also outside this year. After grabbing your tickets you’ll head inside to The Nightmare Market. This is a specific area taking up half of The Big Four building. It has the fancy lights on the ceiling and a few split rows for various vendors. They seemed to have a variety of options present there if you want to get some Halloween type items.

It wasn’t quite as expansive as last year, which makes sense. At the far back wall you’ll see a variety of games being present. These are carnival games and it includes the following; “Feed the Demon”, “Pharaoh”, “Wheel of Misfortune”, “Witch’s Brew”, “Gary”, “Lose an Eye” and “Zomo”. You use the special “Killer Cash” on each of these which is something you can purchase or it may be included within your pass.

Speaking of passes, there are a number of options present and even a lower entry point if you just want into the market area. A good variety for sure. Inside the market you’ll also find an axe throwing area which is well setup and a lounge type spot where some adult beverages are present. That about sums up the core section, it’s certainly more compressed yet at the same time impressive considering how things are going this year. 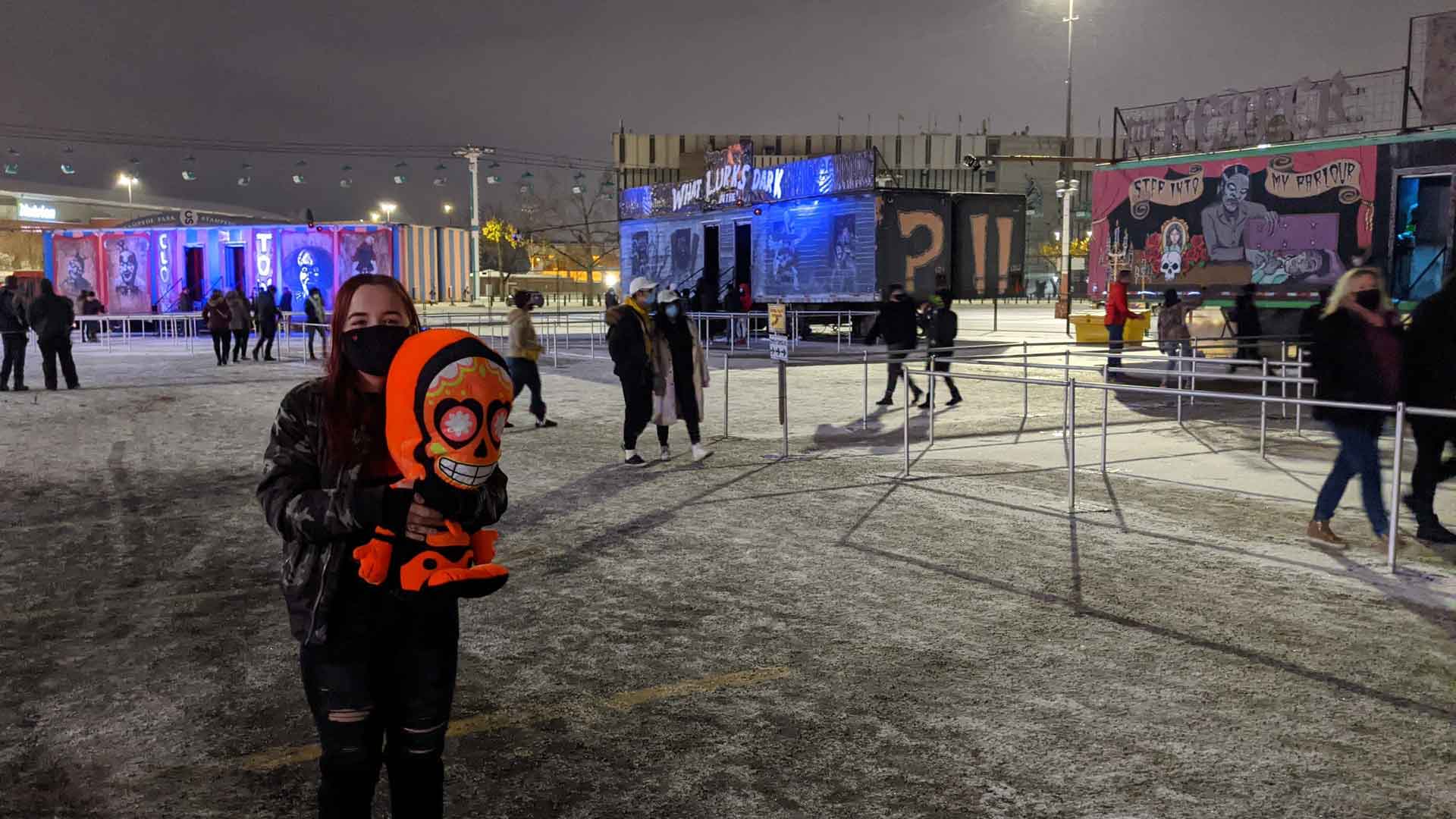 When you’re heading to the houses you go down a one way back area. This leads you to an open spot that has the six hours, and a mini donuts spot too. I should mention food trucks are present, there was one while we were there and the food was good. The spooky houses are of course quite a part of this attraction, there are six this year and they are recommended for ages twelve plus. As mentioned prior you sanitize your hands prior to hopping into any of them.

The following houses were present this year; “Clown Town”, “Reapers and Grimm”, “Bates Motel”, “What Lurks in the Dark”, “Walking With the Dead” and “What Lies Beneath”. There are live actors in each of them, this aspect seems to be handled well this year. It didn’t quite seem like the actors were as intense this year when going through them, but that could have been due to the cold at the time. I actually found the interiors of the houses to be warmer though, in comparison to the line-up area.

Still, a good selection of houses that should hopefully provide a variety of terror when you head through them. I think overall they did a really good job with the setup of the show this year, considering the restrictions that are present. It’s the same spirit of the previous year’s show, just in a smaller form factor. They don’t cut down on the essentials, which is important to keep the feeling alive. I did miss the premium intense house and the locked room stuff would have been cool to see again.

At the same time, I’m entirely realistic in that those wouldn’t have worked this year. It’s actually impressive this even happened as I wasn’t sure if this would be a plausible sort of thing. It’s great that it did, and I look forward to perhaps an even larger scale effort the next year if things are more back to normal. This is definitely a fine effort for the current times, and I think it delivers what you would expect from the event. Oh, and it’s $15 for parking which is a bit wild though I believe that’s a Stampede aspect. You can check out our Calgary hub for more coverage from within the city.