This legitimately is the definitive guide to the Assassin’s Creed games, it’s wondrous honestly in regards to the details it provides. It dives deep into the lore of the franchise while detailing the entire timeline from outside of the titles to the most previous entry of Odyssey. Note that it does not include direct details on Ragnarok as it does with every single other iteration of the series. It’s seriously impressive.

You get everything from details about all of the events leading throughout the games, to full detailed splash pages about the assassins and even smaller dives into the side characters you meet along the way. If you want to catch up on what’s happened thus far in a descriptive light reading sort of way, this nails it.

I had expected more of a focus on the art, and while it does that a little it’s very much heavy on the reading elements. You learn everything you need to know, and then some. I was a tad overwhelmed by how much lore this series actually has. This book covers it all, from the main game entries to the more niche releases.

If you’re a fan of the series you might find this delightful, if you’ve always been curious of have wanted to catch up then this is the way to do so. It’s concise, gets the points across and even dabbles in some of the smaller aspects of the series. You get everything developed from the locations, to the technology and even the modern style assassins. It’s got it all. 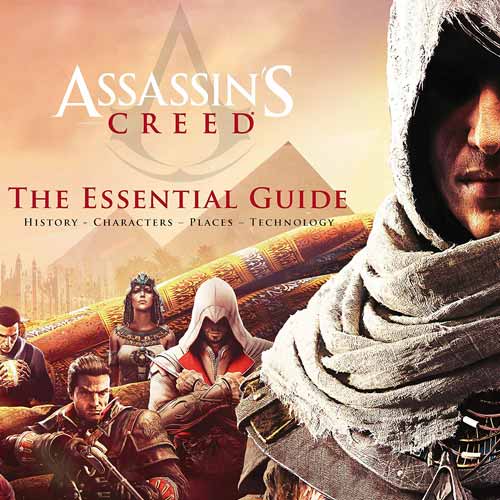 This is a hard book offering with a quality layering on the outside. It features thick pages and many of them at that. It really dives in deep with layouts that serve the writing. Expect minimal, yet gorgeous illustrations that showcase what you’re reading up on. It’s done in an almost textbook like way. It’s very educational in that regard, you’ll learn a lot about the series and each of the characters that inhabits the universe.

It has the right balance of timelines to progression of where various characters fit into things. It’s very well done from a presentation stand point, I think they nailed the look and style here. They make sure that the important characters get their own showcase, while doing so as well for some obscure ones from smaller games. On top of that, secondary characters are present and even a small little thanks to the community for when you make it through.

Assassin's Creed: The Essential Guide truly is a definitive look at this series from every angle. It’s the perfect companion for those that are trying to understand the lore and the universe. It might be information you know if you’re a hardcore fan. Despite that, it could be good for reference in case you want to be refreshed on any areas of the titles.

It gives you a full scope look at the locations, characters and timeline that make up this sprawling franchise. It’s impressive that the series has continued to thrive and I imagine it will continue to do so down the road. It’s got quite a lot of lore, and I learned a fair bit from this one as I guess I had some gaps in knowledge. They’ve presented it well here, its easy reading and satisfying too.

You’ll likely pick up on something new, and be delighted by the extra details you’ll learn about this series. It’s shockingly well done. I imagine of value to newcomers, and even the experienced wanting to have this as a sort of collector’s memento of the ventures they’ve had in a beautiful written form. It’s just so well done from the cover to each page throughout.