I would have never thought the charming duo of Cuphead and Mugman would reach so many mediums, but alas here’s a comic based on the characters. This is a collection of short stories, a few pages each or even less if it were a gag. It’s definitely on brand with the franchise you might be familiar with, while adding some extra life to them.

It’s nice to see the characters get this layer of added depth. It’s something you could read if you’re unfamiliar with the series, or a hardcore fan. It’s got some quick, quirky ventures and so many well known characters from the game. You don’t have to know them to appreciate their appearances, as you’ll learn who they are through these adventures. It’s got the themes, style and presentation of the era the game aimed to emulate.

It has fun stories that feel on pace with those times, but nothing too wildly long or intense. It’s mostly just fast hits that swiftly show a location, setup some sort of adventure and then end. I suppose there’s not much more needed than that since it presents the style of old, at the same time longer stories were something I had anticipated seeing within this package. 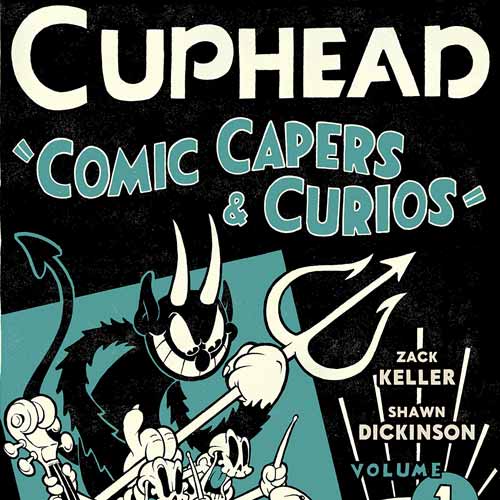 This is a very small book, and a soft copy. It presents gorgeous artwork that aims to bring to life a 1930’s aesthetic. It’s quite on par with doing so, and it matches the existing visual style that you might be familiar with if you come from the games.

It even attempts to deliver the tunes, and themes that are present from the regular package. It’s such a delight to see it transfer over so well, showing just how versatile this world and its characters can be within a modern era. The artwork really is stunning here, with each scene brimming with life or characters and their antics.

Cuphead Volume 1: Comic Capers and Curios is a decently solid collection of stories that features some gorgeous artwork. It brings the duo to a new medium, and that works for them. I would have liked some more extended tales, but I think this is a nice way to bring the world to life in a different style.

You get to see that extended charm and mischief between the two while having it presented in less of a hardcore boss battling way. It’s a fine read, just not a very long one. It very much brings back those older comic stylings where it’s just a pile of short stories. Don’t expect anything to really tie together either, it’s just standalone ventures.