Dark Souls: The Age of Fire is a limited series comic run that acts as a prequel to the original game entry in the franchise. This series is all about death, desolation and rather hardcore situations. I thought they generally captured the theme of melancholy that the games are known for quite well in this.

It’s dark, filled with ash and rather gloomy. I will note that if you’re looking to read this, they have a character index at the back. That would have been extremely helpful at the front, as this may not be easily accessible for those not familiar with the lore. It’s fairly straight forward, yet at the same time I wasn’t quite sure what was going on. It was action packed, with long stretches of dialogue heavy segments to setup the areas.

They travelled to many unique locations, saw some rather insane looking monsters and by the end I was definitely seeing something I remembered. Generally just be prepared for some rather insane moments, darkness and chilling times. 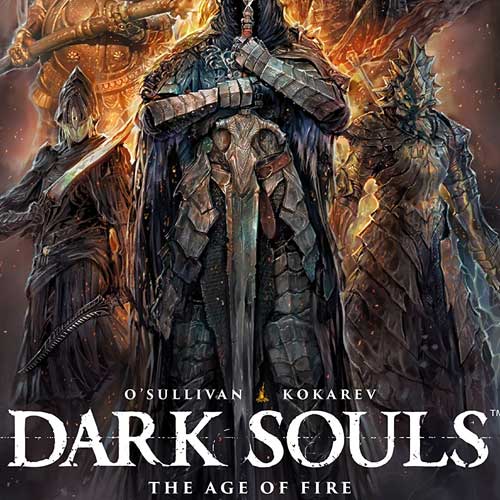 This is a very dark, soft cover comic book. It features some very distinct panel setups, I’ve never quite seen them designed like this before and that was interesting. Helped with the motion of battle, and some of the fast paced direction. They’re also so striking, and that added to the overall theme that was present.

While there was a sense of a cartoon, and or minimalistic art design. I thought the visuals in this were just great, really helped set the mood and feel aesthetically similar to the games. This is a fairly thick comic offering, and it did feel as though it set the stage for the first game quite well, at least in some areas.

The Dark Souls: The Age of Fire limited series comic is definitely an essential piece of lore for fans, but not necessarily accessible for all. I thought this was rather interesting, but I was somewhat lost at times being a more casual adventurer in these hardcore game worlds. You don’t have to have played the games to understand things, but it would have been helpful to see the character reference cards at the start instead of the end.

I will note that the back of the book does have some extra cover concept artwork which was neat to see, I always appreciate bonuses like that. This is certainly striking, with lots of lore based content. I just generally wish it was more accessible for a general viewing audience, as this world is wildly crazy. They definitely delivered on that darkness though, it was rather insane.