This is a special comic bundle that gives almost a taste test of the various ghostbusting teams that have existed over the years. This is of course to celebrate the 35th anniversary of Ghostbusters which is most definitely a classic selection of two well loved movies.

This package provides a selection of new standalone adventures that each feel as though they have a nice conclusive setup as not to impede on any other ongoing adventures. First up are the original Ghostbusters, then there’s The Real Ghostbusters. Following that is the Answer the Call team and finally the Extreme Ghostbusters. So definitely a little bit of everything, and I liked this look at the teams.

They’re all somewhat different, despite two of the squads being the same. If you’re a fan of any of these squads it’s a neat celebration piece with neat separate tales. It’s a solid collection of stories, and again just a bit of a taste for each of them as it might get you interested in any of their individual runs. 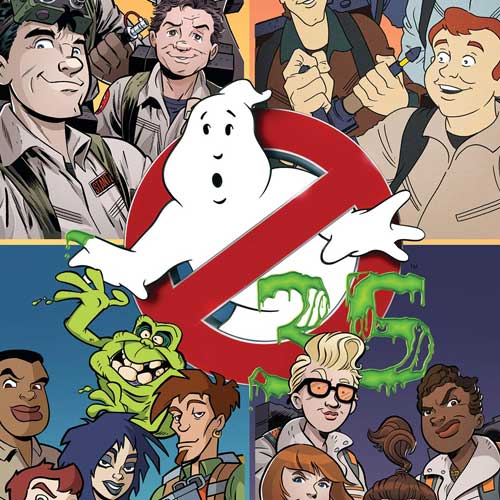 I thought the art style here was great between the various groups. They’re all of course different, but I appreciated each of the distinct looks and the detail within them. It didn’t seem like any was plainer than another as they each represented their respective franchises.

It’s always great to see more from the original group, but I also was rather fascinated by their replacement team as I recall them from the past but never really dived into what sort of adventures they went on. It was definitely a different sort of group, and almost felt like they were part of a different era in busting those ghosts. This book has a nice quality to the pages, and it’s fairly thick for length.

Ghostbusters 35th Anniversary Collection is a solid collection of standalone stories to get a taste of each ghost busting team that has helped build on the legacy of the movies. Again, just a nice small set of stories to perhaps build your interest in a squad that you might not be that aware of.

It’s quite a good idea, and gives just enough context for a fun little adventure. Everything of course revolves around the catching of the ghosts, but you get what I mean.