Glow vs the Star Primas Review

This comic is based on the Netflix Original series Glow. That is the Gorgeous Ladies of Wrestling, a show based on the production of this group for TV. The comic seems to take place during the initial seasons and follows the girls as they deal with a special wrestling convention. Here they face a more serious group of wrestles, and there’s of course a clash of interest.

The Glow squad is more about the acting side of things whereas the other group is far more serious about the competition. It’s got drama, different characters doing their own thing and it’s actually rather charming. I was surprised by how much I enjoyed this, and how well they captured each of the various characters. They also go the extra mile to make sure you know who the characters are in case you haven’t seen the show.

On top of that, this also seems more family friendly in comparison to the actual show which is adult in nature to a degree. Anyways, it got the personalities right while expanding the scope of the series and introduces new interesting characters along the way. 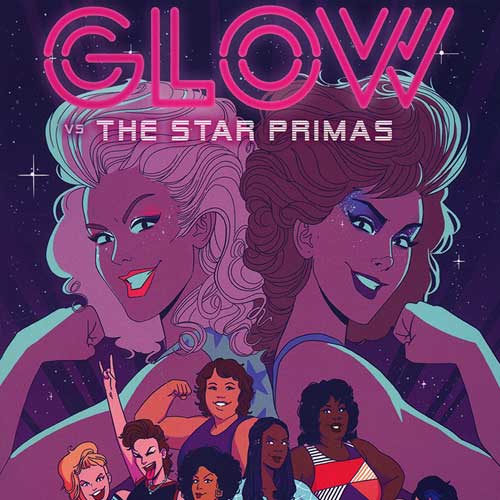 I really enjoyed the art style that was used in this comic. It looks great, sort of bubbly fun that matches the more eccentric element of the regular series. I think it works well, and they do a great job with it here to provide a lot of detail in each scene. There’s a good quantity of pages here, and some nice extras.

These additions include things such as special art, or full displays for the wrestlers so you know who everyone is when they come up. There are even nice extra bios towards the end. Definitely went beyond expectations in regards to help filling out the understanding and content in this one. It’s got a good quality feeling to it, and it feels like a completely standalone story for these characters.

Glow vs the Star Primas is a great addition to the Netflix Original series, providing an easier entrance point while having the regular fun of the series. It captures the group and their style very well, while adding interesting new characters into the mix.

It makes sure you know who everyone is, while being something that the younger audience could enjoy as the regular show is somewhat adult in nature. This was well designed, with great artwork and a well done standalone story. I certainly enjoyed it, and it definitely surprised me as I hadn’t anticipated how great it would be.