This God of War comic collection acts as a prequel to the soft rebooted Playstation exclusive franchise. The game was certainly remarkable, and this is a nice look into the changed Kratos. In this entry, the lead character is attempting to handle his anger. He doesn’t want to be controlled by it, but is continuously forced to embrace it as outside forces threaten his peace.

He’s joined in a minimal amount of the book by his boy, Atreus. The two are just living life, but some of the local population have an issue with that after discovering Kratos during his routine seldom walk. The guy is just trying to get a grasp on his anger, but has to unleash when the situation gets bad.

This is definitely a standalone tale, but it does help provide some additional context into what the characters had to deal with prior to the game’s start. It’s a more regular life, they collect resources and just live. This does of course have some stylized blood, and some intense moments of conflict. He is the god of war after all. 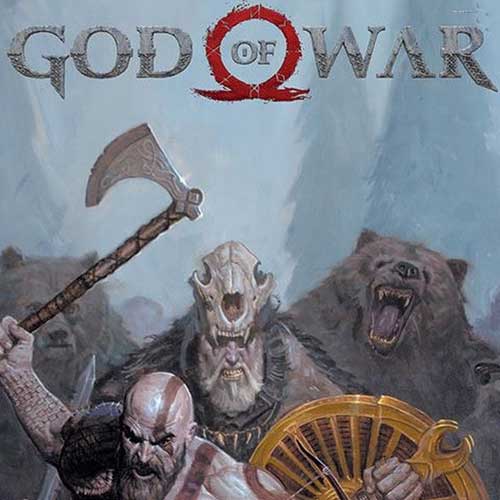 This was a soft cover comic collection of a number of issues. It featured distinct artwork that felt as though it was inspired by the game, but not directly reminiscent of it. It worked fine for this, just gave off a different vibe which is fine. There’s a good sense of movement, and conflict in how panels were lined up for the moments of combat.

This book is a bit lighter on straight up dialogue, Kratos is a man of action with less thoughts than most. It definitely has some level of gore, in terms of a really stylized blood style. I wouldn’t say it’s too graphic however, makes it more accessible. There were some neat enemies featured, I liked their aesthetic and how they fit into the overall universe.

The God of War comic is a solid prequel to the soft rebooted game, delivering a different look at Kratos. This is a man that wants to mellow out, and you see the end results within the game. It’s a nice intimate tale that gives more of a sense of the regular life the character had been living. It also provides context into how the boy is, and the struggles of being within a rather hostile landscape.

There was a fair bit of action, it’s lengthy and detailed. It has a really unique look to it, I liked the artwork. Sort of a simple and straight forward tale, but one that does help build out the old man further.