This is the third entry in the comic series that follows the events that were at the end of Life is Strange. That is, the first game in the series and perhaps the most memorable one still. This follows Max Caulfield as she deals with an almost alternate set of histories by changing time.

Chloe is included, and we also have Rachel which creates a rather unique situation. If you’ve played the games you know this is a strange twist on the timeline and it’s neat to see it play out. This is probably the closest we’re going to get to a continuation for these characters, and it’s been generally great thus far.

This latest part of the series finds Max trying to figure out the best way back into what she considers her correct timeline. It feels like more of a gap episode as it aims to teach us additional details about the powers at play, and just what could happen going forward. There are some interesting behind the scenes teases that seem to be moving along within the narrative and of course a deeper dive into just how wild things might get with the continued abuse of the timelines. It also appears to be setting up the events that will conclude this collection of comics, should be interesting to see what happens. 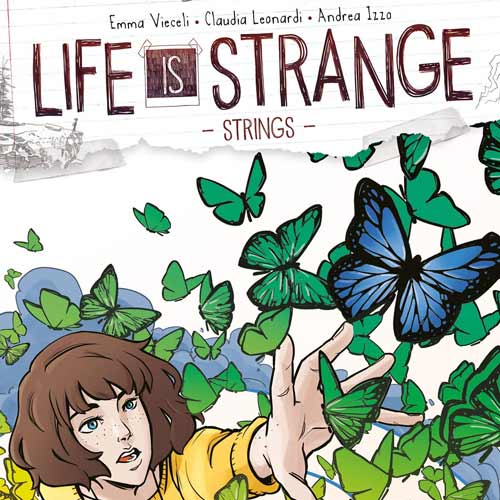 The new side to Max’s powers make sense, and are very interesting. I’m continuing to look forward to future entries in this as it’s noted as an on-going series. The artwork in this comic is once again gorgeous, and it matches the overall tones of the franchise perfectly. At the end of this book you also get some bonus covers, and other special extras to take in.

The Life Is Strange: Strings comic is a solid continuation of prior events, while at the same time not nearly as enticing. It’s not by any means bad, but this one really did feel like a gap episode. Just a bridge towards what’s going to happen next without much going on here. It does give us more context into how Max’s powers work, and where things are going to head. It’s interesting that they’re going to play with the timelines more, and that we now have an idea of how this connection actually functions.

The elements of loss and gain by either side when these splits occur. It’s definitely intriguing in that regard and it teases some possibly exciting events yet to happen. There’s certainly more life left in this series and I hope the last couple entries are more interesting to some extent. I just want something more profound or wild to come from this series, as these characters definitely do matter to me.