This is a shorter story that follows some of the main Avengers. It splits the group into two teams, and you follow both of the perspectives throughout. It also throws you into the middle of some events, and right into the action with that. I thought it was generally a fine tale of action, but not one that necessarily explores the characters too much.

It’s less about who they are, and more into the actions they take throughout. This is meant for middle grade readers, and it does hit that mark well. There’s a good pacing to this, many of the favorites hero wise and a good selection of areas that they visit.

They include some villains that may be more obscure to non-comic readers, and generally I was just somewhat lost in terms of where this takes place. Not in the sense of physically, but just where in a line of comics this syncs up with. It was a fine story that did feel somewhat self-contained for its conclusion, but also that it was part of a greater selection of stories. 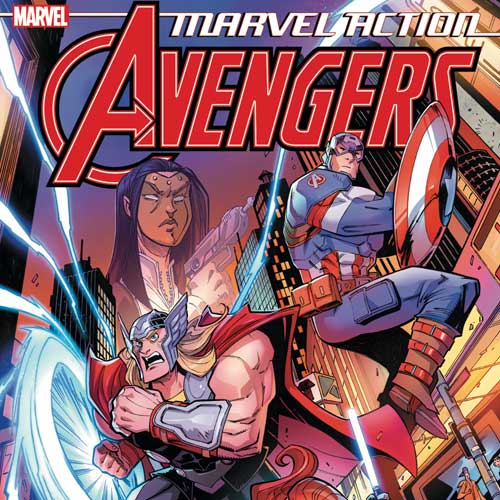 I found the visuals and artwork here to be excellent. There’s a lot of detail in each scene, emotion for the heroes and the backdrops felt expansive. The action was well presented, it felt tense at times and also aimed to move the plot around.

It’s a shorter comic, but it has a nice quality of feel to the pages and that’s appreciated. Each of the heroes have moments where you get to see just what they can do, and it’s neat to see the various powers being mixed together during scenes.

Marvel Action: Avengers The Ruby Egress is a fine choice for its intended reading audience and is just a story split into two perspectives. You get to follow both teams, and gain a bit of an understanding as to the threat they’re facing.

I would have liked more context narrative wise, but it’s a fine adventure and one filled with great visual detail. I was impressed with how the heroes were presented, and for the target audience I think it generally nails it. It’s a good entry way into comics, despite being somewhat simple. Again, it’s for a younger audience and I think it does hit the mark there.