Scooby-Doo! Team-Up Doomed! is a fairly thick compilation of adventures from the Mystery Team as they work within the DC Universe. The crew acts as if they’ve been a direct part of this universe, and it’s rather funny to see. It retains that all audiences style that you’re used to with this team, and many of their signature hunting styles. That basically being a friendly experience for anyone to read.

Mixed in there are a variety of separate tales where the team interacts with heroes and villains of the DC Universe. Some of the mash-ups are solid, whereas others are straight up odd. They pick some neat characters to bring in here, and some that I found rather puzzling as I had never heard of them. The first part of this is a situation with Supergirl, perhaps the best of this package as you get neat interactions. Blue Falcon and Dynomutt, Dog Wonder head up the next one which makes complete sense.

Then there’s a time one that was really weird. Another solid issue follows that, with a creepy swamp one! You find yourself in the Wild West after that, for a female character of that time I hadn’t heard of. Then an ape-full one, that was strange. It then wraps up with an interesting Doom Patrol squad mix. 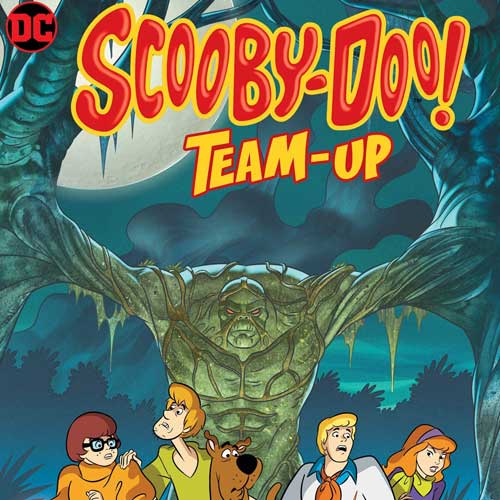 The art style here largely follows the look of what I expect Scooby-Doo! to come across as. The DC characters fit in perfectly well, no matter how wacky they were. The dialogue was always charming, and of course friendly for all ages. This comic collection does a wonderful job of mashing the two universes together without making it seem like they’re distinctly different at all.

It’s basically just another day in the life for the Mystery Team as they arrive to help out the various individuals or teams that they do come across within this series of adventures. It was generally enjoyable, and a solid outing. The visuals of the pages are bright, vibrant and full of detailed life. There’s good care taken with the characters, the various supernatural elements and the backdrops within this.

The Scooby-Doo! Team-Up Doomed! comic package delivers some solid stories, strange ones and generally colorful visuals. The colors really do pop here, and the art style is great. It does capture the style of Scooby-Doo! well while also making sure that the DC characters fit in as well. There’s a good variety of adventures here, and I love how casual the team is in regards to adapting to this world.

They make it sound like this happens all the time, while mentioning some past missions along the way. There’s some good humor here, and it’s a rather enjoyable collection of stories. I enjoyed it for sure, but did find some of them to be a bit too out there considering how rich the roster of the DC Universe is.