Watch Dogs is certainly an interesting series, coming from the games this is a ripe universe to be expanded upon with smaller stories. That’s basically what this one does, it showcases a different sort of surveillance setup that’s been building in Rio de Janeiro and sets that as the backdrop for another style of story.

This tale follows a young hacker named Sauda that has learned her brother has been recruited into a local drug gang. She returns home in order to rescue him, but she’s returned to a place where technology has advanced in terms of everything being watched by a sinister government presence. You do get a good look into the actual character, and some of the beliefs that she does carry.

There’s also a fair bit of action, and some neat twists in how she uses the technology which is what this overall franchise is largely about. That being said, I didn’t find this tale to be particularly intriguing and it came across as somewhat generic. I felt there was more they could have done with this concept, or at least something more different. 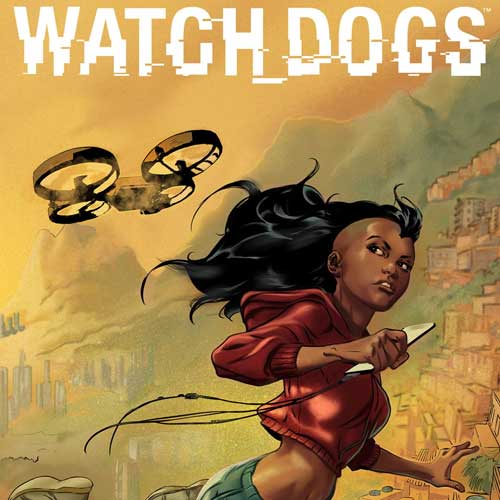 I thought the visuals here were straight up ugly to look at. They were minimalistic, but not in a very appealing way. There wasn’t much detail in any of the characters, or even the world they lived in. It all carried a sort of ugly de-colorized style that was disappointing.

I mean, this is a comic and there are so many options for the color palette. It carried a style that was just so similar throughout without any sort of range and it was disappointing for sure. Mix that with a lack of detail and it just looks bad. I just found it aesthetically displeasing, and that’s my thoughts on the art here which might be a different opinion than others might have with the style.

Watch Dogs: Return to Rocinha was set in a neat location, but carries an ugly palette of colors with minimal designs and a rather boring narrative. I just didn’t quite get into the characters here, and the story felt generic. It’s the same sort of save the family member that’s in a gang sort of thing that we’ve seen before. Mix in some government corruption and it’s been told so many times before.

They had a neat setting, and could have pushed the tech that’s used here in different ways but it came down to basics too much. A bit disappointing, as again I found the overall universe here to be fascinating and full of possibilities. It’s a very reflective design of where modern society could head, a scary one and the hacking angle should always be a fun perspective to explore.