Minecraft RTX beta is almost here, with it releasing on April 16, 2020 for the Windows 10 Bedrock edition of the game. It will bring fully path-traced rendering, physically based materials and NVIDIA DLSS 2.0 to the game. The beta will launch with six RTX Creator Worlds, available for free to showcase the technology. We will also have some incredible coverage of the release on that date too, so stay tuned.

In this beta you will witness realistic hard and soft shadows that are seen everywhere; global illumination realistically lights the world, with that light filling interiors through windows and gaps in the terrain; illuminated blocks and other light sources cast pixel-perfect lighting; reflections are seen on all reflective surfaces and blocks, with a level of fidelity far surpassing that of screen space reflections; light reflects, refracts and scatters through water, ice, stained glass, and other transparencies; and atmospheric effects occur naturally, resulting in high quality volumetric fog, and pixel-perfect god rays. 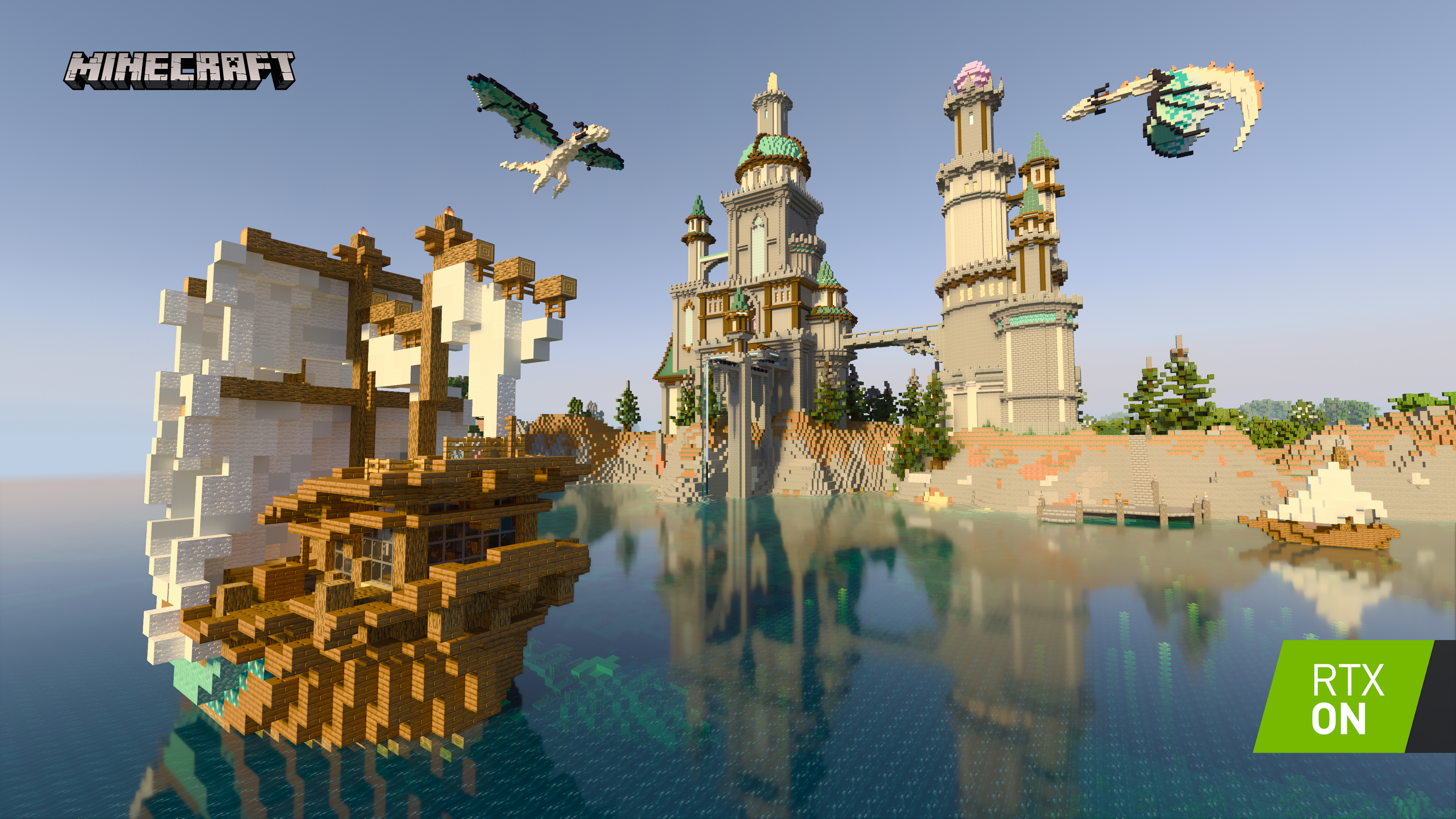 These are the six maps that will be available from top tier creators. All can be downloaded right from the Minecraft Store.

While this is for players on Bedrock, Java maps can be converted over and NVIDIA has provided guides for this process. The next big aspect of this feature is the use of NVIDIA DLSS 2.0 which is a revolutionary real-time rendering technique that accelerates performance via AI based super resolution. Rendering fewer pixels, and using AI to construct sharp higher resolution images that run at faster frame rates.

This is powered by dedicated AI processors called Tensor Cores, exclusively available on GeForce RTX GPUs. This is noted as providing up 1.7x times the performance at 1920x1080 and up to 3x at 4k in this beta. For this beta DLSS is set at Quality mode for 1080p, Balanced mode at 1440p and Performance mode at 4k. 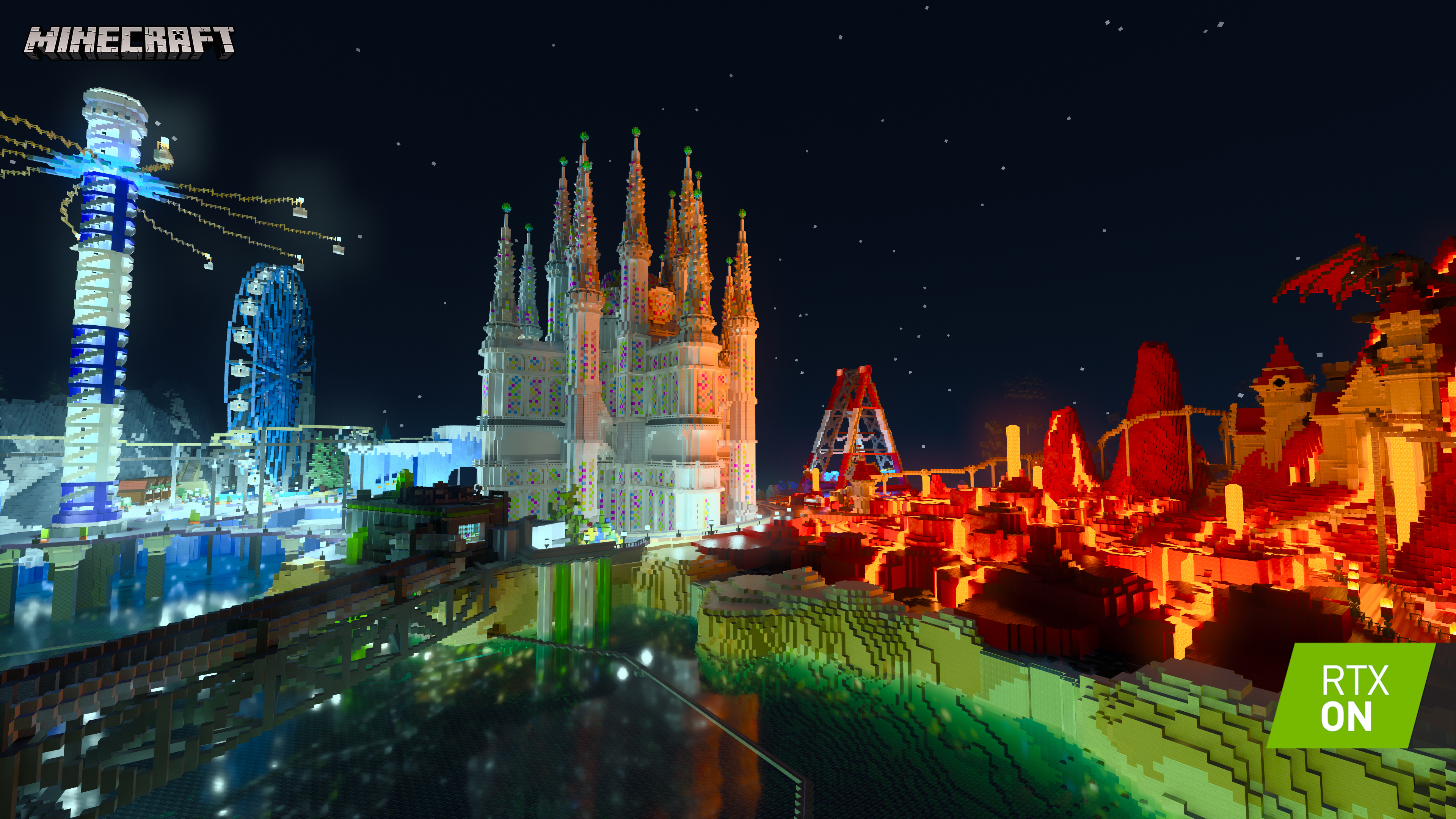 It’s also best to download the game ready driver for this. Some more technical provided information will follow on this technology.

Global Illumination
Games are traditionally illuminated by precomputed lightmaps, Image-Based Light Probes, Spherical Harmonics, and Reflective Shadow Maps, plus artist-placed lights to help force illumination where the aforementioned techniques fail. And while the results look great, the techniques used have several shortcomings, the biggest of which being that dynamic lighting fails to bounce or illuminate beyond the area that the light hit.

For example, imagine a dark room with bright light shining through a window. With traditional techniques, everything that is directly hit by the light is illuminated, but the illuminated areas themselves do not bounce light, and do not illuminate surrounding game elements, when in reality they would.

With path tracing, we can accurately model the dynamic indirect diffuse lighting reflected by one or more indirect bounces off of surfaces in the scene, and have it interact and interplay with other ray-traced effects. Imagine, for instance, sunlight beaming into a castle through multicolored stained-glass window blocks, refracting, illuminating all corners of the room, reflecting off the shiny marble floor, and brightening surrounding detail, causing new contact hardening shadows to be cast from objects.

Reflections
In Minecraft with RTX, path tracing adds ray traced reflections throughout each world, allowing us to reflect every detail, every mob and NPC, and every other visual effect, for pixel-perfect reflections. And using the PBR texturing system, we can vary the level of reflectivity on different blocks, allowing for a wide range of looks, giving us perfect mirrors, smooth water-based reflections, and surfaces with rough and coarse reflectivity. 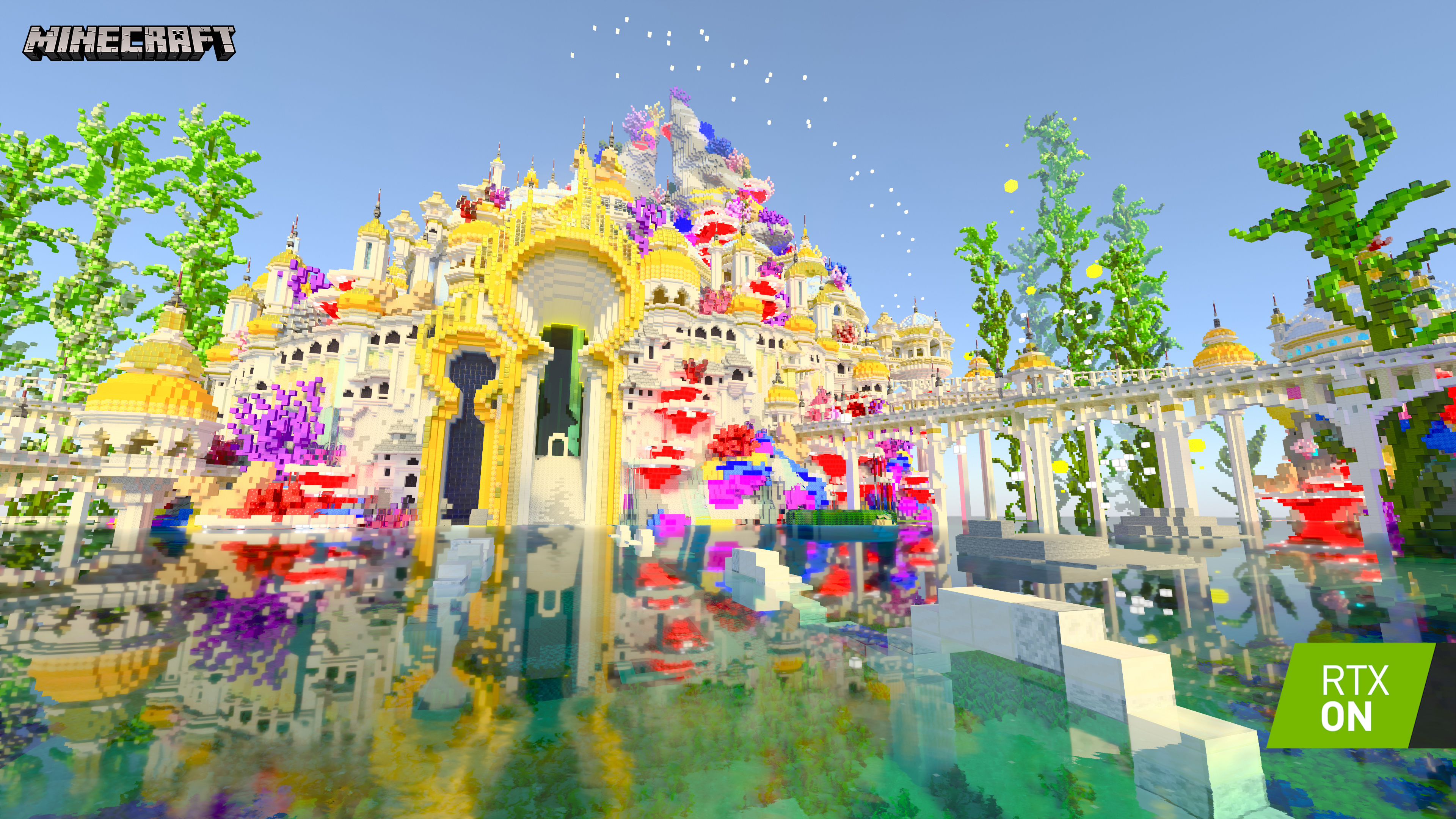 Shadows
With our unified path tracing lighting model in Minecraft with RTX, every aspect of each world realistically and naturally casts shadows, and is shaded and darkened by shadows cast upon them. Shadows soften and harden depending on the distance from the shadow caster, mobs, NPCs and new blocks block light and cast new shadows, and newly-placed light sources (torches, illuminated blocks, et cetera) cast new light that creates new dynamic shadows, and affects existing shadows and shading. Most impressive of all, every single leaf in a tree’s leaf block casts its own individual shadow, adding truly wondrous shadow detail to your worlds.

Per-Pixel Emissive Lighting
All torches and light-emitting blocks in Minecraft with RTX have been upgraded with per pixel emissive lighting. This enables each pixel of these items to emit uniquely colored light that affects their surroundings, best demonstrated by our special disco blocks that display various rainbow colors on an 8x8 grid on each face of each block:

Atmospheric Effects
Path tracing introduces new atmospheric effects to Minecraft, enabling players to build and experience worlds with mist and fog, illuminated by sunlight and moonlight, or the occasional torch or lantern, as seen in movies.

Transparency Reflection, Refraction and Scattering As path tracing follows each individual light ray until it dissipates, we can apply immersive and realistic reflection, refraction and scattering to transparencies, such as stained glass, water, and ice. Using these features, you can create ice palaces illuminated exclusively by the sun and moon, and cathedrals with stained glass murals that fill the interior with colored light as the sun beams through.

We’ll have more information to provide once it’s released. For now, check out our preview of this in action from CES 2020 below, or check out the general Minecraft hub for additional coverage of the title.