The upcoming Netflix Canada May 2020 release schedule has been announced. These are all the big original exclusive series and movies from the streaming service for the month. They include a range of content from completely fresh concepts to exciting sequels or even follow-ups for existing Netflix original releases.

This includes series; films, comedy, documentary, for kids and anime. Beyond original releases are the inclusion of notable other movies that are being added onto the service from third party groups. We are lucky to cover a number of these releases prior to launch and you can see a "Review" tag on what we either have reviews on or will be reviewing around launch so look forward to those.

We try our best to get this list released monthly, so tune in around the start of each month for a brand new selection of what’s to come. Hopefully there’s something exciting to stream, for anyone within the family. 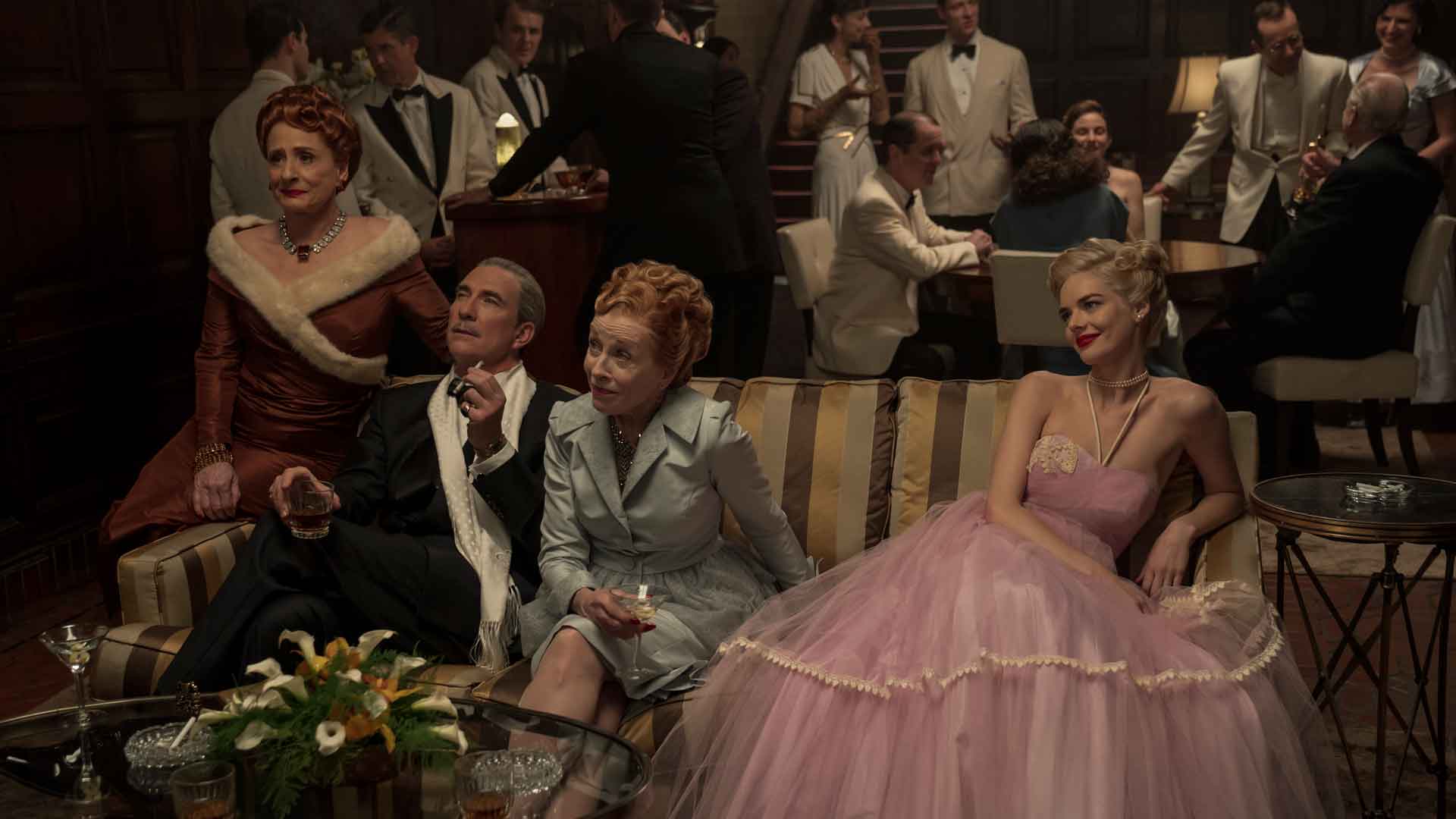 What's new on Netflix Canada May 2020

Original Series and Shows
Hollywood (May 1)
-A new limited series from Ryan Murphy and Ian Brennan, HOLLYWOOD follows a group of aspiring actors and filmmakers in post-World War II Hollywood as they try to make it in Tinseltown — no matter the cost.

Into the Night (May 1)
-When the sun suddenly starts killing everything in its path, passengers on an overnight flight from Brussels attempt to survive by any means necessary.

Dead to Me: Season 2 "Review" (May 8)
-Picking up in the aftermath of that bloody backyard reveal, Jen and Judy struggle to hide a dark secret. With a surprising new visitor in town and Detective Perez hot on their heels, the stakes have never been higher.

The Eddy (May 8)
-Set in the vibrant multicultural neighborhoods of modern-day Paris, THE EDDY tells the story of the owner of a struggling club, its house band and the dangers they face from the chaotic city that surrounds them.

Inhuman Resources (May 15)
-Unemployed and desperate to turn his life around, Alain Delambre is ready to do anything to secure a job at corporate giant Exxya.

Magic for Humans: Season 3 (May 15)
-He’s back to pull a rabbit out of a ... piñata? Justin Willman always surprises with frisky magic skills that amuse and charm, trick and disarm.

The Big Flower Fight (May 18)
-Ten teams of florists, sculptors and garden designers push their talents to the limit to create extravagant floral installations in this competition show hosted by Vic Reeves and Natasia Demetriou. Facing elimination with every task set, these international teams of plant-obsessed artisans will be judged by florist to the stars, Kristen Griffith-VanderYacht and a slew of guest judges for a chance to display their own sculpture at London’s Royal Botanic Gardens, Kew.

Control Z (May 22)
-When a hacker begins releasing students' secrets to the entire high school, the socially isolated but observant Sofía works to uncover their identity.

Trailer Park Boys: The Animated Series: Season 2 (May 22)
-The animated series returns for Season 2, with the entire gang transformed into cartoons.

Dynasty Season 3 (May 23)
-The modern-day reboot of the iconic soap that follows two of America's wealthiest families returns for Season 3.

Space Force "Review" (May 29)
-A comedy series about the people tasked with creating Space Force, a new branch of the U.S. military. From Greg Daniels and star Steve Carell.

Original Film
Get In (May 1)
-On their return from vacation, a family finds their house occupied by disturbing squatters.

The Half Of It (May 1)
-Shy, straight-A student Ellie helps sweet jock Paul woo his crush. But their unlikely friendship grows complicated when Ellie falls for the same girl.

Mrs. Serial Killer (May 1)
-When a doctor gets jailed for a string of shocking murders, his loyal wife sets out to commit a copycat crime to prove his innocence.

Unbreakable Kimmy Schmidt: Kimmy Vs. the Reverend "Review" (May 12)
-Join Kimmy and friends on an interactive adventure!

The Lovebirds (May 22)
-When a couple in the fast lane to splitsville accidentally careens into a murder, they take off on a wild race to find the killer and clear their names.

The Wrong Missy (May 13)
-Tim thinks he's invited the woman of his dreams on a work retreat to Hawaii, realizing too late he mistakenly asked someone from a nightmare blind date.

I Love You, Stupid (May 15)
-After he loses his girlfriend and his job on the same day, a man in his 30s sees his life turned upside down.

Patton Oswalt: I Love Everything (May 19)
-Like the ancient grains of Babylon, Patton provides a healthy dose of witticism in his newest Netflix comedy special, Patton Oswalt: I Love Everything. Enjoy yourself as the Emmy and Grammy winning comedian reflects on hilarious existential anecdotes after recently embracing his fifties, which includes attending his daughter’s second-grade art show that cost him the chance to board a full-scale Millennium Falcon or how buying a house is like hiring a suicide squad of superhuman subcontractors.

Hannah Gadsby: Douglas (May 26)
-Emmy and Peabody award winning comedian Hannah Gadsby stopped the comedy world in its tracks with her genre bending show, Nanette. Having given herself her very own tough act to follow, Gadsby decided to name her difficult second album after one of her dogs in the hopes he could inspire comedy obedience. Did it work? Fortunately, you can make up your own mind because after taking her metaphorical muse off for a world tour of a walk she filmed the fucker in Los Angeles.

Anime
Scissor Seven: Season 2 (May 7)
-Hairdresser by day, freelance hit man by night. The series about an underpaid, scissor-wielding assassin who's not quite cut out for the job returns for Season 2.

Documentary
Have a Good Trip: Adventures in Psychedelics (May 11)
-Celebrities recall their most mind-bending trips via animations, reenactments and more in this comedic documentary exploring the story of psychedelics.

Trial By Media (May 11)
-In our modern media landscape where real courtroom dramas have increasingly been transformed into a form of entertainment, the Netflix documentary series Trial by Media reflects on some of the most dramatic and memorable trials in recent history. Since televised coverage introduced a new emphasis on creative storytelling and showmanship into the legal system, the courtroom has never been the same. Over six compelling parts, Trial by Media explores the many ways in which the press have contributed to reshaping public perception about guilt or innocence before, during or after a trial.

Original Series for Kids
Go! Go! Cory Carson: The Chrissy (May 1)
-The Carson kids win a talent show with a dance that Cory created. But when "The Chrissy" catches on, his sister gets all of the attention!

Chico Bon Bon: Monkey with a Tool Belt (May 8)
-This fun, silly series teaches preschoolers about the mechanical world and how things work. Based on Chris Monroe's picture book series.

The Hollow: Season 2 (May 8)
-After discovering the truth behind the Hollow, friends Adam, Mira and Kai must face their fears and tackle even bigger challenges together.

True: Terrific Tales (May 12)
-Through the magic of the Story Spinner, True and friends create their own versions of Pinocchio, Little Red Riding Hood and other classic fairy tales.

She-Ra and the Princesses of Power: Season 5 "Review" (May 15)
-As the princesses prepare to face Horde Prime and his hive mind army in one final battle, Adora must confront her most elusive adversary yet: herself.