The upcoming Netflix Canada November 2019 release schedule has been announced. These are all the big original exclusive series and movies from the streaming service for the month. They include a range of content from completely fresh concepts to exciting sequels for existing Netflix original releases. 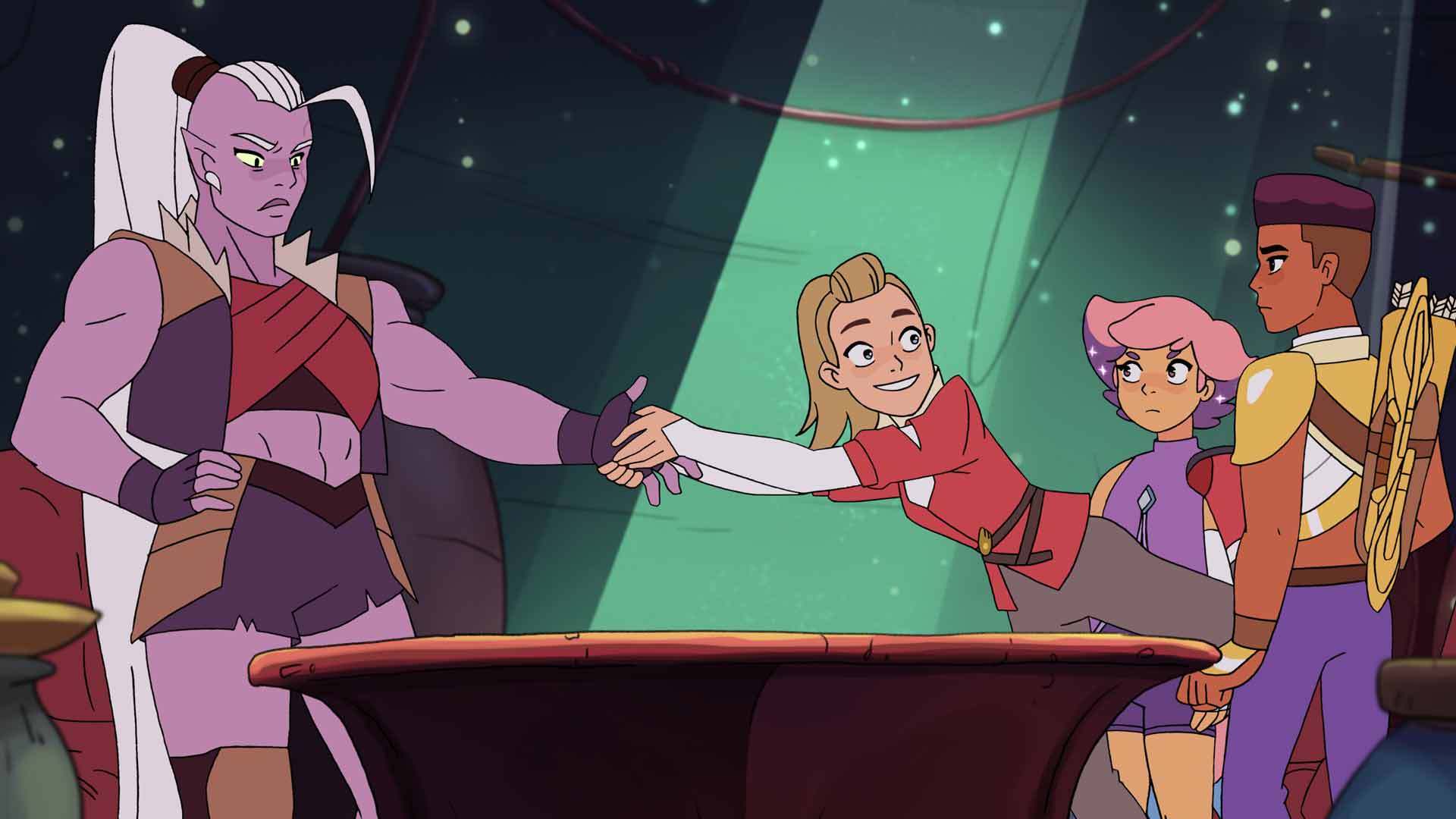 Original Series and Shows
Atypical: Season 3 (November 1)
-As Sam heads into his first year of college, he grapples with new challenges, from making friends to managing his schedule.

The End of the F***ing World: Season 2 (November 5)
-Two years after James and Alyssa's hair-raising road trip, a woman obsessed with the man they killed is released from prison and sets out for revenge.

Busted!: Season 2 (November 8)
-Amateur detectives attempt to untangle a string of mystifying cases, which may be connected to an enigmatic figure known as the Flower Killer.

Green Eggs and Ham (November 8)
-Opposites Guy and Sam take a road trip to save an endangered animal, learning to try new things like hope, friendship -- and a certain delectable dish.

The Toys That Made Us: Season 3 (November 15)
-Take a deep dive into the origins -- and creative battles -- behind Teenage Mutant Ninja Turtles, Power Rangers, My Little Pony and wrestling figures.

The Crown: Season 3 (November 17)
-While England in the Swinging Sixties confronts an economic downturn and fierce nationalism, the royals are scrutinized as aristocratic freeloaders.

Dolly Parton's Heartstrings (November 22)
-The Dolly music you love, the stories you’ve been waiting for. Dolly Parton’s Heartstrings is an anthology series that showcases the stories, memories, and inspirations behind her most beloved songs. New and classic Dolly music will score every episode. Each story will vary in tone, from love stories and inspirational tales to family dramas, westerns, and revenge comedies.

The Movies That Made Us (November 29)
-Get the real story behind the blockbusters that defined a generation. Actors, directors and industry insiders lead the way on essential deep dives.

Sugar Rush Christmas (November 29)
-It's everything you love about "Sugar Rush" -- with a holly jolly holiday twist -- in this Christmas-themed spin on competitive baking.

Original Film
Drive (November 1)
-A notorious thief allies with a street racer for a grand heist involving an elaborate game of deceit with authorities, who have their own dirty secrets.

The King (November 1)
-Hal (Timothée Chalamet), wayward prince and reluctant heir to the English throne, has turned his back on royal life and is living among the people. But when his tyrannical father dies, Hal is crowned King Henry V and is forced to embrace the life he had previously tried to escape. Now the young king must navigate the palace politics, chaos and war his father left behind, and the emotional strings of his past life — including his relationship with his closest friend and mentor, the ageing alcoholic knight, John Falstaff (Joel Edgerton). Directed by David Michôd and co-written by Michôd and Edgerton, THE KING co-stars Sean Harris, Ben Mendelsohn, Robert Pattinson, and Lily-Rose Depp.

Let It Snow (November 8)
-When a snowstorm hits a small midwestern town on Christmas Eve, a group of high school seniors find their friendships and love lives colliding thanks to a stranded pop star, a stolen keg, a squad of competitive dancers, a mysterious woman covered in tin foil, and an epic party at the local Waffle Town. Come Christmas morning, nothing will be the same.

Earthquake Bird (November 15)
-In 1980s Tokyo, an enigmatic expat is suspected of killing her friend, who's gone missing in the wake of their love triangle with a local photographer.

Klaus (November 15)
-When Jesper (Jason Schwartzman) distinguishes himself as the postal academy’s worst student, he is stationed on a frozen island above the Arctic Circle, where the feuding locals hardly exchange words let alone letters. Jesper is about to give up when he finds an ally in local teacher Alva (Rashida Jones), and discovers Klaus (Oscar® winner J.K. Simmons), a mysterious carpenter who lives alone in a cabin full of handmade toys. These unlikely friendships return laughter to Smeerensburg, forging a new legacy of generous neighbors.

The Knight Before Christmas (November 21)
-After a magical sorceress transports medieval knight Sir Cole (Josh Whitehouse) to present-day Ohio during the holiday season, he befriends Brooke (Vanessa Hudgens), a clever and kind science teacher who's been disillusioned by love. Brooke helps Sir Cole navigate the modern world and helps him discover how to fulfill his mysterious one true quest — the only act that will return him home. But as he and Brooke grow closer, Sir Cole begins to wonder just how much he wants to return to his old life.

The Irishman (November 27)
-Robert De Niro, Al Pacino and Joe Pesci star in Martin Scorsese’s THE IRISHMAN, an epic saga of organized crime in post-war America told through the eyes of World War II veteran Frank Sheeran, a hustler and hitman who worked alongside some of the most notorious figures of the 20th century. Spanning decades, the film chronicles one of the greatest unsolved mysteries in American history, the disappearance of legendary union boss Jimmy Hoffa, and offers a monumental journey through the hidden corridors of organized crime: its inner workings, rivalries and connections to mainstream politics.

Comedy
Nikki Glaser: Bangin’ (November 1)
-Following her popular set on Season 1 of Netflix's The Standups, Nikki Glaser is back with her first hour long Netflix original comedy special, Bangin'. Launching globally on November 1, Nikki keeps the audience at the edge of their seat as she delves into taboo topics. Seth Meyers: Lobby Baby (November 5)
-Late Night host, Seth Meyers, steps out from behind his desk and onto the stage at the Pantages Theater in Minneapolis to explain to his fans that you can love a lobby baby as much as a hospital baby...in time. In his Netflix comedy-special debut, Seth Meyers: Lobby Baby, Meyers touches upon family, fatherhood, and why you should never take your girlfriend to Paris for her birthday.

Iliza: Unveiled (November 19)
-Iliza Shlesinger is back in her fifth Netflix original comedy special titled Unveiled. Armed with the newly wed ring on her finger and stories to tell, Iliza pulls back the veil on wedding planning, garters, honeymooning, and the dangers of a zombie bachelorette army.

Anime
Levius (November)
-With the casualties of war still haunting him, young Levius uses his prosthetic arm to take his fight into the brutal world of Mecha Boxing.

Documentary
Fire in Paradise (November 1)
-This short chronicles the Camp Fire tragedy in Paradise, CA, beginning the morning of November 8, 2018. The film charts the course and consequences of the harrowing disaster — part of a terrifying new trend in California wildfires, and the deadliest fire in the United States in over 100 years — through personal interviews and first-hand video footage from survivors and emergency responders.

The Devil Next Door (November 4)
-A Cleveland grandfather stands accused of an Earth-shattering crime -- being the infamous Nazi concentration camp guard known as Ivan the Terrible.

Greatest Events of WWII in HD Colour (November 8)
-From the attack on Pearl Harbor to D-Day, the most pivotal events of World War II come to life in this vivid docuseries featuring colorized footage.

Broken (November 27)
-Broken exposes the unknown fraud, corruption and negligence behind some of the world’s most popular merchandise. Launching just days before Black Friday -- the biggest shopping event of the year -- Broken takes on four big consumer arenas including cosmetics, e-cigarettes, furniture and plastics.

Original Series for Kids
Hello Ninja (November 1)
-BFFs Wesley and Georgie and their silly cat sidekick Pretzel transform into ninjas and enter a magic world, where they solve problems and save the day.

She-Ra and the Princesses of Power: Season 4 (November 5)
-Catra vows to conquer Etheria before Horde Prime arrives, Glimmer struggles with a new role, and Adora and the princesses face treachery old and new.

Harvey Girls Forever!: Season 3 (November 12)
-The girls pull out all the stops to show Harvey Street's newest resident -- child bazillionaire Richie Rich -- the simple joys of being a kid.

Dino Girl Gauko (November 22)
-Kids comedy series set in Japan, Naoko Watanabe is a typical tween ... except that she possesses a strange gift and curse: when her anger exceeds a maximum level, she turns into Gauko, the fire-breathing dinosaur girl!

The Dragon Prince: Season 3 (November 22)
-As Callum and Rayla cross into the magical realm of Xadia, Ezran returns to Katolis as king and faces pressure from all sides.

Trolls: The Beat Goes On!: Season 8 (November 22)
-Explore a brand new season of radical adventures with Branch, Poppy, Biggie and the rest of Troll Village.

Super Monsters Save Christmas (November 26)
-It's Christmas Eve in Pitchfork Pines, and the Super Monsters are joining forces to deck the halls, find Santa's missing reindeer and save the holiday!