Minecraft A Nightmare in Candyworld Interview

A staple I do in all interviews in order to start things off is to ask that you elaborate a bit about your work on Minecraft based content that people might not know?

TRS: We both have been around in the Minecraft community for quite a while now. I used to be pretty active on my youtube channel, The Redstone Scientist, and I created the most widely used tool to make Cutscenes in Java Edition maps called CutscenePRO. Before Everbloom Studios, I worked on a lot of redstone and command block concepts as well as did work on an unreleased map called Wesley which focused on innovative storytelling. I’m very into cinematic concepts and how to make Minecraft into a more cinematic and/or dramatic medium. I’ll be producing a series about the behind the scenes of the Wesley process this summer.

R3D: Yeah, before joining Everbloom Studios, I made a series of large scale adventure maps for Java Edition. Most are part of the Exodus Trilogy, which is a series of maps that are story driven and focus on the future of humanity and potential problems we might face. I try to tie in life lessons and real world issues into the content I make. My last Java Map, Exodus Season 3: Genesis, took nearly two years to make and was a huge learning experience that translated well when I joined Everbloom. I’m currently working on another Java Map, called Song of the Siren, which is set in the same universe and if anyone wants to check it out, I have a few teasers for the map on my YouTube channel, R3DsKingdom.

With this latest release, what were some of the goals of the level and did past projects influence the creation?

TRS: Absolutely. We got a lot of great feedback on our first project, Jurassic Depths. One of the things we wanted to do with this project was provide a better sense of cohesion. Jurassic Depths suffered from some problems arising from poor communication between the developers and the builders and so we really wanted to integrate everyone more deeply into Candyworld’s process. One of the biggest problems with Jurassic Depths was that every part of it felt separate from the others.

In other words, none of the puzzles built on themselves and the opening felt very out of place from the rest of the map. We sort of got all the exposition out of the way early on. It was important for us to tell a story that continued strong from beginning to end in Candyworld. We’re all extremely proud of this project and it feels like we have successfully improved upon every single area that Jurassic Depths fell short on. We worked together like a strong and powerful team and that is an incredibly satisfying feeling.

R3D: I agree, our team has definitely improved since the release of Jurassic Depths. A Nightmare in Candyworld is actually based on some of the gameplay from my first Java map, Exodus Season 1, that I released way back in 2014. But this time focused on a stronger story, characters, and more engaging gameplay. 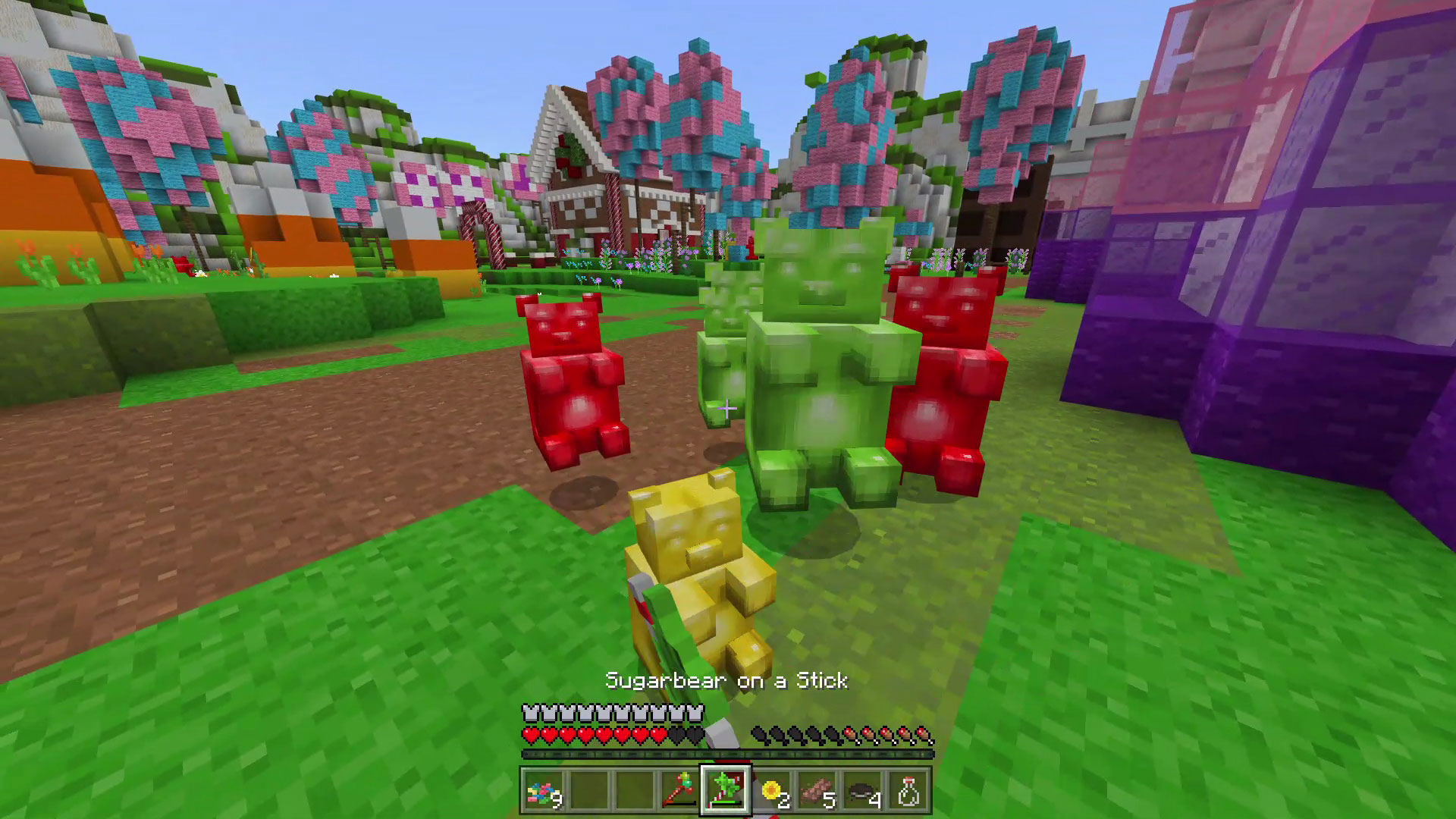 This is a really narrative driven adventure, where did the concept for the story come from and could you give us a bit of context on the opening setup?

R3D: Originally the story was a lot darker and more focused on the concept of “The Nightmare.” I don’t want to spoil anything, but after you play the map, you’ll know what I’m talking about. As a team, we decided that the original concept was a bit too complex, so we altered the idea a bit to feel more like a classic storybook with quirky characters and its own unique spin. The map starts with the evil Lord Sugar Bones kidnapping King Candy in an act of revenge. The player, a Candy Knight, joins forces with an adorable fairy named Sugarrush as they travel across the land to rescue their king, meeting many strange characters along the way.

Candy is obviously a big theme within this world, what treats did the team feel were essential to be included and what was the process behind decorating Minecraft with this style?

TRS: Phew. That’s a big question haha! Originally our concept actually was just going to be “Chocolate World.” But after some discussion we realized that would have been too bland in our color pallette. There is a Chocolate Canyon in Candyworld however, but there are a lot of cookies and cakes which make the landscape more interesting. A Nightmare in Candyworld is divided into four chapters. We wanted each chapter to be loosely themed around a different type of Candy or setting. Chapter 1 takes place in Candy Castle. Chapter 2 is themed around gummies, candy corn, and similar sweets. Chapter 3, as I mentioned, takes place in Chocolate Canyon. And… I won’t give away anything about Chapter 4 as it doesn’t really fit into the mold of the rest of the chapters. You’ll just have to play and find out for yourself!

There are many enemies players face, could you tell us about the difficulty options and what creatures one might come across while playing?

TRS: Yes. There are quite a lot of unique enemies in this map. I don’t want to give them all away, but I will say this map is very very hard. We noticed it especially on mobile devices so we allow the player to choose one of three difficulty options in the beginning. Normal, which is recommended for mouse and keyboard or a controller, and Easy and Super-Easy which each give you positive status effects to help you beat the game. A quick preview of what you might encounter: A giant rainbow gummy bear, banshees, candy cane archers, it’s really quite an extensive enemy list.

This is a very large build, what’s the process behind developing multiple separate areas and having them work as a cohesive tale?

TRS: As I mentioned before, the key to creating a cohesive experience in any map or any other game is good communication and teamwork. Everbloom is sort of split into a Developer Team, a Build Team, and a Designer Team. In the past we were too isolated in the separation of these teams. The key to a successful process and a successful product is for all the teams to work together, but also separately. Together in the sense that the vision belongs to everyone but separately in the sense that each team works within their own specialities.

When those two concepts work in harmony, you get a collaborative and fun process that also ends up feeling like one unified product. In terms of this specific project, we had a lot of concept art done which was very helpful. R3D, who wrote most of the story, drew some overhead views of the different areas and then worked with the Builders to translate that into the game. This is something we never did in Jurassic Depths and was vital to this process. You can actually see all of our concept art in the credits at the end of Candyworld.

R3D: It’s pretty impressive that the build team was able to make sense of the concept art and map area layouts I gave them. I never claimed to be an artist. But as TRS mentioned, with this project in particular, the different teams worked really well together to bring the whole project together into something we are really proud of.

How does the team balance having a mixture of combative and puzzle focused sections within the world?

R3D: The balance is focused on the rise and fall of action within the plot of the story. So in sections where action is high you will have more combat focused areas and in slower more plot driven sections you will find the opposite.

TRS: Candyworld was actually finished about two and a half months ago but sort of got stuck on its way out due to technical issues. We’re so happy it’s finally time to show the world our project. R3D: It’s been hard to sit patiently as the various issues came up and were resolved, but we’re all looking forward to everyone checking it out and experiencing the story we created.

TRS: We’ve gotten excellent feedback thus far and I think this is going to be an experience to remember for every player that purchases it. This is the best we’ve created as a studio so far and we’ve got a lot more exciting projects on the way!