A staple I do in all interviews in order to start things off is to ask that you elaborate a bit about your work on Minecraft based content that people might not know?

Tom: Something people might not know about us I that we were originally a building only team. Only when the Marketplace was announced did we get into map making. Jurassic Depths was our first map-making experience as a team, and for most of the builders their first interaction with what command blocks could do.

Could you briefly describe the projects you’ve released on the Minecraft Marketplace thus far?

Ultimate Pig Race: Multiplayer and Single player racing game. As the player you race to the finish on a pig and can use various powerups to disable your opponent and take the lead.

Dragon’s Attack: A survival spawn by Hytherdel (our organic expert), which hosts one of his amazing dragons! 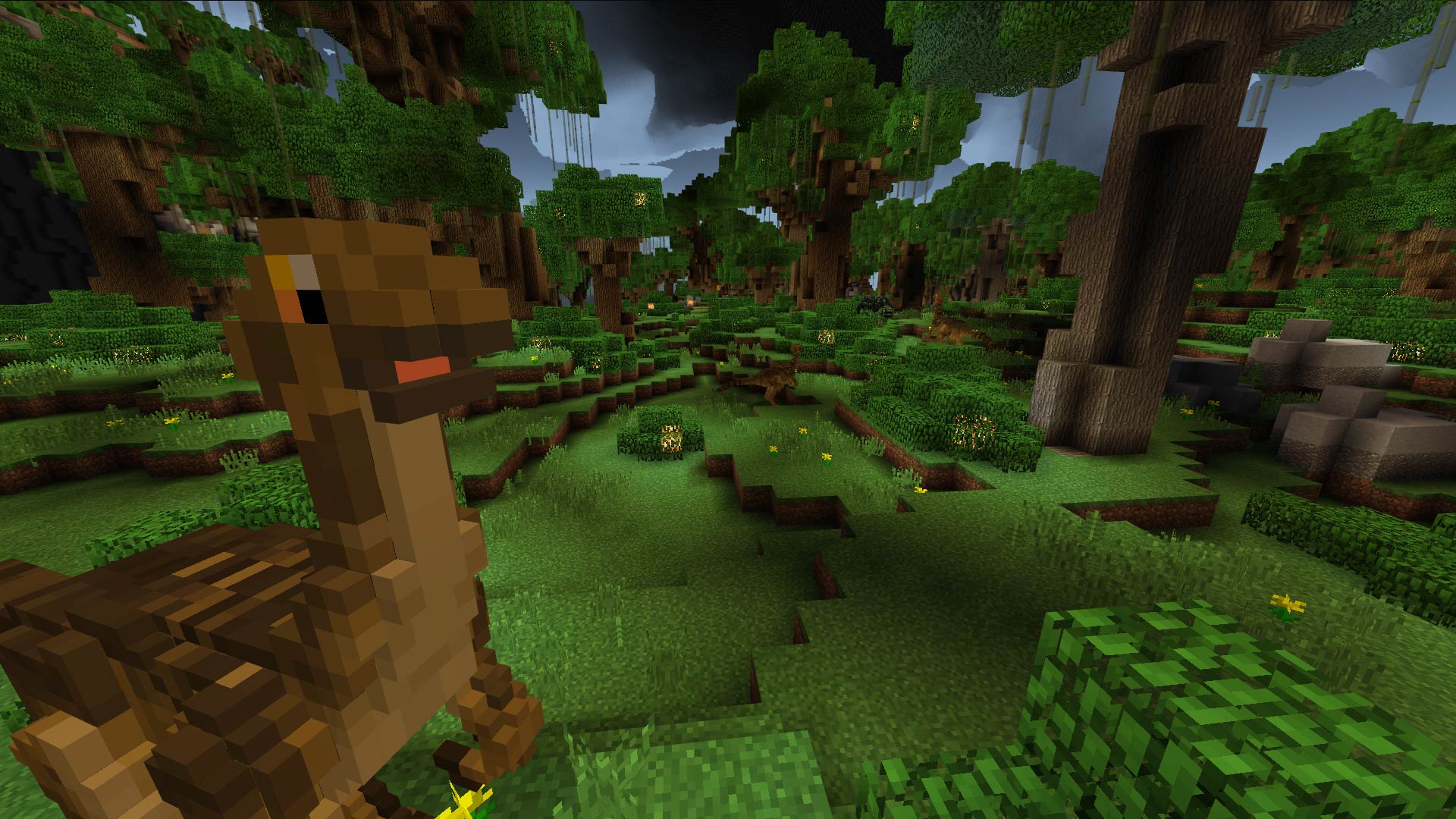 Focusing on the first release “Jurassic Depths" where did the general idea for the narrative come from and how did that get applied into an adventure?

Tom: We knew we wanted to do a story driven adventure map. From looking at some of the limitations bedrock had at the time (there were many), we concluded that we couldn’t pull of a rich questing system or any of the other things we would have really loved to do. We did know that a puzzle map should be possible.

We took inspiration from Horizon Zero Dawn, Breath of the Wild and the Code (an awesome puzzle map by Jesper the End). As for the narrative, we knew we wanted dinosaurs in the map, and we thought it would be very interesting to have our puzzles based on a time travelling mechanic, as this would add another dimension that’s usually not seen in Minecraft, so we brainstormed as a team and had come up with this pocket watch the player could use and the underground ecosystem with glowfruit, which explained why the dinosaurs where there. Our storywriter R3DsKingdom filled in the gaps and wrote the script.

What were some of the challenges involved in creating this map and what key gameplay components were the focus while developing it?

Tom: I think our biggest challenge as a group was co-ordinating between the build team and the gameplay team. When we look back at Jurassic Depths a lot of the flaws we see in it were caused by a lack of communication between the two team (things like the main cave being too large). So this is something we have been working hard on as a team and there’s another story driven adventure map coming out in Easter, which should be a lot more enjoyable for the player.

Another big challenge was getting the models right. The UV mapping for them was incredibly challenging to get right and we actually had to code some unique software from the ground up, to convert our models into Minecraft (which did end up with us having some of the most detailed models in bedrock).

Looking back, some challenges we might have ignored were the tutorial sequences and puzzles. Some of the puzzles were not cohesive with each other, some were too difficult in hindsight. A lot of the players found the tutorial sequence very long, which we totally agree with. It takes about 10-15 minutes for the player to see their first dinosaur, which is definitely too long in hindsight.

There’s a mix of puzzle and story based elements, how did you find balance when working with these and were there any inspirations for two aspects?

Tom: We came up with the mechanics that would serve as the base for the puzzles first, and build the story around that. I think this was a good decision as it made the story link directly with the puzzle mechanics and there wasn’t any part of the story that you wouldn’t see back in the puzzles.

Could you go over the work behind the dinosaurs? I was really impressed with thehigh level of quality for the creatures. Have any particular favourites?

Tom: What we did for the dinosaurs is develop a completely unique tool to convert blender models into Minecraft. This allowed us to do much more detailed models than any other team at the time would have been able to. That along with the brilliant texture work from Monsterfisch made for some great models overall. We still use this technique to this day as we think it gets a much better result than some of the tools out there at the moment for map makers to use. One of the limitations we still have is that we can’t to angles (yet).

What was it like becoming an Official Minecraft Partner and do you find this program beneficial for the promotion of your created content?

Tom: We had been working in Minecraft as a business for a while before we became an official partner; mainly doing server commissions. But these were slowly starting to be less fruitful, so the Minecraft Marketplace really came as a blessing to us, as it was a way to make a stable income doing what we love.

It’s absolutely been beneficial for the promotion of our created content, the views we get on the Marketplace are a lot more than we would ever get before on Twitter, Planet Minecraft or YouTube. It also gives us some reserves which we can spend on developing our other channels, like our YouTube channel, which is getting a lot of cool new content soon!

Are you able to tease any upcoming projects for the Minecraft Marketplace or perhaps any sort of genre of map type you’d like to attempt in the future?

Tom: As I’ve said before we’re really excited about the story driven adventure map coming out around easter! It’s more action based than Jurassic Depths was, and we’ve incorporated some of the key takeaways from Jurassic Depths into this new map. We think you’ll love it!

Tom: I’d just like to thank everyone who plays our content on behalf of the whole team! It means so much to us to be able to do what we’ve always wanted to. As a player you are making dreams come true! I also want to thank everyone who gives us feedback on the maps we release, we’ve learned some great lessons from your feedback, and since we’re so new to map-making as a team, any feedback you have is incredibly useful for us!