Lauren: This is my first job in gaming. I started playing Minecraft back in 2012, and got involved with the Noxcrew after bumping into them at a couple of the Insomnia Gaming Festivals that take place in the UK.

My first project with them was the awesome Terra Swoop Force (I’m the voice of Ely, the thermal flight armour); I then joined the team full time when the Bedrock Marketplace opened and this is my first experience as Project Lead! 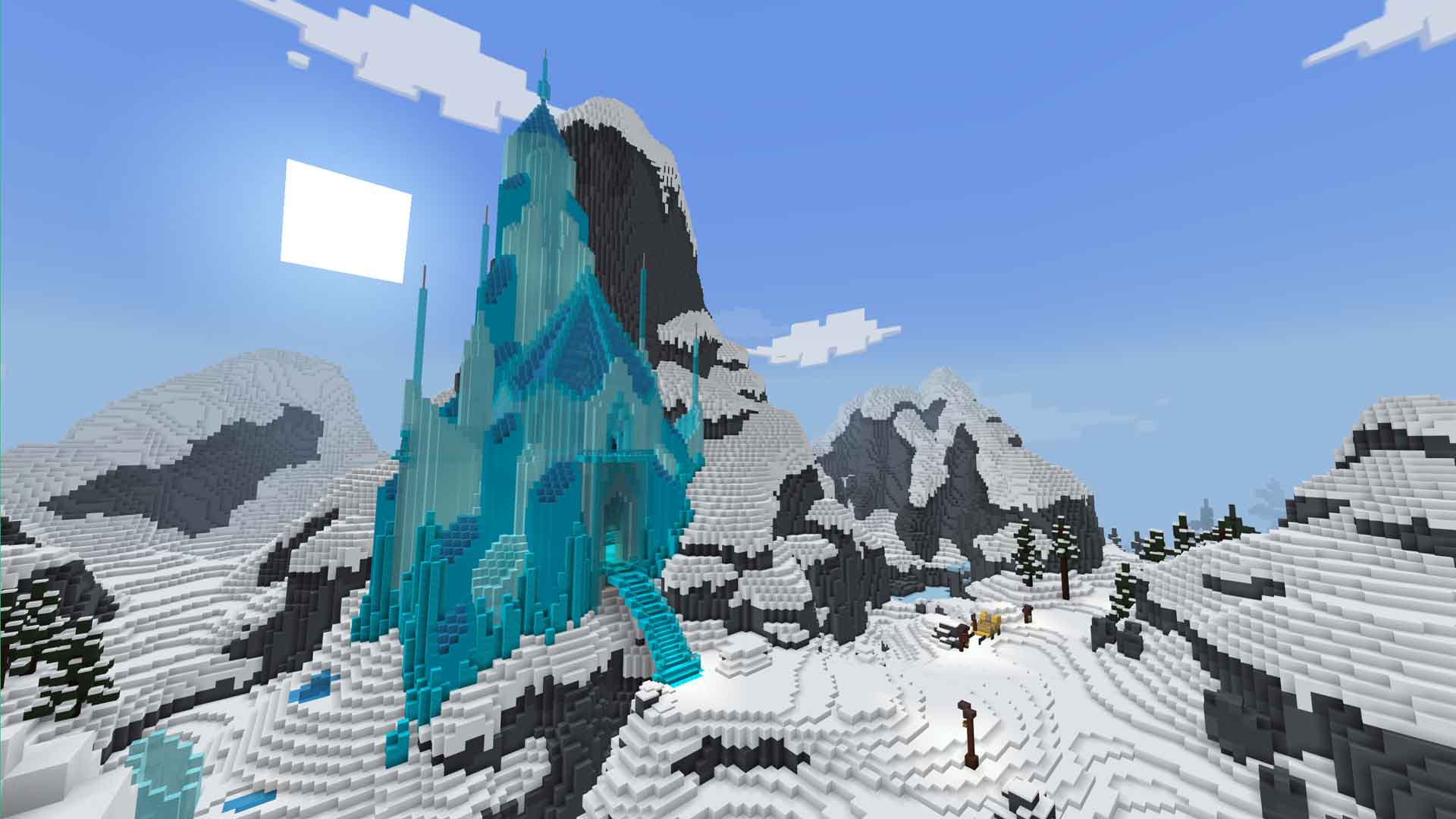 It’s noted you were the Project Lead on the Noxcrew’s Frozen map, what was that like and were there any challenges with getting the map developed?

Lauren: It was amazing! I haven’t really been too involved with Noxcrew’s creative process before (aside from a little voice acting) as I work more on the marketing side of things, so they really threw me in the deep end with this one as a first project. Thankfully our team is made up of a bunch of really experienced map makers, artists, and level designers, so the problems that we encountered were fairly minimal.

Disney were super excited about our world ideas, particularly our mini-games, so there really weren’t very many issues during development in that regard. The thing that took the most time was trying to make the world feel as close to Frozen 2 as possible. It took multiple tries to perfect some of the textures, particularly for Arendelle Castle and Arendelle Village which both changed quite significantly between the two movies.

It’s really quite amazing to get a Disney partnership for a Minecraft world creation, what was that process like?

Lauren: We actually weren’t involved with the process at all. The ‘Minecraft Meets Frozen’ project was agreed upon before we were brought into the picture. We were asked by that Marketplace team if we would be interested in taking on the project. It was such a huge opportunity, we had to say yes!

What were some of the key goals heading into production of this map, and generally how long did it take for the team to finish this particular project?

Lauren: Overall the project took around five months to complete. It was the first time we’d worked on a project like this, and so we had to adjust our usual working methods and add in extra time for communications between ourselves, Microsoft and Disney so that they could review what we were up to.

The main goal for me was to make sure that players really felt like they were stepping into Arendelle when they opened the world. While I knew our builders and artists would be able to handle making the world look like the films, for me a huge focus was making sure that the smaller details were tended to, such as selecting the right music tracks, designing how the crystals worked, and choosing which characters were placed in the world and where. 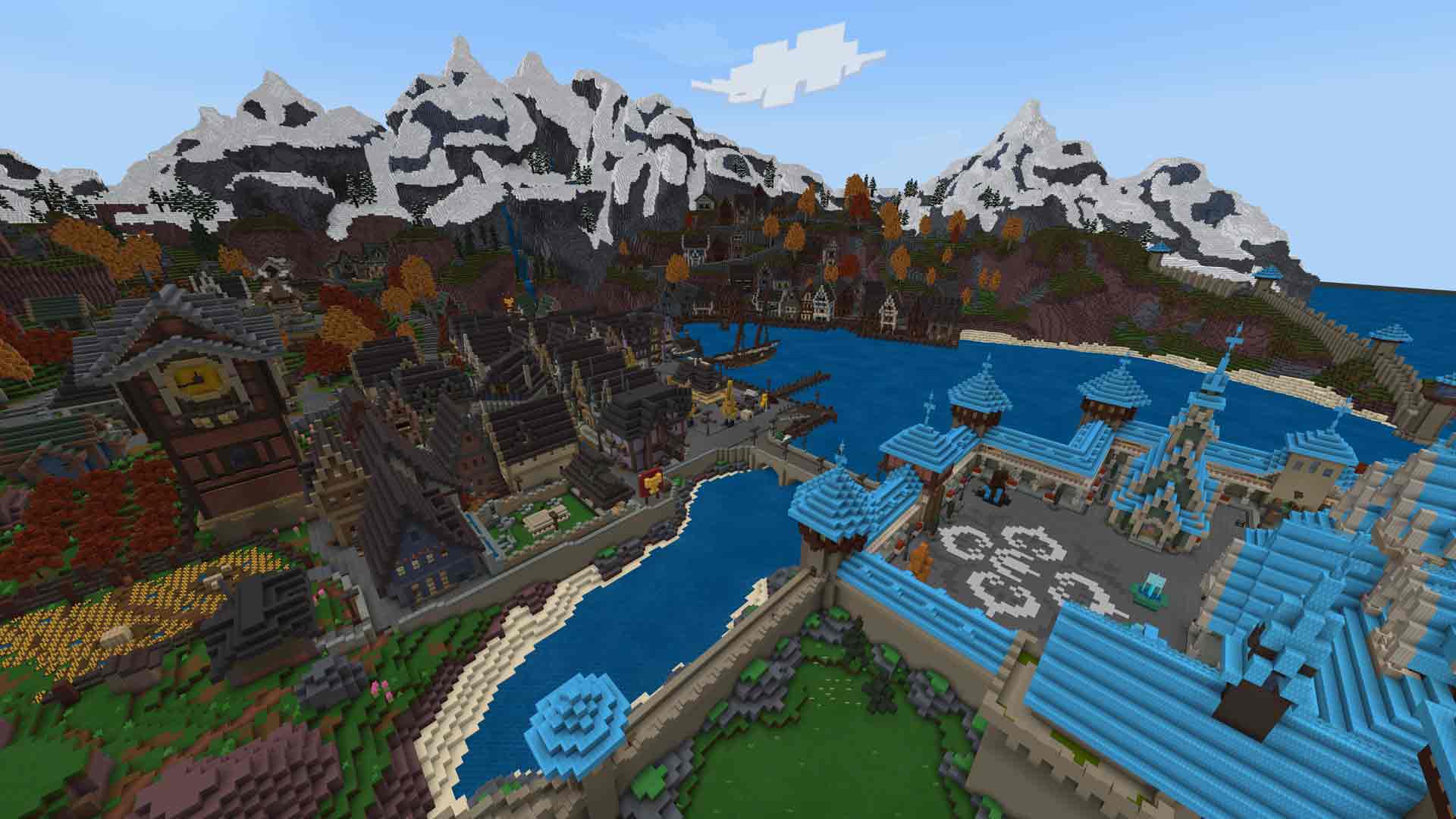 When looking at the map it covers both of the films in fairly great detail, was the team given an early look at the sequel or perhaps concept art for inspiration?

Lauren: Disney were really keen on focusing on Frozen 2. We weren’t able to watch the film which was still in development (and full of lots of closely guarded secrets), so instead they did what they could to provide us with screenshots and assets to allow us to get a good idea of the look and feel of the second film.

We also had the chance to fly key members of the team out to LA to meet with a couple of Producers who did a presentation about the film and talked us through the story; we spent a few hours throwing around ideas and working together on incorporating Frozen 2 into our initial plans for the world.

I found the teleportation, and spawn systems to be very well done. Where did the idea for those come from, and what was the process like getting that integrated?

Lauren: Thank you! It was important for us that the players had the chance to explore the world and stumble across each of the big landmarks on their own, but we knew that with a world of that size it might get a little tiring trying to get from one mini-game to the next on foot.

We needed to design a quick travel system that wouldn’t feel too out of place in the 1800s when the stories take place, so I came up with the idea fairly early on of having landscape paintings in ornate frames depicting each area that the players could unlock as they explored the world for the first time. Fun fact: the first iteration of the portraits included the ability to walk through the paintings to get to your desired destination, but this didn’t fit with the way that magic works in the Frozen universe so we switched to buttons.

I thought the mini games were very interesting, how were they selected and do you have a personal favorite?

Lauren: One of the first things we did when we accepted the project was have a team viewing of Frozen and take notes on standout moments and favourite areas that we’d like to cover, and this inspired a lot of conversations about potential mini-games. We have a big Google doc from that first meeting where everyone scribbled down their ideas; there are some absolute gems in there that never made the cut, for example a dance mini-game that was inspired by the Duke of Weselton at Elsa’s coronation!

My personal favourite game is the Water Nokk Challenge because of the use of the crystals. That game was the longest in development, with some big changes being made just days before launch, and at one point we weren’t certain if it would make it into the world. Avondale, our Content Manager and Lead Mechanic, managed to turn the game around overnight with the help of our builders and it’s a fantastically unique game. I’ll also give a special shoutout to Snowgie Scurry which is just brilliant!

There are a number of secrets, or well things to collect in this. Could you go over what sort of special items players can find and perhaps a bit about how they were chosen as collectibles?

Lauren: Our three collectibles in Frozen are baby reindeer, baby trolls, and snowgies. As soon as I watched Frozen Fever, I knew that I had to include Snowgies in the world somehow. They’re just the funniest little things!

The trolls were also a no-brainer, with them being so cute and I liked the idea that they would blend easily into the terrain so would be slightly more difficult for players to spot. The reindeer were suggested by a producer at Disney due to their presence in Frozen 2. Also, they’re just adorable!

Are you able to tease anything Noxcrew might be working on in the future, or perhaps go over some other recent releases?

Lauren: We put a couple of projects on hold when we started Frozen, and we’re just picking them back up now. There are some pretty exciting things coming next year, including the largest world we’ve ever released, and a sequel to one of our original Marketplace maps.

For a more fun question, do you have a personal favorite Frozen song, and have you seen Frozen II?

Lauren: I’ve only seen Frozen 2 twice so far… And that number will definitely be going up!! I’ve been a huge Frozen fan since I watched the first movie a couple of years ago. The idea of sisterly love being the love that unfroze Anna at the end of the first film really spoke to me because of the relationship I have with my two sisters.

I regularly sing the soundtracks to my cat Millie (she’s my biggest supporter) and my favourite song right now is Show Yourself. During the song, Elsa is letting go of her uncertainty and is filled with confidence and self-belief, which is something that I’m always striving for. That song is so empowering! Some Things Never Change and For The First Time In Forever are also big favourites of mine.

Lauren: I’d just like to say thank you to everyone who’s played the world and sent such wonderful feedback, and to Noxcrew for putting their faith in me!