The game you know and most likely love is getting a massive upgrade. That’s right, Minecraf NVIDIA Ray Tracing is now going to be a thing for the Bedrock Windows 10 version of the game. It’s also mentioned that additional platforms may have enhancements down the road. This is a two part upgrade to the game, Ray Tracing is one aspect and Render Dragon is the other one. The latter is the latest engine overhaul for the game.

This news follows the cancellation of the Super Duper Pack and appears to be a replacement. Going back to Ray Tracing, devices on Windows 10 capable of DirectX R, such as the NVIDIA GeForce RTX GPU will be able to experience this upgrade. They’re also looking at expanding on other future platforms that support DirectX R raytracing. You’ll be able to experience realistic lighting, vibrant colors, realistic water that reflects and refracts naturally along with emissive textures that light up. Emissive is the power to radiate something, especially light, heat or radiation. 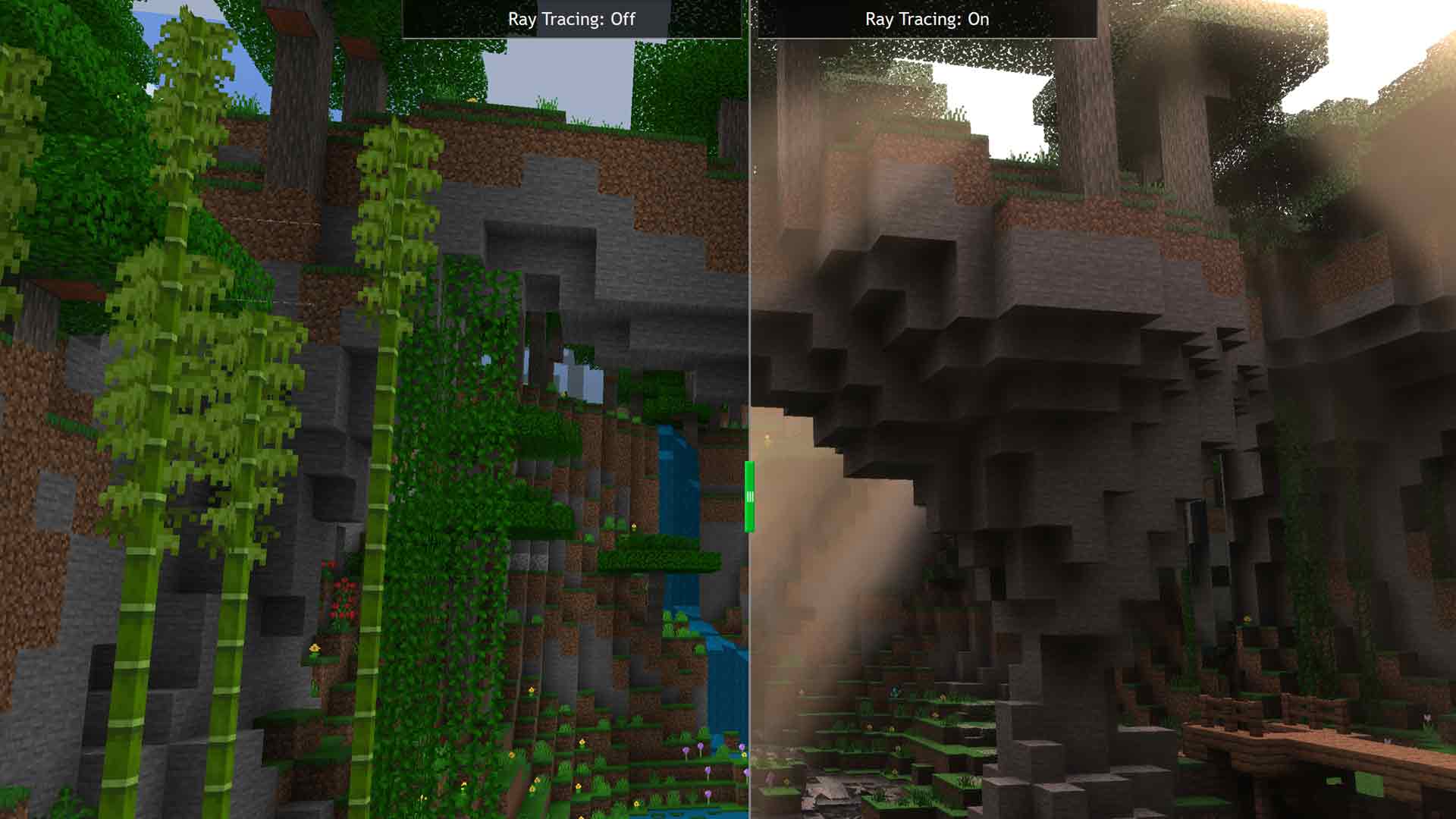 More details will be present in the future, and it’ll pop up in the main beta menu as “Optional graphics with RTX”. That is mentioned as being available in the new year. The Render Dragon engine will be present in Bedrock platforms over the coming months. A preview might have been noticed during the Apple’s Worldwide Developer Conference which featured Minecraft Earth.

This update will feature edge highlighting and new lighting techniques which is just the start of visual and performance upgrades that are planned for this fresh engine. Not all devices will support Ray Tracing, but graphics upgrades will be present on most devices regardless because of this engine.

Other details provided from NVIDIA’s side of things are as follows. With Mojang, they have aimed to reach a stunning new level of realism. This is through the introduction of real-time DXR raytracing for Windows 10 edition. It will have path tracing, a form of ray tracing featuring incredible levels of detail, affecting almost every pixel of every scene. You’ll see life-like lighting, reflections and shadows. They also mention this demonstrates why game developers like Mojang and Microsoft are working together with NVIDIA to enhance upcoming blockbusters with ray tracing.

The following quote was noted. “Ray tracing sits at the center of what we think is next for Minecraft,” said Saxs Persson, Franchise Creative Director of Minecraft at Microsoft. “RTX gives the Minecraft world a brand-new feel to it. In normal Minecraft, a block of gold just appears yellow, but with ray tracing turned on, you really get to see the specular highlight, you get to see the reflection, you can even see a mob reflected in it.”

With ray tracing, nearly everything is visually improved. Lighting is upgraded to real-time global illumination, enabling light to realistically illuminate blocks and buildings as the world is modified. Emissive blocks such as Glowstone and Lava can illuminate environments. This, along with other dynamic game elements. Water, glass and other reflective surfaces show accurate real-time reflections, mirroring their surroundings.

Shading and shadowing gain life-like accuracy. Clouds, fog and other atmospheric effects naturally change the look and feel fo the world. Blocks gain extra depth and detail from normal maps, enabling shadows, lighting, specular reflectivity and ambient occlusion to further increase their fidelity and appearance. The entire game is enhanced, a complete overhaul. This will also be moddable, enabling players to generate endless ray traced content for themselves and others. The trailer is available below. You can about taming foxes below, or check out our hub for expansive coverage of the title across all platforms.